You are here: Home | America adds a shameful chapter to the history of torture

I’m on sabbatical in Vienna and, having burned out on art museums (if that is possible), yesterday my son and I visited the Folter Museum. Folter means “torture” in German.

The museum has on display darkly lit dioramas depicting in chilling detail the horrors and genius that have gone into causing other humans pain. Most of the implements come from the late Middle Ages to the 19th century. 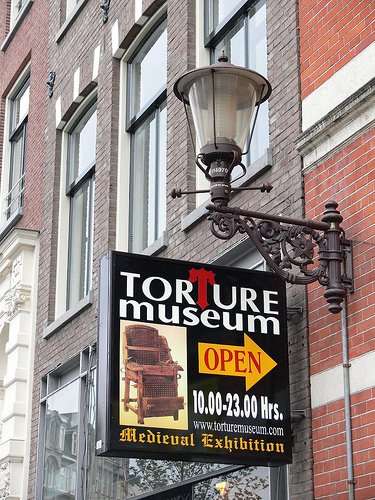 How could people do this to each other? I wondered as I passed iron and wood tools specifically designed to inflict pain, humiliation, and horror. I kept thinking how glad I was that I did not live in Medieval Europe when such abject cruelty was regularly practiced. That is, until I got to the last display – American use of torture in our day.

Torture. A word that in my lifetime I would never have guessed would be associated with the United States of America. Torture is wrong. Always. Why? What do you do when certain people hold information so dangerous that not disclosing it might lead to the destruction of multitudes?

Such was the question facing Fredrick Spee von Langenfeld, a priest assigned to those imprisoned for committing unimaginable evil. These were prisoners whose guilt had been established by the most reliable methods of criminal investigation. Most had even confessed to the crimes. But their circle of associates had yet to be captured and it was paramount that they be found, for they were known to be planning further mayhem.

Should they be tortured to reveal these associates before the attacks were carried out? The official government response was that torture was justified. Given the malicious barbarity of the attacks, torture was deemed the only way to reliably ensure there were no more victims.

The crimes were particularly dreadful, you see. Under the cover of night the prisoners had flown on specially anointed branches, goats, donkeys or even on the backs of demons to a great Sabbath gathering where they had kissed the behind of Satan and then joined in a feast of sacrificed children. The year was 1647.

Spee spent a great deal of time with these prisoners, and although he believed in the possibility of these crimes, he began to realize that torture was useless for retrieving reliable information, and the effect of torture was in all cases inhumane. He found that the confessions extracted under torture were next to useless because people would say anything, turn in anyone, confess to whatever was required of them, in order to stop the pain.

He found torture set up webs of betrayal that caused innocent people to be seized and imprisoned. And as this web of misinformation expanded under more and more torture, the web of innocent victims grew.

In 1631, Spee anonymously published Cautio Criminalis, a book on the witch trials. It had to be published without revealing his identity because anyone showing support for the witches was judged to be in league with them (sound familiar?).

George Bush: Torturer in Chief
George Bush claims to be a Christian — a follower of Jesus Christ. He may indeed believe in Jesus, but his behavior shows he is not a follower of Jesus.
Bush Defends Interrogations, Saying Methods Aren’t Torture
Torture by any other name is just as vile
Carter: U.S. has tortured detainees and Bush approved it
The horrors really are your America, Mr Bush

These crimes were special, called crimen exceptum, exceptional crimes, crimes so heinous that the perpetrators deserved no representation; they could be held without due process; the nature of their crimes stripped them of basic human rights; they could be tortured.

In his book, Spee argued that all these activities were inherently wrong – that even in such horrific cases, people deserved their rights.

The problem is that torture destroys souls – including the soul of the torturer. In a rewriting of Shakespeare’s reflection on mercy in The Merchant of Venice, I suggest that the “the quality of torture is strained,” for it “curses him that gives and him that takes.” One cannot torture without losing one’s soul. Whether that one be a person, a community, or a nation, to engage in torture destroys the torturer.

Could I be induced to torture another? What about the oft-quoted, “Suppose someone knows where your daughter is being tortured, would you torture the person to get the information?” I would; I would try anything.

Some things might be worth the cost of my soul. I would, however, be damaged. I doubt I would ever recover. True, my actions would in some sense be justified. But the stain would be deep and in many ways part of my humanity would be lost.

The judgments of history I suspect will require an accounting from our government leaders for their participation in what can only be seen as a massive step backward in the advance of rationality, humanity, and freedom begun in the Enlightenment.

It is time to forever put torture aside lest we enter again into the dark ages when witches were tortured and civilization itself lost its way. Standing before that last display of the Folter Museum, I realized that the soul of our nation has been damaged and we have lost the moral authority we once held. This has to stop.

STEVEN L. PECK is an associate professor in the Department of Biology at Brigham Young University.

(Listed if other than Religion News Blog, or if not shown above)
Steven L. Peck, The Salt Lake Tribune, Mar. 7, 2008, http://www.sltrib.com