Washington – US President George W Bush Saturday vetoed a law that would prevent the CIA from using torture-like waterboarding and other forms of coercion on prisoners.

The move provoked charges by Congressional leaders that Bush was compromising the nation’s moral authority and putting American military and diplomatic staff at risk of harsh interrogation tactics abroad.

George Bush: Torturer in Chief
George Bush claims to be a Christian — a follower of Jesus Christ. He may indeed believe in Jesus, but his behavior shows he is not a follower of Jesus.
Bush Defends Interrogations, Saying Methods Aren’t Torture
Torture by any other name is just as vile
Carter: U.S. has tortured detainees and Bush approved it
The horrors really are your America, Mr Bush

Bush said the law would bind the hands of the CIA in questioning “hardened terrorists.”

“It would eliminate all the alterative procedures we have developed to question the world’s most dangerous and violent terrorists,” Bush said in his weekly radio address.

The bill passed Congress by margins too narrow to provide the two- thirds majority needed to override the veto. It would require the CIA and other intelligence agencies to follow US army regulations in questioning prisoners.

“The president has once again compromised the moral leadership of our nation,” said Senate majority leader Harry Reid, a Democrat, in a statement.

The opposition centre-left Democratic leadership provided a list of military leaders, including General David Petraeus, commanding general of Iraq, who believe torture is wrong and fails to obtain good information.

In intense debate since December, the White House has refused to rule out the possibility of using waterboarding, which simulates drowning. 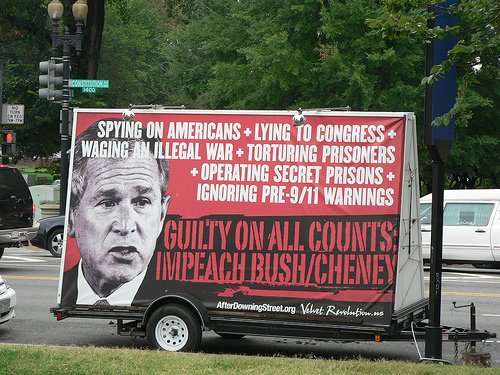 The President Posted at Flickr.com by Geff Rossi .

CIA director Michael Hayden has admitted to Congress that the agency used the technique to get information from three top al-Qaeda operatives, including Khalid Sheikh Mohammed, the suspected mastermind of the September 11, 2001 terrorist attacks who was captured in Pakistan in 2003.

Congress previously banned waterboarding and other harsh tactics, but the Bush administration said the law did not apply to intelligence agencies.

The top US law enforcement official, Attorney General Michael Mukasey, has refused to tell the Senate whether he believed waterboarding was legal or not.

Lawmakers based the content of the bill on the contents of the US Army’s handbook for interrogation techniques which expressly prohibits mock drownings and other use of force. Bush approved techniques other than those allowed in the Army Field Manual in an executive order last July.

Bush said the CIA programme to question terrorist leaders and operatives had produced “critical intelligence that has helped us prevent a number of attacks.”

He cited the foiling of several attacks, including plots to attack a US Marine camp in Djibouti and the US consulate in Karachi, and plans to crash passenger planes into Library Tower in Los Angeles and Heathrow Airport or buildings in downtown London.

“Were it not for this programme, our intelligence community believes that al-Qaeda and its allies would have succeeded in launching another attack against the American homeland,” Bush said.

The rights group Human Rights Watch said Bush had defied a majority of Congress “to allow the use of interrogation techniques that any reasonable observer would call torture.”

“President Bush will go down in history as the torture president,” said Jennifer Daskal, senior counsel at Human Rights Watch, in a statement.

Whether the CIA is engaging in torture became a hot topic in Washington after the secret service admitted to destroying video evidence of its harsh interrogation tactics.

The CIA claims to have stopped using waterboarding, which it views as completely legal, in 2003.

(Listed if other than Religion News Blog)
DPA, via EarthTimes.org, Germany
Mar. 8, 2008
www.earthtimes.