You are here: Home | Witchcraft | Scotland: Convicted witches will not be pardoned

Pertshire’s witches were denied a posthumous pardon after MSPs rejected a petition made by a man looking for justice for those convicted under witchcraft laws.

The hunt for supposed witches — whose alleged crimes were sometimes no more heinous than being near when someone got sick — took the lives of thousands of men and women across Scotland over centuries. 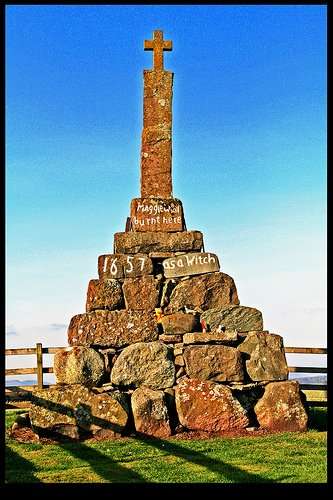 Maggie Wall is the only witch in Scotland with a dedicated memorial, although there are no records to show that a trial or execution ever took place.

But Ewan Irvine, acting on behalf of Full Moon Investigations, asked Holyrood to back his efforts to have all persons convicted of crimes under witchcraft legislation pardoned. However, the petitions committee unanimously knocked back the request, with one MSP stating that they had “better things to talk about.”

SNP member Nigel Don said: “It’s an interesting lesson in history, but it has no purpose whatsoever and I would like to close it now.”

The last woman to be convicted was Perthshire woman Helen Duncan, who spent nine months in Holloway Prison after being found guilty at a trial in 1944.

She had told a seance details of a warship that had been had sunk… before it had been officially announced by the British forces.

A total of 69 people signed the petition, and Green MSP Robin Harper backed calls to look into the issue further.

Among the witches reported to have been executed in the Big County are:

Christian Stewart: Originally from Perth and was considered a “prominent witch” in the late 16th century, before she was strangled and burned to death after being convicted of murder by spell.

The only evidence was that she took a black cloth from a friend (although there was no proof that the cloth ended up in the home of the victim). She was deemed guilty and suffered death at the hands of the law.

Maggie Wall: Burnt as a witch in 1657 on the outskirts of Dunning.

Maggie is the only witch in Scotland with a dedicated memorial, although there are no records to show that a trial or execution ever took place.

Janet Irwing: A “notorious” witch, who was killed in 1610 by fire following the death of a local family by poison.

Janet Irwing is thought to have worked with Robert Erskine (below) to concoct the poison using witchcraft.

Kate McNiven: Kate McNiven, the Witch of Monzie, was nurse to the Graeme family of Inchbrakie. In 1715 she was burned at the stake, and is thought to be one of the last women to be executed as a witch in Scotland.

The dying Kate’s prophecies, curses and blessings are reported to have been fulfilled in the families and fortunes of those who witnessed her end. There is even a cave named after the Witch of Monzie.

Robert Erskine: Visited Janet Irwing, and together they brewed up a poison that killed two people. He was beheaded in Edinburgh after being found guilty of witchcraft in 1613.

(Listed if other than Religion News Blog, or if not shown above)
Katy Gordon, icPerthshire, Mar. 7, 2008, http://icperthshire.icnetwork.co.uk