You are here: Home | Dutch government could ban anti-Islam film

The Dutch government was today examining the legality of banning a film attacking Islam amid fears that it would fan sentiment against the Netherlands in Muslim countries.

The Telegraaf newspaper reported that the coalition government was divided on the film, with the Christian Democrats leaning towards a ban but Labour favouring freedom of expression and calling on Muslim countries to prevent violence against the Netherlands.

Our View
A monument in Amsterdam commemorating those who were killed by Nazis in WWII includes the words of Dutch poet, H. M. van Randwijk: “Een volk dat voor tirannen zwicht, zal meer dan lijf en goed verliezen… Dan dooft het licht.”
English translation: ” A People that bows to tyrants will lose more than life and belongings… Then, the light is extinquished.”
Religion News Blog is published in the Netherlands — a country known for its defense of human rights, including freedom of speech.
The publishers of Religion New Blog support the right to freedom of speech. We deplore the spineless attitude displayed by Premier Balkenende and other government officials — most of them self-proclaimed Christians — who prefer to have free speech silenced by Islamic extremists over the risk of pointing out the violent nature of Islam as described in the Koran and as seen throughout the world.

The 15-minute film, called Fitna – an Arabic term used in the Qur’an and sometimes translated as “strife” – was made by Geert Wilders, a rightwing politician who leads the nine-member PVV (Freedom) party.

Wilders has argued that there is no such thing as moderate Islam, and has called for a ban of the Qur’an, which he compares to Hitler’s Mein Kampf.

“The core of the problem is fascistic Islam, the sick ideology of Allah and Muhammad as it is set out in the Islamic Mein Kampf: the Koran,” he wrote in a comment piece for the Volksrant newspaper last year.

Jaap de Hoop Scheffer, the Nato secretary general, has expressed concern about the safety of Nato troops after protests against the film in Afghanistan.

“If the [troops] find themselves in the line of fire because of the film, then I am worried about it and I am expressing that concern,” he said in a television interview.

Yesterday, around 1,000 Afghans protested against the republication of a cartoon of the prophet Muhammad in Danish newspapers and Wilders’ plan to air the film.

The protesters, mostly religious clerics in the northern Afghan city of Mazar-i-Sharif, demanded the withdrawal of Danish and Dutch troops from Afghanistan.

The Dutch prime minister, Jan Peter Balkenende, warned last week that the Netherlands risked economic sanctions and attacks against its troops because of the film. He stopped short, however, of saying that it should not be broadcast.

In 2006, demonstrations and rioting broke out in many Muslim countries after Danish cartoons, one showing the prophet with a turban resembling a bomb, appeared in a Danish newspaper. At least 50 people were killed and three Danish embassies attacked.

Balkenende said the Dutch government did not share Wilders’ views, adding that the cabinet was obliged to point out the risks of transmitting the film. 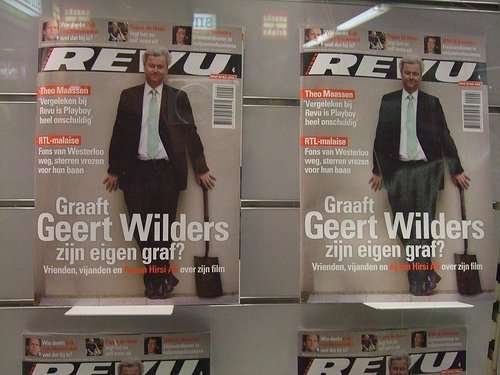 Dutch weekly asks, “Is Geert Wilders digging his own grave?”
Posted at Flickr.com by comicbase

Wilders – a target of death threats on Islamist websites – said he had completed the film and was in negotiations with TV stations for its broadcast either this month or in April.

The politician, who has gained support in recent opinion polls, has warned of a “tsunami of Islamisation” in a country that is home to nearly 1 million Muslims.

In 2004, a young Dutch man of Moroccan parentage stabbed and shot the controversial film-maker Theo Van Gogh, a distant relative of the artist.

The attacker said the killing was in response to a film about Islam and domestic violence that Van Gogh had made with the Somalian-born activist Ayaan Hirsi Ali, then an MP, which showed images of naked veiled women with lines from the Koran projected over them.

From her self-imposed exile in Washington, Hirsi Ali criticised the new film as “provocation”.

She called on the major Dutch political parties to restart the debate on immigration that has split Dutch society in recent years rather than leaving the field to extremists.

(Listed if other than Religion News Blog, or if not shown above)
Mark Tran and agencies, The |Guardian, Mar. 3, 2008, http://www.guardian.co.uk