You are here: Home | A taste of life with the Rainbow Family

OCALA — They pull up in their old cars and new SUVs, beat-up vans and hitched rides, then park along a path and pitch a tent.

Regardless — time stands still at a Rainbow Family gathering in Ocala National Forest. Yes, days come and go as the sun rises and sets. And sure, time passes with the daily calls from family kitchens for breakfast, for midday meals, for nightly handouts while gathering around the drums at Main Circle. 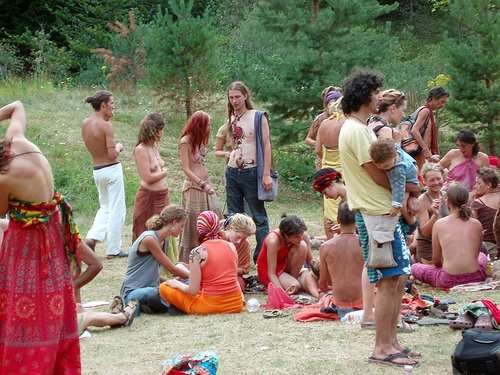 Rainbow Gathering Posted to Flickr.com by MOKU Since2007


But there is no TV reminding you that a half hour of your life has passed, no radio promising a block of music before it drones on into commercials, no clocks or cell phones to display the date and time with fervent accuracy.

Only you and the time you get up, the trek you make, the random exchanges with new friends and the sleepiness that will eventually come, at some hour into the darkness.

I had been fearful and nervous as we pulled into Ocala, wondering exactly which mile marker would lead us to the family gathering. So many media reports had told tales of an assault — an unexpected result of a gathering that meets every year across the nation and world to pray for peace and practice communal living.

We spot a group of young women sitting outside of a convenience store munching on food. The sisters tell us the way, warn of “aggroheads” at the entrance, or aggressors, and the “street kids” at camp, or homeless young.

This doesn’t help my fears.

We spot mile marker 29 and pull off onto the road behind a trio of men hauling trees and wood in a big, gray truck. They pay no attention until we turn right onto the dirt path leading to the gathering. Suddenly, there is an understanding, an immediate shoe-string of connection tied from our hearts to theirs. They turn. We flip peace signs and shout hellos.

Welcome Home, the man with black dreads mouths. Such a simple greeting helps my fears quickly dissolve. We had arrived.

The Rainbow Family is the largest non-organization of non-members making homes out of forests across the nation and world to pray for peace and love. Officials say more than 500 gathered in Ocala this year at a little slice of the forest called “Syracuse Island.” That’s 500 “Welcome Homes” called to entering cars and trucks.

The Marion County Sheriff’s Office released a Feb. 18 report of a victim being hit in the back of the head at the gathering, which begins in mid-February but started for some as early as November. The only attack I encounter is from a dirty, young, decked out head to toe in tie-dye family member named Run Away. Jovially shoveling fistfuls of dirt down my back, he deems me “way too clean.”

It’s like Kimberly “Mama Turtle” Reyes says: There are a lot of misconceptions of the Rainbow, but there’s only one requirement for being welcomed into the family.

You’ve got to have a belly button.

“Truth is it’s a really quick exercise on how to become conscious, how to be nonviolent, how to live on the land, and how to look each other in the eyes and not be afraid,” she says, “and stay in love.”

The moon is begging howls on this night, all lit up in its blue-black blanket and casting long shadows behind the forest pines. Past the oldest potato soup on record at the Green and Purple Kitchen is Thatch Hut Theater.

“Gypsy” Joe Hocking has taken the stage among the neon pink, blue and green bracelets encircling the campfire. He plays old jazz, bluegrass, some of Johnny Cash’s finest.

The 25-year-old from Massachusetts likes the sustainability in the woods, but is tired of people who say they don’t buy into the system and smoke cigarettes, supporting corporations.

Others point out hypocrisies, too. A man who only uses the name Olive Owl walks away from the Council, an impromptu gathering to discuss issues of concern or hopes for change. He wants to change the us and them mentality of some of his fellow family: us vs. the outside world, us vs. law enforcement, us vs. the alcohol-allowed, sometimes aggressive “A-Camp” guarding the entrance to the gathering.

A lot of people in the family start out feeling separated, says Robert “Flute Man” Barnes, Nashville. He went out looking for a way of life and found the Rainbow Family.

“The family gave me hope. I found I was worthy of being alive,” Barnes says over kettle corn popping at Iris Kitchen. “There’s a spiritual essence about us that goes beyond our personal life.”

That spirituality can be shared many ways. It’s in the random pocket trades of knick-knacks and beads, it’s in the hellos from every passerby. It’s at the drum circle, where hippie chicks in skirts and bikini tops dance; where no one leads the songs tonight; where some are high on drugs and others are high on life.

Chaos ensued early into the gathering this month when the U.S. Forest Service asked the Rainbow Family to leave their first camp, Duck Pond, because of an overload of damage from ATV drivers, said some of the family members and Forest Service Spokeswoman Heather Callahan.

But some things never change. You lend a brother a spare tent, he points you to the Grateful Dread Kitchen where the veggie burgers are hot off the grill. You throw some organic dried fruit into homemade banana bread, and the next kitchen offers you some rice pudding.

There’s no requirement of giving to get. But that’s what you do in family. Share a hug, food or laughter like it’s your favorite family holiday.

Rain and winds hit hard on the tops of tents at night. There is no Weather Channel here to tell us whether they are tornado-force or simply loud and never-ending throughout the dark forest.

Next day, the clouds break about 10 a.m. and the Florida sun shines. I wander from one camp to the next, kitchen to kitchen, basking in the individuality and togetherness that these woods-bound children and adults call “family.”

At the Grateful Dread Kitchen, William “Willie” Roberts welcomes the rednecks, the road dogs, the vegans, the old granola hippies, and everybody cooks what they eat. They’re making lasagna and chocolate-wheat pancakes tonight; they’re proud to be the last camp on the trail so everyone that’s coming is coming to see them.

Bellies fill and some who came simply for the weekend, like Skye “Captain Cupcake” Campbell and his son Lotus will head back to “Babylon” come Monday for school and work.

But as they have done for 13 years in Ocala, some of the family will stay on. They’ll wake up tomorrow, spread some love, and relish a family that shares.

(Listed if other than Religion News Blog, or if not shown above)
Sara Kiesler, Daytona Beach News-Journal, Mar. 3, 2008, http://www.news-journalonline.com