• The Virgin Mary is in a tree in San Antonio, Texas
• An alleged image of Jesus (in the Shroud of Turin) is in Langley, B.C., Canada
• The Pope will be visiting the White House (in April). 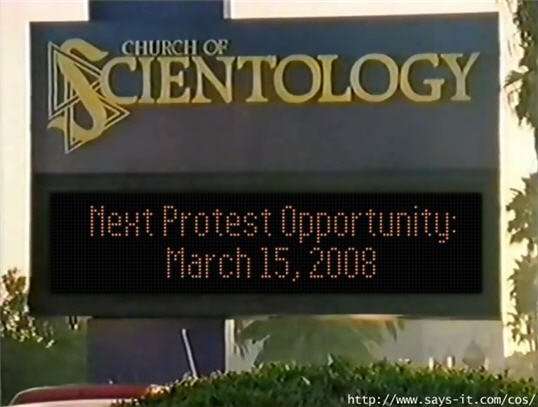 More information about the next international day of protests against Scientology can be found at Enturbulation.org
Scientology Sign Creator
The above sign is not real. It was created with the Scientology Sign Generator. Have fun. Free, no less (and without strings attached) — not something you can say about Scientology.

Religion News Blog normally focuses on serious religion-related news — at the expense of items like these:
China bans ghosts from the net

China has added ghosts, monsters and other things that go bump in the night to its list of banned video and audio content in an intensified crackdown ahead of the Beijing Olympics.
– Source

A Buddhist scholar who stole 61 statues from places of worship in and around Tokyo over the past three years because he felt they were “lonely,” has been arrested, police said.

Zenpo Suzuki, 46, unemployed, has five degrees – at least one of them in a postgraduate course — in various types of Buddhism studies. He claims to be able to communicate with the statues.

“If I talk to them, they answer me,” police quoted him as saying. “If they tell me they’re cold, I give them clothes to wear.”

Police said that Suzuki has stolen 61 statues with a combined value of around 10 million yen from temples and churches in Tokyo, and the surrounding prefectures.
– Source

In August, Walker broke into Doerun First Methodist through a window and accessed pornographic websites on the pastor’s computer, court documents said. In addition, Walker printed out images on the church printer and took them with him when he left, records said.
– Source

A Florida pastor has a new challenge for his parishioners. It involves sex – a subject that may be taboo in many congregations.

Single men and women can’t have sex for 30 days, and married couples are urged to have it every day.

“If you look at studies, studies say in 30 days you can develop a habit,” said Pastor Paul Wirth.

It definitely caught wives in the church by surprise.
– Source

A gated community in the evangelical world
D. Michael Lindsay is a member of the sociology faculty at Rice University and the author of Faith in the Halls of Power: How Evangelicals Joined the American Elite.
Lindsay has noted a trend: Many of the nation’s most powerful believers — presidents, CEOs, entertainers and athletes — won’t be found in the pews on Sundays, thus creating a growing gap between them and ‘the people.’ It’s a trend that is having a profound effect on this faith movement.

President Bush is Public Evangelical No. 1. His presidency is the capstone of evangelicals’ 30-year rise from the margins of society to the halls of power. But while the president has gone to great lengths to testify publicly to his faith, he often doesn’t do the one thing that defines most evangelicals — go to church. He attends chapel at Camp David and other special services, but the president rarely can be found in a congregation on Sunday morning. (In contrast, Presidents Carter and Clinton both attended services in Washington during their tenures.)

Surprised? When most of us think of devout evangelicals, we think of people who attend church regularly and are active in their local congregations. Yet many of the most prominent evangelicals do neither. They regularly attend Bible studies and religious gatherings, including last week’s National Prayer Breakfast in Washington, but many can’t be found in the pews on Sunday.

I spent the past five years interviewing some of the country’s top leaders — two U.S. presidents (George H.W. Bush and Carter), 100 CEOs and senior business executives, Hollywood icons, celebrated artists and world-class athletes. All were chosen because of their widely known faith. Yet I was shocked to find that more than half — 60% — had low levels of commitment to their denominations and congregations. Some were members in name only; others had actively disengaged from church life.
[…]

This trend is especially problematic within the evangelical world.
[…]

Community is a virtue for most religious traditions, but evangelicals have excelled at it. Declining church commitment among these leaders, therefore, is ripping at the very fabric that has distinguished American evangelicalism.

In an effort to evangelize among the nation’s elite, evangelicals have launched hundreds of invitation-only programs and organizations. Business leaders in Manhattan conduct Bible studies that meet in private clubs. Fellowship groups in Washington are reserved for diplomats and members of Congress. The CEO Forum, an invitation-only group for CEOs of large corporations, has been extremely important to the religious formation of many business executives. And, ironically, meetings designed to spur Christian philanthropy are held at fancy hotels and resorts. Indeed, the evangelical advance into the nation’s higher circles has entailed an extension of, instead of a departure from, the privileged and powerful worlds these leaders regularly inhabit. Yet how does an exclusive religious fellowship square with Christian teaching?

Organized religion is perhaps the one factor that could motivate people to bridge the gap between rich and poor, especially now as more of the faithful move into the halls of power. To turn the tide, clergy around the country must engage and draw in these leaders. Otherwise, affluent believers will continue to leave their congregations — and their fellow believers — behind in their ascent, creating a gated community of the soul.
– Source

WASHINGTON – He walked on water, he turned water to wine, and now he wants to be your candidate for president. That’s right, it’s Jesus, ready to lead the free world after President Bush leaves the White House next year. There’s only one hitch: he doesn’t have a platform. Or, for that matter, a running mate.

Jesus’ would-be political goals are up for a vote on a new Web site launched this month, www.JesusIn2008.com – a sort of nominating convention. The site invites participants to academically infer his stances on modern politics and choose a contemporary running mate, using the results as a voting guide in November. So far, only California Attorney General Jerry Brown has been floated as a possible V.P., and delegates are parsing Jesus’ positions on health care (he doesn’t trust HMOs), the environment (he’d be pro-conservation) and church-state separation (“Does Jesus have to recuse himself on this one?” one person asked).

“I’m probably not alone in feeling that somehow we are not getting the best possible candidates for president or the best possible process,” said Stephen Heffner, the site’s creator. A former newspaper reporter and a nonpracticing Catholic, Heffner thinks that Jesus is the kind of revolutionary that this country needs.

“My sense is that if Jesus were here, he would do the right thing, without needing a political strategist giving him what he thinks people want to hear,” he said. Even though it’s about Jesus, the site attempts to be nonreligious. If Jesus were to use miracles to solve the energy crisis or fund Social Security, strategic debate would be pointless. The Jesus running in 2008 is not divine, Heffner said, but rather “Jesus the man, the revolutionary individual who comes to us through history as a model for ethical and moral human behavior.”
– Source

What if Jesus were President? We think he’d be the opposite of George W. Bush. He wouldn’t lie. He wouldn’t support torture. He wouldn’t be a warmonger. He would actually care about human rights, about the poor, the sick, the eldery… He wouldn’t merely talk the talk, but would actually walk the walk.
And he most likely tell ‘Evangelicals’ to either give up that name or to actually start living up to it — what with the name deriving from the Greek word that means Good News, a reference to Christianity’s salvation message.

The Super Bowl Spotlight Shines on a Changed Man

WAYNE, N.J. — The walls of the jail cell were built from stone, providing the perfect place for David Tyree to hit rock bottom. Arrested for drug possession after the police found half a pound of marijuana in his car, caged between stone walls and steel bars, Tyree covered his face with his hands.

Those hands, with awkwardly bent fingers and mangled knuckles, grabbed national attention years later. During the Giants’ improbable Super Bowl victory over the undefeated Patriots, Tyree caught a desperation pass on the winning drive by pinning the ball against his helmet.

The catch introduced the 28-year-old Tyree to the world. He made the cover of Sports Illustrated and flew last week to Los Angeles to appear on national talk shows.

“What looked to be the lowest point in my life ended up being the greatest thing that ever happened to me,” Tyree, speaking of his arrest in 2004, said Saturday morning while sitting at his kitchen table.

From special-teams demon to Super Bowl deity. From moonlighting drug dealer to born-again Christian. From a child who drank alcohol and smoked marijuana with his family to a sober father and husband who started his own nonprofit organization.

This is Tyree’s version of his transformation.