COPENHAGEN, Denmark – Danish newspapers reprinted cartoons of the prophet Mohammed in a gesture of solidarity Wednesday after police revealed a plot to kill the creator of the caricature that sparked deadly riots in the Muslim world. 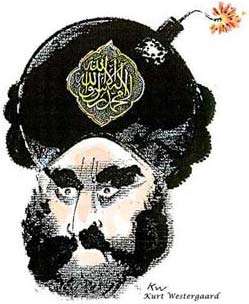 Danish Muslims said they would seek to avoid a repeat of the violence two years ago – but with a right wing Dutch lawmaker planning to air a movie that condemns Islam as fascist, Europe pondered the possibility of a new cycle of turmoil.

“I just don’t want go through this again,” said Mohammed Shafiq of the Ramadhan Foundation, a Muslim educational group in London. Shafiq said he has written a protest letter to the Danish ambassador in London.

Other Muslim groups echoed his sentiments, saying they believed the Danish papers were seeking unnecessarily to rekindle the fiery debate over free speech and Islam that engulfed Europe in 2006.

More than a dozen papers in Denmark reprinted what was arguably the most controversial of the 12 cartoons that enraged Muslims in early 2006 when they appeared in Western newspapers.

The drawing, by newspaper cartoonist Kurt Westergaard, depicts Islam’s prophet wearing a turban shaped like a bomb with a lit fuse.

The papers said they wanted to show their firm commitment to freedom of speech after Tuesday’s arrest in western Denmark of three people accused of plotting to kill Westergaard.

Islamic law generally opposes any depiction of the prophet for fear it could lead to idolatry.