You are here: Home | Dutch Cabinet says it wants to ban burqas in schools and government offices

THE HAGUE, Netherlands: The Dutch Cabinet said Friday it wants to ban burqas from all schools and prevent government employees wearing the head-to-toe Islamic robes, but said it was impossible to outlaw them altogether.

The Cabinet said it would send a proposal to lawmakers within a few months on banning burqas in school and said it would push government offices to forbid burqas in their staff dress regulations. 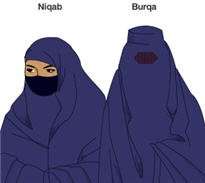 “I value being able to look somebody in the eye,” Prime Minister Jan Peter Balkenende said. “I find it unpleasant.”

The move is largely symbolic, as only about 150 women are believed to wear burqas in this country of 16 million people. But it is another sign of the waning of Dutch tolerance as the nation seeks to better assimilate its Muslim population of about 840,000.

Legal experts have told the government that a total ban would be unconstitutional and breach international agreements. But the government says local authorities and public transport operators already have the power to ban people wearing the robes in the interests of security.

The government has been under pressure from right wing parties to totally ban burqas. Friday’s announcement is unlikely to satisfy those calls.

Balkenende’s last administration — which included the right-leaning Liberal Party that is now in opposition — said in 2006 it wanted an all-out ban. But it was voted out of office before it could introduce legislation.

Interior Minister Guusje ter Horst said the Cabinet concluded there was no need to legislate a burqa ban. “Many organizations already have tools with which they can prohibit the wearing of a burqa.”

Lawmaker Geert Wilders, who has warned the Netherlands is being swamped by “a tsunami of Islamization,” has called for a total ban.

“It’s very disappointing that the political correctness of this government makes them a bit cowardly, not to act on what Parliament and the public asks,” he told AP Television News. “It’s bad for security, it’s bad for the emancipation of Muslim women. They will not integrate walking around like a penguin in the Dutch streets.”

Balkenende said government ministers would meet municipal and transport leaders to discuss how to deal with women in burqas.

However, Mobis, an umbrella organization for public transport companies, said in a letter to ministers that a ban on buses, trains and trams is unnecessary and unenforceable.

“Face-covering clothing forms neither a threat to public order nor does it increase the risk of people traveling without a ticket,” the group’s chairman Maarten van Eeghen wrote in a letter to the interior and justice ministers.

“We think that schools are part of the educational process and that students learn that you have to be able to look each other in the face,” he said.

Famile Fatma Arslan, a Muslim lawyer who wears a head scarf in court, said she didn’t see the need for the moves given the small number of women who wear burqas.

“I understand that it is a signal from the Dutch government to the Muslim community that that is the limit … that the burqa is not accepted here in the Netherlands,” she said.

(Listed if other than Religion News Blog, or if not shown above)
, AP, via the International Herald Tribune, Feb. 8, 2008, http://www.iht.com