My daughter the human pet
Recently a Goth who describes herself as a ‘human pet’ (and acts like it: her fiance leads her around on a leash) was not allowed to board a bus. We’re not making this up. 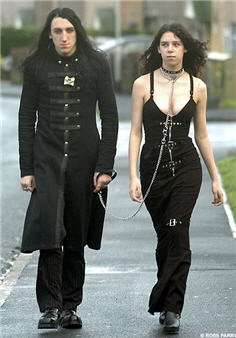 Dani Graves and girlfriend Tasha Maltby were allegedly barred from a bus
© Copyright Ross Parry
The girl’s mother is now quoted as saying, ‘I realise it’s a mum’s worst nightmare, and, I was shocked when I saw her on a dog lead. But…’

Becka added: “I admit being a human pet might not be what I would choose to do.

“But Tash is old enough to know her own mind and I would encourage that. And at least she is not an alcopop-swigging hoodie who wants to hang around on street-corners causing trouble.”
[…]

Goth Tasha sparked a wave of nationwide howling by proudly announcing she loved being the pet of 25-year-old Dani Graves.
[…]

Tasha and Dani are both devoted goths, a youth cult based on whips and chains, old horror movies and pasty-faced pop stars like The Damned and Siouxie and the Banshees.

The couple were barred from a bus near their home in Dewsbury, West Yorks, after the driver told them: “We don’t let freaks and dogs like you on.”
[…]

Becka reckons Tasha’s “artistic streak” made her into a goth. She said: “Any mum who has a teenage daughter will know that they follow trends.

“For many, that may mean high-heels and miniskirts and going out on the town.

“But Tasha has always been an individual.

“She loved the goth look and chose to follow it. She wasn’t forced into it by anyone.

“I must admit I never thought it would lead to the dog-collar and chain but I never worried that it was anything other than typical teenage behaviour.”

But Becka confessed she was not prepared for the day her daughter finally revealed her life as a dog.

She said: “Tasha and Dani came for a routine visit and the subject turned to housework.

“And as long as you don’t harm yourself or others, you make your own choices. Besides there are some advantages. She doesn’t have to do any housework or cooking and there are not many women lucky enough to be in that position.

“And to be honest, it was almost as much of a shock to learn a man was doing all the cleaning in their house.”

But Becka confessed she was nervous the first time she saw Tasha being led on a leash.

She recalled: “It took a little getting used to – but I did get used to it quickly because they seemed so happy together

“Of course, seeing my daughter on a dog-lead is not something I can honestly say I had ambitions for – but I knew it was a choice she was allowed to make in today’s society.
– More, if you can stand it.

Fans of Dallas Bishop T.D. Jakes now have another way to share his wisdom.
[…]

The pastor picked the messages himself, culling from years of sermons and books, spokesman Curtis Coat said.
[…]

One birthday card, for instance, urges the recipient to “celebrate who you are. You are the image of God.” Along with the message in each card is a Bible verse.

Mr. Jakes is pastor of the Potter’s House in Dallas, a congregation that has grown from 50 families to more than 30,000 members since the church opened in 1996.

His cards are part of a line geared to Black History Month, which is celebrated in February.
– More

While Jakes is enormously popular, Christians should note that Mr. Jakes denies the doctrine of the Trinity — one of the essential doctrines of the Christian faith.

If you already know Theroux, no introduction is necessary. If you don’t, check this BBC write-up:

Theroux joined the BBC in 1995 and embarked on a television journey which would see him travel to the corners of America in search of quirky characters.

The first series of Weird Weekends received critical acclaim as he found ever stranger folk to film.

Despite the controversial ideas of some of the people he tackles, more often than not they take him to their heart and open their homes to him.

Far-right extremists, swingers and female bodybuilders have also been put under the Theroux microscope.

Theroux is also the author of The Call of the Weird: Travels in American Subcultures

There is seemingly no end to the number of religious movements which claim to be ‘Christian’ in nature — or at the very least to be compatible with Christianity. One such movement is Christian Science, which — theologically, is a cult of Christianity. (Incidentally, for a look at the term ‘cult’ — including an explanation of the differences between theological and sociological definitions of the term — see CultFAQ.org). That said, they’ve got a new website:

The First Church of Christ, Scientist announced today the launch of http://www.christianscience.com/. At the heart of this new Web site is a collection of video clips in which people share their personal experiences in Christian Science.
– Details

Christian Science and Scientology are among the very few “secret” societies whose beliefs Mark Booth doesn’t promise to unveil in his new book, “The Secret History of the World: As Laid Down by the Secret Societies,” but in this respect, at least, they fit right in. Booth, an editor at a British publishing house, presents his book as an alternate history of the cosmos and humankind, with the early chapters relating the creation of the world and later chapters devoted to all of crankdom’s usual suspects: “Egyptian” hermeticism, Neo-Platonism, the Knights Templar, the pineal gland, alchemy, Rosicrucianism, Freemasonry — you name it. He maintains that his version of the creation narrative, distilled from all these sources, is “a teaching common to Mystery schools and secret societies from all over the world.”

To have written such a comprehensive synthesis of Western and Eastern esoteric mysticism would be a formidable accomplishment indeed — if there were any reason to think that Booth’s claim were true. For what it’s worth, the metaphysics can be summarized thus:

The material universe is an emanation of the cosmic mind, which began to “precipitate” (the central metaphor is of crystals forming in a solution) when the mind (i.e., God) first reflected on itself. The thought of God became more and more “dense,” turning to “gas, then liquid and finally solids.” Matter continued to pass through a series of stages of increasing density until it formed the Earth, living creatures and finally human beings. Humanity, in turn, continues to evolve toward the ultimate end of the entire process: the universe becoming fully aware of itself. Memorable early milestones in this saga include the stage at which the universe consisted of a “vast vegetable being” and the part where the “fish gods” came along to teach us all how to talk to plants.

From this you might conclude that “The Secret History of the World” is a truckload of drivel, and you would be right. It is a mess of a book, disjointed and rambling, rife with puzzling non sequiturs that are obviously meant to be suggestive or evocative but that more often read like the symptoms of an advanced case of Attention Deficit Disorder. The many illustrations culled from Western art (“Egyptian snake goddess with knives,” “Zarathustra with rolled scroll”) are largely undated and unsourced, as are most of the colorful but unenlightening anecdotes. We are informed that the 16th-century Swiss alchemist Paracelsus was “a strange, aggressive character” who “seems never to have grown a beard” — but Booth leaves out his contributions to the world’s store of knowledge. (He was the father of toxicology.)

Booth is forever intimating that he’s about to explain something important to the reader and then abruptly dropping the subject. He has all the smoke and cymbals of the Great and Terrible Oz, but can rarely muster even the fake disembodied head as a crescendo. He makes a promise, for example, in the caption to a reproduction of Leonardo da Vinci’s “The Last Supper” — “It has been suggested that this painting alludes to suppressed secret doctrines regarding the feminine role in Christianity. We shall see shortly that this is true, but not in the way proposed by ‘The Da Vinci Code‘” — that is never fulfilled; he never mentions the painting again.

Furthermore, much of the “information” Booth chooses to supply is either incorrect or, frankly, untrue.
– Get the full length review

• The Dredge Report
Yep, a Drudge Takeoff by Christian author, comedian, and (well read the list yourself) James Watkins. Bookmark his blog.

• The Crux
Excellent blog by Midwest Christian Outreach — a Christian ministry countering anti-Biblical influences, both outside and within the true Church.