• In Pictures: The Jesus Army 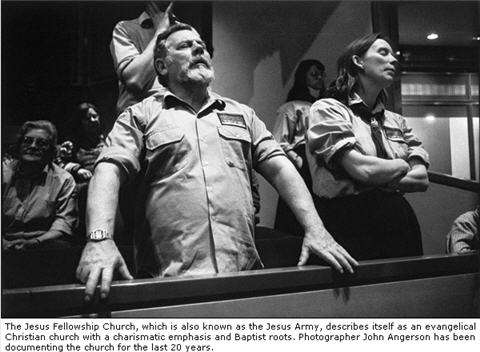 BBC Magazine has a picture essay on The Jesus Army — a controversial British group watched by cult experts.

The Jesus Army was founded in 1969 in Northamptonshire, England, and believers are expected to renounce all their possessions, live in communes and share all earnings.

The group was expelled by the Baptist Union and the Evangelical Alliance in 1986 because of is recruitment methods and isolationism.

People who feel lonely are more likely to believe in the supernatural, whether that is God, angels or miracles, a new study finds.
[…]

In their study, detailed in the February issue of the journal Psychological Science, [University of Chicago researcher Nicholas] Epley’s team tried to induce feelings of loneliness in people to see how it affected how they thought of pets and their belief in religious figures.

A Bible-oriented group’s proposal to offer a degree in science education has drawn opposition from some of the state’s leading physicians and scientists, including a Nobel laureate who warned that Texas is at risk of becoming “the laughingstock of the nation.”

Critics of the proposal by the Dallas-based Institute for Creation Research have peppered the state’s commissioner of higher education with e-mails in recent weeks. Dozens of the institute’s supporters, including some scientists and physicians, also have e-mailed Commissioner Raymund Paredes, in some cases apparently prompted by a plea from the institute’s chief executive.

Like cooks whipping up a recipe from scratch, a team of genetics researchers has artificially assembled all of the genes needed to make a simple bacterium, in hopes of creating a synthetic organism by the end of the year.

The team led by maverick scientist J. Craig Venter chose the smallest target possible by building the genome of Mycoplasma genitalium, one of the tiniest known species of bacteria. But they have much larger ambitions, such as understanding the most basic requirements for life and designing new bacterial life-forms capable of producing biofuels.

“If the experiments are successful, we could enter into a new design phase of biology,” Venter said Thursday during a press teleconference from Davos, Switzerland.

A sailor who admitted being a Satanist has been promoted to a job with the Ministry of Defence.

Yesterday, his mother revealed her son had been head-hunted for a job in Whitehall.

• Technical aspects of the DDoS attacks upon the Church of Scientology

Dr. Jose Nazario of Arbor Networks has been looking at the technical side of the distributed denial of service (DDoS) attacks upon domain registered to the Church of Scientology International. In general he finds that while there have been a lot of DDoS attacks, the early ones were mild. They were, however, stronger than the DDoS attacks upon various Estonian sites last spring. As a protective measure, the Church of Scientology has since moved its domain to a more protected space.

Prior to the move, Nazario found that on January 19, there were 488 DDoS events, all of which appear to come from one IP address, “indicating,” said Nazario, “that this is not a huge, broadly sourced attack (i.e. it may not have registered on other ISPs systems).” He also notes that the types of attacks he saw on Saturday were “common, garden-variety DDoS attacks.”
[…]

On January 21, the Church of Scientology moved its domain to Prolexic Technologies, a company that protects Web sites from DDoS attacks. Attacks against the site have increased, with a major assault on Thursday night at 6 p.m. EST.

A two-minute video clip of P.O.D. (a.k.a. PAYABLE ON DEATH) vocalist Sonny Sandoval explaining the meaning behind the title of the group’s upcoming album, “When Angels & Serpents Dance”, can be viewed [at left].

P.O.D. will release “When Angels & Serpents Dance” on April 8 via INO/Columbia Records.

Check out an audio preview at the band’s web site.

WASHINGTON — Catholic and evangelical social justice leaders on Thursday urged President Bush to use his upcoming State of the Union address to turn around what they called his faltering moral legacy.

Frequently referring to the state of American public policy as “shameful,” the representatives of five major religious organizations said Bush has sidestepped pressing religious concerns, despite his recurrent religious rhetoric.

Specifically, they said the White House has failed to deal with growing poverty at home and abroad, turned a blind eye to torture, ignored climate change, and neglected the human suffering from the war in Iraq.

“We have yet to fully sort out the legacy of an explicitly evangelical president, who sadly has had such a truncated vision of what a moral leadership looks like,” said the Rev. David Gushee, president of Evangelicals for Human Rights.

“I am hopeful that the evangelical community as a whole has been chastened by that and is open to reconsidering what we think a truly evangelical moral leadership would look like.”

Our view: When you talk the talk but don’t walk the walk people are right to doubt whether you’re a Christian [i.e. a follower of Jesus Christ] at all. See also this August, 2007, editorial: Religious Right got it terribly wrong in recommending Bush

“I believe in the redemptive death and resurrection of Jesus Christ.”

PINE BLUFF, Ark. (AP) — Mike Huckabee learned how to be a politician in church.

As pastor at Immanuel Baptist in Pine Bluff, he visited the home of every member. Years later, he could recall their names.

He learned how to raise money, even in struggling congregations.

And in a statewide fight over Baptist leadership, he confronted powerful opponents and won. He called it “some of the most intense hardball politics I have ever seen.”

As a Republican presidential candidate, Huckabee’s remarkable balancing act — firing up both Bible-believers and the less religious — can be traced to his style of preaching. On the pulpit, he delivered unwaveringly traditional sermons with wit instead of fury. The result was a broad appeal.

Republicans and Democrats must learn how to argue the questions of faith and morals on this war through the art of reason and bipartisanship.