You are here: Home | Frank Schaeffer | Author details path to evangelism and his journey out

Salisbury author Frank Schaeffer may feel like his dozen years on the evangelical speaking circuit were a waste of time, but they sure make for a good read.

Immense popularity in the international evangelical community allowed his father, Francis, to lecture throughout the United States in the 1970s and ’80s, while grooming his son to take over the family business. In the process, young Schaeffer rode in the private jet of Jerry Falwell, befriended the children of Jimmy Swaggart and Billy Graham, and spoke in front of thousands from Fargo to Las Vegas.

Then he saw a different kind of light.

“It’s like being raised in the mob; it’s the world that you know,” Schaeffer said. “Really, it’s like growing up in New Jersey and killing people seems normal. Until you get out of it and realize maybe this isn’t as normal as you thought.” 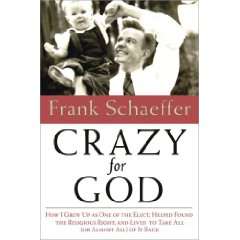 Schaeffer, 55, shares his life story in a new memoir, “Crazy for God: How I Grew Up as One of the Elect, Helped Found the Religious Right, and Lived to Take All (or Almost All) of It Back” (Carroll & Graf, 2007). He will speak about his book at Cornerstone Books in Salem, Mass., on Saturday afternoon.

Neither Schaeffer sought out fame and fortune in America’s evangelical community. Francis Schaeffer steered clear of the rigid movement for 20 years in Switzerland, only to later be propped up as one of its most vehement pro-life leaders. Frank Schaeffer set out for a career in the fine arts, only to give it up for the evangelical books, documentaries and lectures that came his way.

“My dad really understood and in one of his books, he said he was sorry he took me out of my studio and away from painting,” Schaeffer said. “My dad was a hero to these people, because he was one of the few evangelicals who could chew gum and speak at the same time. I mean, he was an intellectual, and they hoped it would rub off on them. It was clear to me that they hadn’t read his books, but latched onto him because he was pro-life. But they had no idea what else he believed in.”

Schaeffer’s father was a pastor at several small churches and later became a missionary. He moved to Switzerland in 1947, joined shortly by his three daughters and wife, Edith, who was from a well-educated missionary family herself.

After a disagreement within the Protestant missionary group, the church split and Francis Schaeffer formed his own ministry, preaching Calvinist fundamentalist Protestant values, in 1955.

“It was like living in a fish bowl,” Schaeffer recalled of his life in Switzerland. “My sister attended the University of Lausanne and she would bring friends home for the weekend. Gradually more and more young adults and college kids were living in our house and it really became a commune before such things existed.”

Born in 1952, Frank Schaeffer grew up in the Swiss landscape. With his parents focused on running the mission, he went without adult supervision more often than not. He might wander around the nearby village, hike in the Swiss Alps, ski in the local forests — whatever he wanted, whenever he wanted, he said.

At night, though, his mother always read aloud from a good book, an act Schaeffer repeated with his own three children. And he did sincerely believe in his parents’ fundamentalist beliefs.

“My parents were very eccentric and I was allowed to roam freely,” he said. “I didn’t go to school. I didn’t study. Nothing happened to me that could be considered normal. But they were very strict in some ways. I had absolute physical freedom combined with this religious life that was run like a Protestant monastery.”

Even as it was strict, that Protestant monastery was one of true acceptance — a characteristic Schaeffer found decisively different than the evangelicals he later met in America.

Schaeffer’s parents, for instance, never turned away when his “hippie princess,” Genie, became pregnant as teenagers, he said. The couple did marry a year after having the baby, and, more than 37 years later, have successfully raised three children together.

“We were in a commune with all kinds of people coming through,” Schaeffer said. “Someone might be pregnant or gay or a druggie, and it was OK. It was not an uptight, exclusive group. Our Christianity was welcoming and wide open. And to get out of that environment and to pal around with Jerry Falwell was just a shock.”

Hanging around with America’s evangelical leaders came early in Schaeffer’s life, but quite late in his father’s. Young Schaeffer started accompanying his father to lectures when he was around 15 or 16 years old. He gave his first lecture on Christ and art around 17 or 18 years old, and spent his 20s on the speaking circuit with his father.

Schaeffer found the religious leaders to be quite different in private than they were as their polished public personas. It’s an opinion he elaborates upon strongly in his book.

“In private, they ranged from unreconstructed bigot reactionaries like Jerry Falwell, to Dr. Dobson, the most power-hungry and ambitious person I have ever met, to Billy Graham, a very weird man indeed, who lived an oddly sheltered life in a celebrity/ministry cocoon, to Pat Robertson, who would have a hard time finding work in any job where hearing voices is not a requirement,” Schaeffer writes.

He continued to travel the evangelical circuit with his father throughout the 1970s and early ’80s, poised to inherit his father’s fame and fortune. But when he and his wife and children moved to Salisbury in 1980, he began to question his work in the evangelical movement.

When his father died in 1984, Schaeffer decided it was time to get out.

“My father’s dying just was the time to draw the line,” Schaeffer said. “I saw my future of being awarded an incredibly successful career, but it was like winning a prize you didn’t want.”

There were times when earning money was a struggle and Schaeffer questioned his decision. But these days, the successful writer says he is happy with his choice.

He recently started painting again and is working on a new book. Religiously, he is a member of the Annunciation Greek Orthodox Church in Newburyport.

“Nothing can concentrate the mind like being broke and knowing you’re three phone calls from being back in the saddle,” Schaeffer said. “But in a way, I never left religion. I just left the political movement.”