A Turkish lawyer is taking legal action against Inter Milan, the Italian football team, for wearing a strip with “Crusader-style” red crosses that he alleges is “offensive to Muslim sensibilities”.

Baris Kaska, a lawyer in Izmir who specialises in European law, said that he had lodged a complaint in a local court against Inter Milan, which last month played the Istanbul team Fenerbahce in a Champions League match at the San Siro stadium in Milan. The Inter players wore a new strip – a white shirt with a giant red cross on it – marking the club’s centenary. 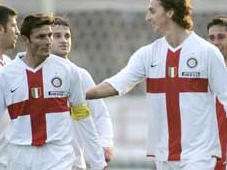 Inter Milan officials said they felt entitled to use their new uniform with ‘Crusader-style’ red crosses on it as displayed by Chilean midfielder Luis Antonio Jimenez Garces in last month’s match, claiming the outfit marks the club’s centenary and is the symbol of the city of Milan.

Mr Kaska said he was not only seeking damages but was also appealing to Uefa to annul the match, which Inter won 3-0. “That cross only brings one thing to mind – the symbol of the Templar Knights,” he said. “It made me think immediately of the bloody days of the past. While I was watching the game I felt profound grief in my soul.” Mr Kaska told the Spanish newspaper La Vanguardia that the cross symbolised “Western racist superiority over Islam”.

He said that Inter had “manifested in the most explicit manner the superiority of one religion over another”. He said the court had contacted both Uefa and Fifa to convey his demand that Inter should be “heavily fined for displaying an offensive symbol”. “How could Uefa allow this?”demanded the Turkish paper Radikal.

Inter Milan officials said that they were “astounded”. They said that in the first match between the two teams in September at Istanbul – which Fenerbahce won 1-0 – Inter had deliberately refrained from wearing the strip with the red cross but had felt entitled to use it on its home ground.

Inter officials also pointed out that a red cross on a white background is the symbol of the city of Milan. Many Italian football clubs incorporated the cross on their shirts, including Inter, founded in Milan in 1908. “The red cross has become an international political football,” Corriere della Sera commented.

Uefa’s mission is to “promote the principles of unity and solidarity” in Europe through football, “without discrimination on grounds of gender, religion or race.” However, Inter officials said Uefa had approved the new Inter strip at the start of the season, and the Turkish club had also accepted it before last month’s game.

Muslims behavior that is offensive to civilized people:

Europe is not Islamic, and Europe should not sacrifice its culture and values, including freedom of speech, to a people who – in the name of Islam – use any and every opportunity to stage violent protests, issue death threaths, destroy property, murder, and commit other acts of terrorism.

La Repubblica said it was unclear whether Mr Kaska was “more wounded by the supposed offence or by the goals Inter scored”. Fenerbahce, one of Turkey’s top teams and the main rival in Istanbul of Galatasaray, was also founded 100 years ago. Its players wear a yellow-blue strip and are known as “The Yellow Canaries”.

The row comes at a sensitive moment in Turkey’s ambitions to join the European Union. This week France won a symbolic victory at a meeting of EU Foreign Ministers when it prevented the EU using the word “accession” or “membership” in connection with Turkey, which is a secular state but has a majority Muslim population and a government led by Islamist politicians.

Ankara opened negotiations for EU membership two years ago, but Nicolas Sarkozy, the French President, has repeatedly said that Turkey has no place in Europe and should be offered instead a “privileged partnership”.

David Miliband, the Foreign Secretary, said: “We think it’s important that the European Union fulfil its responsibilities towards Turkey, but also that Turkey continues the reform process that is an important part of its passage to the European Union.”

The EU statement welcomed the strengthening of democracy in Turkey but said “significant further efforts are needed in other areas such as judicial reform, the fight against corruption, minority rights and strengthening of cultural rights, women’s rights, children’s rights, trade union rights and civilian control of the military”.

(Listed if other than Religion News Blog, or if not shown above)
Richard Owen in Rome, The Times, Dec. 11, 2007, http://www.timesonline.co.uk