You are here: Home | Mixed reaction to Warren Jeffs tapes

However, they are not generating quite the reaction that ex-FLDS members and others pursuing the polygamist sect leader had expected.

“A lot of people just refuse to believe it no matter what,” said Sam Brower, a private investigator working for lawyers suing Jeffs and the FLDS Church. “Others, they look at it and feel betrayed.”

Brower said he has handed out about a half-dozen copies of the DVD of the jailhouse conversation in which Jeffs renounced his title as prophet of the FLDS faith. Some of the recipients are people still in the church, he said.

Many believe the tapes are a lie, said Isaac Wyler, an ex-FLDS member who lives in Colorado City.

“They’re claiming everything from him being drugged to the actual tape itself being manipulated,” he said.

In January, Jeffs met with his brother, Nephi, during a visit at the Purgatory Jail. It was videotaped by jail officials, a standard procedure. On the tape, Jeffs tells his brother that he is not the prophet.

“The Lord told me to say, and I yearn for everyone’s forgiveness for my aspiring and selfish way of life, in deceiving the elect, breaking the new and everlasting covenant and being the most wicked man on the face of the Earth in this last dispensation,” Jeffs said on the tape.

See Also
A prophet no more? Warren Jeffs called himself a sinner in jailhouse conversation
Mystery note: Warren Jeffs may have abdicated polygamist prophet role
A year in jail makes Warren Jeffs no less loved
Polygamist leader Warren Jeffs still a force from jail
Has Warren Jeffs lost control over his polygamist FLDS?
Power shift for FLDS may be under way
Warren Jeffs May Retain His Grip Even From Jail
Research resources on the FLDS

Jeffs’ defense attorneys have said in recently unsealed court papers that the FLDS leader later recanted his renouncement, which was made at a time when he was severely depressed. Jeffs repeated the claim in numerous phone calls to followers, as recently as June, court documents said.

Jeffs is scheduled to be sentenced in St. George’s 5th District Court on Tuesday following his conviction on charges of rape as an accomplice, a first-degree felony. He faces up to life in prison for performing a marriage between a 14-year-old girl and her 19-year-old cousin.

In Arizona, Jeffs faces more charges related to child-bride marriages. His criminal defense attorney there argued against the release of the tapes and other sealed documents, saying they would affect the FLDS leader’s right to a fair trial.

“I believe release of these items could impact and potentially violate Mr. Jeffs’ right to due process as protected by the Arizona and United States Constitutions in his pending Arizona cases,” defense attorney Michael Piccarreta wrote in a letter filed in St. George’s 5th District Court, objecting to the release of the tapes and documents.

Regardless of whether the tapes are seen or not, some are noticing changes in the FLDS communities.

“People are letting light into their lives now,” Wyler said.

Around town, windows have had their blinds and drapes closed and paper taped over the windows to keep prying eyes out.

“That’s all coming down, except for the very most fanatical,” Wyler said.

Huge fences built around homes in the communities still remain, but Wyler said he has seen more children on the streets.

Wyler said another split may be coming in the FLDS Church, with some remaining loyal to Jeffs and others breaking away. 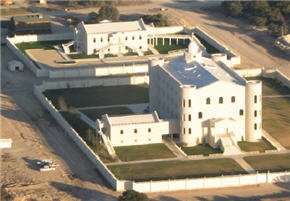 FLDS temple at the FLDS Ranch in Eldorado,Texas.
Photo from Eldorado FLDS

At the FLDS enclave near Eldorado, Texas, construction continues unabated on the “YFZ Ranch.”

“Much construction — one new house complete — two, three started — sewer and water completed for more construction by block,” JD Doyle, a local pilot who flies over the ranch and photographs its progress, said in a recent e-mail to the Deseret Morning News.

More warehouses have been built, and construction is starting near a dairy set up there. The YFZ Ranch is the site of the FLDS Church’s first-ever temple, and pictures show a gleaming white building set against the backdrop of the vast Texas prairie. “YFZ” stands for “Yearn for Zion,” after a song Jeffs wrote.

Recently, a church was built near the temple.

“The other church is now complete — reported that is normal services and temple is for special services,” Doyle wrote.

(Listed if other than Religion News Blog, or if not shown above)
Ben Winslow, Deseret Morning News, Nov. 17, 2007, http://deseretnews.com