You are here: Home | Miraculous response to Virgin Mary pebble

An auction for a pebble bearing an apparent image of the Virgin Mary has prompted a miraculous response with bids last night approaching $30,000.

Christchurch woman Lisa-Marie Corlet listed a 1cm-wide pebble with a picture resembling the Virgin Mary on it on TradeMe this week, with a buy now price of $50,000.

Yesterday, someone with a New Zealand email address bid $50,000 for it but it proved to be a prank. 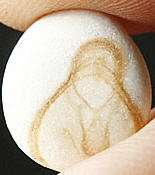 Corlet said the number of hits to her auction was “absolutely amazing”.

The 35-year-old said she was not religious but believed the stone had brought her good luck.

Earlier in the day, her astonishment at the offer of $50,000 for the tiny stone had quickly turned to anger when she realised the bid was a hoax.

“I couldn’t believe someone would do that. He emailed me and said he put in that fake bid because he thought what I was doing was wrong and against the religion.”

Corlet said although she could take legal action to make the bidder pay up, she was not considering it at this stage.

TradeMe business manager Mike O’Donnell said when the buyer was told his $50,000 bid was legally binding “we were met with a sharp intake of breath and then the line went very quiet”.

“We talked to Lisa-Marie about taking him to court but she told us she’d received an apology from the buyer and she just wanted to re-list it, so we helped her do to that and also refunded the success fee from the bid.”

The fake buyer was banned from TradeMe.

The new auction saw two further false bids, both quickly closed down by the site.

The auction closes next Wednesday.