You are here: Home | Religious Merchandising | Good luck finding jesus: He is sold out

Norma Venning was surprised to encounter Mary, Moses and Noah in the toy aisle of her local Wal-Mart on a recent morning, but there was no sign of Jesus – the son of God had already sold out.

“I didn’t even know it existed. I think it’s a wonderful idea,” the retired school worker said of Tales of Glory, a line of talking, Bible-based dolls on the shelf at the Wal-Mart off Battlefield Boulevard.

For the first time, the world’s largest retailer is stocking a full line of faith-based toys along with its usual cast – including a GI Joe Combat Squad action figure with a gun the size of his body and a 3-foot remote-control concept car dubbed Big Time Muscle. 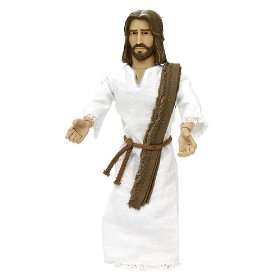 Wal-Mart is test-marketing the posable figures in 425 locations; two are in Chesapeake and one is in Virginia Beach.

Toys like the “Deluxe Aggression” and “Fury Unmatched” wrestling figures a couple aisles over are the kind that Jesus, with his pointable plastic index fingers, homespun tunic and velvet sandals, was put here to counter – or perhaps even to save.

Jesus’ maker, David Socha, said he created the biblical toys to give girls an alternative to dolls in G-strings and boys a source of amusement not modeled on “demons” and “spawns of Satan.”

“The Bible’s full of violence, but I don’t think violence is glorified in the Bible,” said Socha, CEO of California-based one2believe. “When I was growing up, I was always GI Joe. I was never the bad guy. Now, I think some kids are playing the bad guy. We’re trying to bring wholesomeness back.”

Josh Livingston, a spokesman for one2believe, said his firm manufactured more than 100,000 figures, and expects the hottest sellers, Jesus and Mary, to be sold out before Christmas. The dolls also are available online at Target.com (but not in Target stores) and at one2believe.com.

The Wal-Marts stocking the dolls are mostly in the Midwest and South, including 20 stores in Virginia. Each store is near a large number of churches or has a history of strong sales of faith-based products. The retailer is not selling the toys online, said Jami Arms, a Wal-Mart spokeswoman.

At the Wal-Mart off Battlefield Boulevard, faith-oriented merchandise included a Bible-themed coloring book, a “Read and Learn Bible” for children and books by Christian authors including Rick Warren. DVDs of “Evan Almighty,” a Hollywood comedy about a modern-day Noah, also were for sale.

In the toy department, the biblical dolls stood shoulder-to-shoulder between a Playschool “Busy Ball Choo Choo” and Fisher-Price toddler toys. Noah, Mary, Esther and Moses sold for $14.97, while Samson and Goliath, muscle-bulging toughs who don’t talk, were $19.97.

When Jesus is in stock, he sells for $14.97. “I am Jesus,” he says when you press a button on his back. “I am the son of God.” The talking dolls speak for nearly a minute, giving their biographies, then recite three Bible verses.

Dee Cyr, a toy sales clerk at the store, said customers had asked for faith-based toys for years. “This is the first time we’ve had a line like this.”

Aisha Fells, the store’s assistant manager, said about eight Jesus dolls had sold over three weeks – a rate she called brisk for so early in the Christmas sales season. 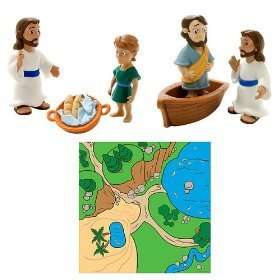 “They’re one of my top sellers.” Fells said she would restock but wasn’t sure how many Jesus dolls she’d end up ordering before Christmas.

The biblical toys, which include smaller-scale nonposable figures depicting the Nativity scene, Noah’s Ark animals and a pious-looking Daniel with eyes cast toward heaven, pleased Janet Taylor, a retired nurse from Portsmouth.

“I have a new grandbaby that’s going to be born Oct. 31 and I would gladly buy this for him,” she said of the toy line.

Venning, the retired school worker, said Tales of Glory figures could supplement the Christian education children get in Sunday school or at home.

“It’s better than buying them superheroes. It’s an opportunity for a Christian parent and Christian grandparents to not buy something that transforms into an ugly creature.”

She pressed a button on Mary’s back to hear the virgin speak – “I am Mary. I am the mother of Jesus” – and compared Moses’ face to the popular standard.

Sidebar: FAST FACTS
Jesus, a.k.a. The Son of God, from one2believe’s Tales of Glory line of dolls

Features: The dolls speak for about a minute, giving their biographies, then recite three Bible verses

What the Jesus doll says: “When it started to get late, I knew that the people must be hungry. I wanted to feed everyone, but I didn’t have any money. There was a young boy nearby with five loaves of bread and two fish. It wasn’t enough food to feed so many people. But I took the bread and fish, and I said a blessing over it. Then I handed out the food to all of the people…

“When all the people saw this miracle, they were very excited! But they did not know I was the Son of God, or that I was sent to save them.”

The New York Times News Service contributed to this story.

(Listed if other than Religion News Blog, or if not shown above)
Steven G. Vegh, The Virginian-Pilot, Oct. 23, 2007, http://hamptonroads.com/pilotonline/