Carolyn Jessop says a grizzled hell-raiser made her confront the cruelty she experienced as a plural wife – and convinced her she didn’t need an abusive husband to get to heaven.

Four years and two children later, Jessop finally found the courage to act on the ex-con’s counsel, staging a dramatic escape from the Fundamentalist Church of Jesus Christ of Latter Day Saints.

Jessop, 39, describes the life-altering conversation in a tell-all book about her experience in Utah’s most notorious polygamous sect. The book, Escape (Broadway Books, $24.95), debuts today nationwide. 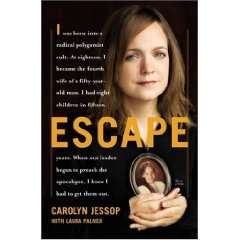 “It was really Carolyn who made me think we’ve got to do more, got to take the lead and provide a safe place for these women and victims to land so their basic needs are taken care of,” Shurtleff said.

Jessop’s depiction of life within the FLDS fold, based in the twin towns of Hildale, Utah, and Colorado City, Ariz., contains some surprises. There are pizza and beer parties with the prophet, she writes, a coffee klatch where women freely trade jokes and gossip, and family trips to Disneyland.

A college graduate, she was expected to work to provide for her children. She taught school, designed Web sites and even sold NuSkin cosmetics to elite women in the community.

But for Jessop, her life out of public view was a misery, and that is where she focuses her story.

“I feel like the public needs to realize that some of these polygamous relationships are held together based on cycles of abuse,” said Jessop, who now lives in West Jordan with seven of her eight children. “And the reason women stay in that kind of abuse is because they don’t believe they are worthy of anything better than that. You live your whole life in fear, tyranny and poverty.”

Jessop traces a polygamous heritage back six generations. She grew up playing games of “apocalypse,” mimicking the doomsday pronouncements fed to the FLDS faithful, and dodging beatings from an unstable mother who was often depressed. When Jessop was 10, her father received a second wife and life improved somewhat, she writes.

She was 18 when her father announced she was to be married. The groom: Merril Jessop, then 50 and an influential businessman.

At the time, Jessop believed her marriage had been arranged through divine inspiration sent to then-FLDS prophet Leroy Johnson. “For me to reject my marriage was to reject God’s will in my life,” she writes.

So she dutifully submitted, only to find herself in what she describes as a nightmarish relationship.

Jessop calls her former husband, who now oversees the sect’s YFZ Ranch in Eldorado, Texas, an ”egocentric bully” and ”narcissist” who dictated every aspect of his wives’ lives, enjoyed pitting them against one another and was emotionally abusive. Over the course of their 15-year marriage, he told Jessop a cold sore was the result of her “speaking lies” and blamed a son’s cancer on her “rebellion.”

Barbara, his favorite wife, ruled her sister wives and their 30-odd children by tantrum, fiat and even physical abuse. His daughters treated Jessop, their other mothers and siblings with a haughty disdain.

“There was a lot of fighting for power, dominance and control,” said Jessop.

In time, Merril added more wives and had a growing number of children.

Jessop learned that keeping her husband sexually satisfied earned her some influence and, for her children, safety within the family. When the opportunity came to move away, she took it.

In 1998, she went to Caliente, Nev., to manage one of her husband’s motels. It was here that Jessop met James, whom Jessop identified only by his first name. He kept rattlesnakes as pets and doled out sage advice about domestic violence.

Jessop found the Hot Springs Motel, where many FLDS weddings took place, a welcome respite from the extremist attitude that had taken root under prophet Rulon T. Jeffs and his son Warren.

Among the strange new edicts handed down: A ban on wearing red clothing since it was the color of the robe Jesus Christ would don upon his return to Earth.

“In our family we went through the closets and eliminated most of our red clothes,” Jessop writes. For less-well-to-do families it was a severe hardship, she said.

She also recounts the time FLDS faithful were told to get rid of their dogs after a little boy was mauled to death by his family’s pit bull. Some families, such as hers, found homes for their pets or placed them in pounds; others were rounded up and killed, she writes.

Jessop describes Warren Jeffs as a ”brutal man” who advised one wife to drink beer to calm a fussy baby and insisted another give birth at home, which Jessop says required a crude episiotomy performed with sewing scissors and dental floss.

Most frightening of all, Jessop said, was Warren Jeffs’ threat of ”blood atonement” – having one’s blood spilled to atone for sins – that he leveled at one of his father’s wayward wives.

In 2002, as Warren Jeffs succeeded his father and began making ever more apocalyptic predictions, Jessop was already plotting her escape.

Just before dawn on April 21, 2003, with her husband out of town, Jessop loaded her children into a van, drove away and met a brother who ferried them to Salt Lake City.

She has taken on the challenges of her new life with a fierce determination. Jessop spent five weeks with her children in a women’s shelter in order to get state-assisted housing. She won custody of her children. And she recovered from a bout of post-traumatic stress disorder.

When money worries seemed about to crush her, there were unexpected windfalls. HBO hired her to sew replicas of undergarments worn by the FLDS for its hit show, ”Big Love.” Strangers showed up with carloads of Christmas gifts. And then the book deal came through, providing her with the time and means to fill her children’s lives with karate lessons and football practices, princess birthday parties and Girl Scouts.

“For me, one of the most rewarding things is for the first time in my life I can parent my kids with nobody sabotaging me,” Jessop said.

Jessop has won most of her battles with the past. All but one.

Betty, her oldest daughter, returned to the FLDS two days after she turned 18 – ending a bitter dispute between mother and daughter over the right path in life.