A quick overview of various religion news items and other links of interest.

AP reports that China has detained four priests from the underground Catholic church.

China’s Catholics are permitted to worship only in churches run by a government-monitored group with no ties to the Vatican. But millions who remain loyal to the pope worship in secret “house churches.”

Meanwhile the US sees more and more non-traditional churches — churches that attempt to be relevant in today’s culture. Canvas Church in Jacksonville, Florida, for example:

It’s not your typical Sunday morning church crowd. From the young and hip — to the older and more conservative folks, everyone seems to have a place at Canvas Church.

They meet every Sunday at the AMC Theatres in the Orange Park Mall. Freshly roasted Starbucks is sold outside the theater, and inside, there is a band playing live music.

“We’re not so much about stained glass and choir robes. That’s OK, but it’s not us,” said Pastor Aaron Maners.

He started the church last year, after moving to Jacksonville from Austin. He wanted to bring people from all walks of life, together under one roof. The roof he chose, isn’t exactly a traditional one. That’s the idea, he says.

“We wanted to have a place that was kind of an even playing field for everyone or a place that was non-threatening,” Maners said.
– Source: Church Service is One of a Kind, First Coast News, July 29, 2007

Judging by the church’s straight-forward statement of faith it is not a so-called ’emergent’ church.

Speaking of the Emerging/Emergent Church, the folks at Pyromaniacs (which you have to see, if only for its amazing graphics) have come up with a collection of Motivational posters for Emerging Christians.

If you want to know what’s behind it all, see this satirical guide to postmodern Christian jargon, which is part of a larger, serious look at the problems surrounding Emergent Church theology and practice. 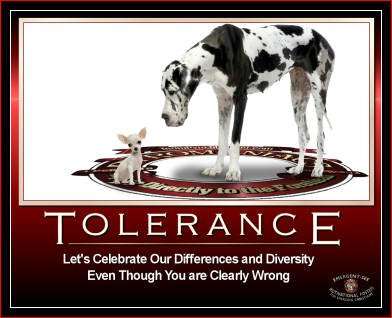 Praying Down the Rain

A priest in Italy is being hailed as a miracle worker by farmers after his prayers for rain appeared to bring an end to a prolonged drought.

Father Angelo Marcandella held evening prayers on three consecutive days at his church in the medieval town of Castell’Arquato near Piacenza, with about 50 farmworkers in the congregation.

On the fourth day the skies opened, ending three months of drought.

If it rains too much and too long — as it has been doing in much of Western Europe, including Amsterdam, the home of Religion News Blog — the Italian farmers will want to have Johan Huibers’ phone number on hand. According to the Daily Mail, Huibers is an eccentric Dutchman (no fair claiming that we all are) who has just built Noah’s Ark in Holland.

And the next time the Rivers Thames, Don or Severn break their banks, local residents might even see Johan and his cross-section of the animal kingdom floating past.

Because this evangelical father-of-three wants to take his 230ft wooden tub from its present home in a backwater of the Dutch canal system across the North Sea to Britain and the wider world.

“Next month, we tow the ark to Rotterdam,” he tells me, “But it would be my dream to take it to Britain.”

He has watched the flooding in central England on the television and he is not surprised.

With half of their country below sea level, the Dutch are the world experts on flooding.

But Johan says that the latest deluge is not about climate change: “It is because people think they don’t need God anymore.

“They want a flat screen television or a car but they don’t want God. And these floods will get worse.

“It is not God punishing us. It is because when we forget God, we make problems for ourselves.”

As we shall see, Johan’s views on society are as Old Testament as Noah himself. He is no fan of modern Holland’s easy-going social attitudes.

But no one can fault the dedication of this hyperactive builder-turned-property developer.

It has taken him just a year to construct a vessel longer than Nelson’s flagship, HMS Victory.

For those who are keeping track, the recently opened Creation Museum has seen 100,000 visitors in just 8 weeks.

If you’ve been a Christian long enough, you’ll no doubt remember Keith Green. The singer/evangelist died 25 years ago, but new, never before heard music by Green is planned for release in August.

Offered a chance to provide an aerial tour of the wooded East Texas pasture that was home to his Last Days Ministries, he didn’t hesitate.

The overloaded, twin-engine Cessna crashed less than 30 seconds after takeoff, killing all 12 aboard. The dead included Green, 28, two of his young children, pilot Don Burmeister and missionaries John and DeDe Smalley and their six children.

That was 25 years ago. Now Green’s work is about to be rediscovered.

EMI/Sparrow Records is painstakingly going through recordings saved by his wife, Melody. An iTunes release with music never before heard by the public is planned for August. More material will be released next year, said Bryan Ward, director of artist development with EMI Christian Music Group.

The July 28, 1982, accident doused one of the brightest lights in the Jesus Movement, a youthful Christian counterculture. The bushy-haired evangelist with a distinctive tenor voice was posthumously inducted into the Gospel Music Hall of Fame.

Green sold between 560,000 and 1 million records, Ward said, although exact numbers are difficult to determine. Green gave away many records, and sales were tallied differently then.

Evangelicals and the Arts

According to an AP article in the Chicago Tribune, Once wary of pop culture and visual art, evangelicals seek a greater role

There are no crosses in Makoto Fujimura’s paintings. No images of Jesus gazing into the distance, or serene scenes of churches in a snow-cloaked wood.

Fujimura’s abstract works speak to his evangelical Christian faith. But to find it takes some digging.

After the 2001 terrorist strikes on the World Trade Center, three blocks from Fujimura’s home, his work explored the power of fire to both destroy and purify, themes drawn from the Christian Gospels and Dante’s “The Divine Comedy.”

“I am a Christian,” says Fujimura, 46, who founded the nonprofit International Arts Movement to help bridge the gap between the religious and art communities. “I am also an artist and creative, and what I do is driven by my faith experience.

“But I am also a human being living in the 21st century, struggling with a lot of brokenness — my own, as well as the world’s. I don’t want to use the term ‘Christian’ to shield me away from the suffering or evil that I see, or to escape in some nice ghetto where everyone thinks the same.”

By making a name for himself in the secular art world, Fujimura has become a role model for creatively wired evangelicals. They believe that their churches have forsaken the visual arts for too long — and that a renaissance has begun.

On the grass-roots and institutional level, evidence is mounting to support that view: Art galleries are opening in churches; prominent seminaries are investing in new centers exploring theology and the arts; and, graduates from evangelical film schools are making Hollywood movies.

In an article titled, Go Home, Tom Cruise! Why does Germany hate Scientologists?, Slate magazine’s Explainer recently tried to explain why many Germans don’t like Tom Cruise and his, er, religion.

Out of 507 words, these were the most enlightening:

Some German officials believe Scientology’s ideology is rooted in a kind of political extremism—a bit of a sensitive area for Germany since World War II. They also argue that Scientology is not a religion but a business, since local churches operate like franchises of the main organization.

That the rest of the article didn’t do much explaining is likely due to the Explainer’s acknowledged source:

Explainer thanks J. Gordon Melton of the Center for Studies on New Religions.

J. Gordon Melton is notorious for his support of a wide range of cults. Some call him the father of cult apologists.

As with so many of his writings, Melton’s booklet on Scientology reads like it should be part of the cult’s PR package.

A much better, more complete explanation of Germany’s views regarding Scientology is posted at the website of the German Embassy in Washington, D.C.:

Understanding the German View of Scientology

Cult of the Hugging Saint

Nah, this is not about that guy who gained a ‘cult’ following by giving free hugs to strangers… CultoftheHuggingSaint.com provides resources on Mata Amritanandamayi Devi, an Indian spiritual leader whom the American media has dubbed “The Hugging Saint.” She is also known as ‘Amma,’ ‘Ammachi,’ or ‘Mother.’