Historians are hopeful that the LDS Church will be more open

You won’t see many people in Tuesday’s Pioneer Day parade dressed up as one of Brigham Young’s polygamous wives or floats touting the Mormon theocrat’s view on cooperative economics.

Like all such pageantry, the annual celebration tends to feature an idealized, heroic view of the Mormon pioneers’ arrival in Utah on July 24, 1847, and that’s the way much of the faith’s history has been written, too.

Watchman Fellowship‘s video Q&A Series – What’s The Deal with…. Using the writings of Mormon prophet Joseph Smith and other Mormon leaders to share what Mormons believe. Get the DVD at www.HelpIKnowAMormon.com.

Now a new survey reveals many Mormons want accounts of their history “to be inspiring, but not sanitized,” says Rebecca Olpin, director of audience needs for the LDS Family and Church History Department. “They want it to be frank and honest. They are looking for the whole story, accounts of real people and a wider scope of history than early 19th-century pioneers.”

It’s not a trivial conclusion.

Mormons believe God commanded them to keep a record of their lives and actions beginning with the church’s founding in 1830 and continuing to the present. To them, history is a kind of theology, and writing it is a sacred responsibility.

That perspective long has put LDS historians and their scholarship at the center of controversy, as they tried to balance accounts of the miraculous with knowledge of human fallibility and flaws. The conflict came to a head in the late 1970s, when Leonard J. Arrington was the church’s official historian. He assembled a crack team of scholars who together produced two single-volume histories of the church, 18 books, about 100 articles for professional periodicals and more than 250 articles for church magazines. They were at the vortex of a movement, known as the New Mormon History, that combined respect for the LDS faith tradition with academic rigor.

Unfortunately, LDS leaders were unnerved by Arrington’s approach. They dismantled his team, restricted access to documents and unceremoniously “released” him from his position as church historian.

Two decades, more sophistication among members and an online revolution later, a renewed sense of balance seems to be reflected in the recent survey.

Olpin’s department was looking to determine what kind of historical approach and products Mormons wanted. So they queried 2,000 LDS Church members who were engaged in genealogy online. Respondents were active in the LDS Church, interested in family history and computer savvy.

The survey revealed that Mormons get a lot of their information about church history from historical novels such as The Work and the Glory or at church-sponsored historic sites such as Palmyra, N.Y.; Nauvoo, Ill.; and Kirtland, Ohio.

“I wish there were an easily accessible and authoritative source that would separate fact from speculation on true but troubling events in [LDS] Church history,” wrote one respondent.

Respondents also said they wanted to see official history expand beyond the church’s first decades to include family histories from more recent converts, pioneering Mormons in other countries and varied cultural traditions. They want to understand the lives and challenges of ordinary believers, not just celebrity Saints.

And they said they wanted it all to be easily available online, which neatly coincides with the LDS historical department’s goal to open its holdings to the public.

Some historians worry that Olpin’s department is focusing too much on the needs of church members and might exclude professional historians, non-Mormons and critics.

When Olpin reported the survey to the Mormon History Association in May, Jonathan Stapley says, “there was palpable fear that historians would lose access and not be a priority of the department.”

Others worried, he says, that the church “could not be a credible source for tough historical issues when there hasn’t been a good track record.”

For his part, though, Stapley has had only a positive experience researching the history of women’s healing practices at the LDS archives. He has a digital copy of a once-restricted collection that has been invaluable in his work.

Though minutes of church meetings, disciplinary hearings, temple discussions and some diaries will remain off-limits, historical department researchers, staff and volunteers have digitized many microfilmed documents, including many pioneer family histories, and personal journals. 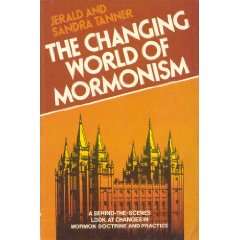 Read More About:
The Changing World of Mormonism
Buy From:
(Amazon.com USA) | Read it online

“Digitization really is going to be a liberator,” says Stapley, an independent Mormon researcher in Seattle. “Entire collections have been restricted because of a single paragraph. Now the church can excise that and make the rest available.”

Four years ago, the church posted a searchable database of 250 pioneer companies. It included about 37,000 individuals but had no full text tied to the sources. Now, the database has 335 companies, with 43,779 individuals, and 8,590 sources, of which 3,022 have full text accounts tied to them, says Christine Cox, the library’s director of customer services.

The church is also engaged in gathering and publishing all archival materials dealing with the life, mission, teachings and legacy of Joseph Smith, Mormonism’s founding prophet. The massive project includes about 5,000 documents and involves more than three dozen researchers, writers, editors and volunteers.

This unprecedented compilation is expected to produce 25 to 30 volumes, including journals, correspondence, discourses and written histories, as well as legal and business documents, Elder Marlin K. Jensen, church historian and recorder, told The Salt Lake Tribune in 2005.

The Joseph Smith Papers Project “is the most important church history project of this generation,” Jensen said at the time.

“It is a fulfillment of our mission,” Olpin said, “to help God’s children make and keep sacred covenants by remembering the great things of God.”