You are here: Home | sexuality | Biblical sex — it could knock your socks off

Let him kiss me with the kisses of his mouth. For your love is better than wine.
– Song of Songs 1:2

Almost everything we think we know about the Bible and sex is wrong.

Instead of being a list of sexual shalt-nots, the Bible contains so much graphic eroticism that parents may want to keep the sacred text away from youth under age 18.

Indeed, that’s what 2,000 Hong Kong residents tried to do in May when they called on a Chinese decency commission to restrict the Bible to adults only because it contains passages that seem to give the okay to incest, rape, adultery and a father offering his daughters to strangers for sexual gratification.

And even though some Bible passages criticize homoeroticism, others non-judgmentally describe prominent men loving other men in a sensual way. The Bible, as well, frequently employs sexual communion as a metaphor for how humans can passionately relate to God.

As if that’s not enough to shatter prim and proper stereotypes, the Bible contains sections such as the Songs of Songs, which highlight sensual delight in ways that could snap open the eyes of unwary adults, let alone children.

Even though the protesting Hong Kong residents were trying to make a wry point about the dangers of Chinese government censorship, The Song of Songs from the Hebrew Bible (which Christians call the Old Testament) is, really, quite hot. It makes 38 metaphorical references to male and female genitals and includes several cheery accounts of oral sex. It does not mention God once.

For good and ill, what we think the Bible says about sex matters a great deal.

In the U.S., the Bible and sex is at the root of the politically manipulated “culture wars.” Canadian laws on everything from marriage to abortion were, until recently, governed by how people read the Bible.

What the Bible says about homosexuality continues to divide the worldwide Christian church — with Canadian Anglicans next week taking on the thorny topic in Winnipeg at their once-every-three years General Synod. 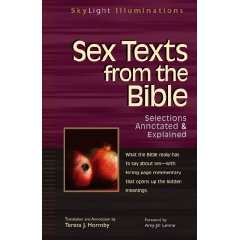 Many deadly-dry books have been written about human sexuality and religion. But this look at selected texts stands out as an especially friendly and smart exploration of “what the Bible really has to say about sex.”

Hornsby, a scholar at Drury University in Missouri, says, “The Bible isn’t anti-sex. It honours celibacy, but it also urges us to have lots of babies, and sings the praises of sexual pleasure and desire.”

Let’s start, as Hornsby does, with the fun stuff.

Those include the Bible’s wonderful sexual euphemisms — in which genitals are described as “feet,” “thighs,” “mandrakes,” “pomegranates” and “hanging fruit.” Meanwhile, the most common euphemisms for intercourse are “to enter,” “to lie with,” “to know” and “to go into.”

Despite the emphasis some Christian and, to a lesser extent, Jewish leaders, have placed on the Bible’s apparent denunciations of some kinds of sex, such passages are few and far between — and even then often contradictory.

It should come as no surprise that some scholars will disagree with some of Hornsby’s historical contextualizing, but that’s the name of the game in Bible study. It’s all about interpretation, formally known as hermenuetics.

Abortion? The issue that makes or breaks political elections in dozens of countries? There is no specific word for abortion in the Bible, Hornsby says.

It is equally difficult, she maintains, to determine any clearcut message from the Bible about the touchy subject of birth control.

Polygamy comes out oddly — since a lot of Bible heroes, including Abraham, Jacob and David, had multiple wives and no one seems to care.

There are, as well, no Biblical words for “husband” or “wife,” unless you consider “master” a synonym for husband.

Actually, master would be a fitting description, because in Biblical times women were considered property, like sheep. In such a context, female adultery was ranked as theft.

When Jesus came along 2,000 years ago, however, he saw adultery as just one sin among many.

Hornsby is one of those scholars who believes Jesus may have pressed for committed relationships between men and women to counter the decadent Roman model of “marriage,” in which elite men kept multiple mistresses and boys as sexual playthings.

What about homosexuality, the wedge issue many people believe marks the dividing line between whether one is a true or false Christian, or Jew or Muslim?

Depending on your family’s values, you might want to make sure the little ones do not read the first book of Samuel. It describes an intimate, loving and sometimes physical relationship between two men, Jonathan and David, the latter of whom became the King of Israel.

And Hornsby is convincing when she writes that the famous story of the city of Sodom had little to do with attacking homosexuality.

This is not to say there aren’t passages, especially from the apostle Paul, condemning those who engage in homosexual acts. But many are not clearcut.

Like many scholars, Hornsby believes Biblical quotes against homosexuality are based on early Jewish beliefs about separatism, about not mixing things that some ancients believed were not meant to be together — like people of different ethnicities and religions, like clothes of different weaves, and in the case of homosexuality, men who behave like a woman during the act of sex.

In the end, the book’s central question can be put this way: Is the Bible irrelevant on sex, or is it the absolute authority?

The answer, as it often does, lies somewhere in the middle.

Some Bible passages about sex now sound bizarre. Some seem life-affirming. Some sound earthy and sensual, while others seem prudish and self-righteous. Yet others offer ethical guidelines everyone might be wise to heed.

Given the varied historical contexts in which the Bible’s sex passages were created millennia ago, Hornsby says it’s unwise for anyone today to look to it for a simplistic guide to contemporary sexual right and wrong.

The Bible’s teachings on sex cannot be literally applied to all times, places and people — with favorite quotes cherry-picked to support our sexual habits, whether liberal or conservative.

Given the diversity of the Bible’s often-spicy sexual content, at the least it seems sensible to be careful how we handle it.

Exploring links between sex and spirituality

(Listed if other than Religion News Blog, or if not shown above)
Douglas Todd, Vancouver Sun, June 16, 2007, http://www.canada.com/vancouversun