You are here: Home | UK headteachers can ban the veil in class

Muslim pupils can be banned from wearing the veil by headteachers, Lord Chancellor Lord Falconer has announced.

He said heads would be perfectly justified in refusing unreasonable demands from Muslim pupils to wear Islamic dress in schools.

His decision comes after a Luton school banned Muslim girl Shabina Begum from wearing a jilbab – a long loose gown – to class.

The Law Lords last year ruled that the school had been justified in its decision. 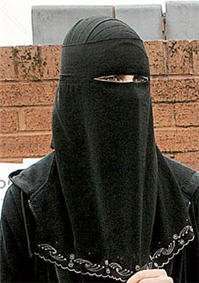 The full-face niqab: Headteachers will be able to tell pupils not to wear it

Lord Falconer told the National Association of Headteachers’ annual conference in Bournemouth that human rights were not at odds with common sense.

Human rights are based on freedom, equality, tolerance and respect, and are not some European initiative but truly British in nature, he said.

He also argued that headteachers who act properly in response to issues such as those raised in the Begum case should not fear a legal challenge under the Human Rights Act.

However, he added that it was important for schools to weigh up the needs and sensitivities of the local community when drafting policies on issues such as school uniforms.

A year ago the Law Lords backed the decision by Denbigh High School in Luton, Bedfordshire, to ban Ms Begum from wearing the jilbab.

She had won an earlier ruling at the Court of Appeal that her human rights had been violated when she was told by a teacher to go home and change into a uniform approved by the school.

Lord Bingham said at the time that the school was fully justified in acting as it did.

“It had taken immense pains to devise a uniform policy which respected Muslim beliefs but did so in an inclusive, unthreatening and uncompetitive way,” he said.

Ms Begum had taken the school’s headteacher and governors to court for denying her the “right to education and to manifest her religious beliefs” under the Human Rights Act and the European Convention on Human Rights.

She had worn the shalwar kameez (trousers and tunic) and headscarf from the time she started at the school at the age of 12 until September 2002, when she and her brother, Shuweb Rahman, said the rules of her religion required her to wear the head-to-toe jilbab.

(Listed if other than Religion News Blog)
Evening Standard, UK
May 7, 2007
www.thisislondon.co.uk