You are here: Home | Faith and Failings: Evangelist Aimee Semple McPherson had both

McPherson’s “willingness to engage with American culture €¦ ultimately redefined the relationship among social activism, religion, gender, and the media in the United States.”
– MATTHEW AVERY SUTTON

In 1906 Azusa Street in Los Angeles shook with worshippers who wept, shouted with joy and spoke in tongues as the Holy Spirit moved them. It was the birth of modern Pentecostalism that today is one of the most potent forces in Christianity.

One year later a 17-year-old woman, born to an adherent of the Salvation Army but undergoing a spiritual crisis, came under the spell of one of Pentecostalism‘s earliest devotees, Robert Semple. She was converted. They were married, and in just over a decade Aimee Semple McPherson became the most prominent Pentecostal and the first celebrity evangelist.

Most biographers credit her success to turning the gospel of hellfire and damnation into one of love, her faith healing and her “illustrated sermons.” But there was also her mastery of the modern media.

McPherson created the first Christian radio station and a film studio by which her voice, image and message of the “Foursquare Gospel” — a mix of pre-millennial Pentecostal Christianity and ardent patriotism — were transported around the world. 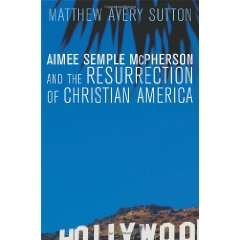 She set the stage for evangelicals of our own time, from Billy Graham to Joel Osteen. Her life also foreshadowed the fate of several televangelists to come.

McPherson’s life was marred by loneliness, bouts of physical and psychological illness and scandal — thrice married, once widowed and twice divorced.

In 1926 she disappeared from a Los Angeles area beach, making headlines in the national press. Most feared she had drowned. Some claimed it was a publicity stunt, while others claimed she ran away with her married employee lover.

McPherson claimed she was kidnapped, but a subsequent investigation proved inconclusive. When she returned 36 days later, she took up her ministry once again and soon reclaimed her celebrity status, which she retained until her death in 1944, just short of her 54th birthday.

She died in a hotel room, and the coroner ruled it death by an accidental overdose of sleeping pills complicated by kidney failure.

McPherson has been the subject of several novels, TV programs, songs and films. Perhaps best known is her thinly disguised role as the religious charlatan Sister Sharon Falconer, in Sinclair Lewis’ Elmer Gantry (1927) and film of the same title (1960).

Recently the PBS series “American Experience” made its contribution to the field with “Sister Aimee,” a documentary based on Matthew Avery Sutton’s new biography, Aimee Semple McPherson and the Resurrection of Christian America.

Sutton, a professor of history at Oakland University, grew up in McPherson’s Foursquare Church.

While not avoiding the sensational, he credits McPherson with being the first preacher to use modern technology in her work, with advancing the role of women in the ministry (she established her own bible school, from which she graduated and ordained men and women), and for attracting a remarkably diverse congregation for her time.

He argues that McPherson’s “willingness to engage with American culture €¦ ultimately redefined the relationship among social activism, religion, gender, and the media in the United States.”

Sutton presents McPherson as an antecedent of the Christian right. He shows how she “brought conservative Protestantism back from the margins to the mainstream of American culture, by arguing that Christians had an obligation to fight for the issues they believed in and boldly claiming that patriotism and faith were inseparable.” She laid the foundation for evangelicalism’s re-emergence after World War II.

Sutton acknowledges the darker side of McPherson’s ministry and its adherents. He discusses their tendency to see themselves as a “besieged minority, a faithful remnant, charged with holding back the forces of the apocalypse,” a tendency that has occasionally lapsed into nativism and even xenophobia.

He points out that upon her death the liberal Protestant magazine The Christian Century denounced McPherson as a fraud.

Nevertheless, he reminds us that Aimee Semple McPherson “exemplified evangelicalism’s appeal to millions of Americans” and suggests that it is time to re-examine her life and legacy.

Bryan F. LeBeau has a doctorate in American history and has written extensively on religion in the United States.