You are here: Home | Jim Bakker | Former televangelist Jim Bakker back on TV

Twenty years ago, Jim Bakker was a man in exile.

Banished from the televangelism empire he founded near Charlotte, N.C. Toppled from power by moral indiscretion and accusations of financial improprieties. Hounded by reporters, day and night. Abandoned by fellow preachers, followers and even friends from his childhood growing up in Muskegon.

“My whole world collapsed,” he said.

On March 19, 1987, Bakker resigned as an ordained minister in the Assemblies of God denomination after it was revealed he had paid $265,000 in alleged “hush money” to a former church secretary, Jessica Hahn, after a sexual encounter with her seven years earlier.

The scandal came with heavy consequences.

Bakker stepped down as president and board chairman of the PTL (Praise The Lord) television ministry and was forced to leave Heritage USA — a 2,500-acre Christian retreat and theme park he had designed and founded in Charlotte, N.C.

The kid from Muskegon made front page news at home and around the world.

He and ex-wife, Tammy Faye Bakker Messner, fled from Charlotte with their two children to a home in Palm Springs, Calif., where they sought refuge from everyone but their closest and most trusted colleagues.

It was, he says, a public fall from grace for which he still seeks forgiveness.

“I apologize,” Bakker said in a telephone interview on March 21, 2007, almost 20 years to the day after his resignation. “I am so sorry. If I’ve ever hurt (anyone) or embarrassed you because of my failures, I say please forgive me.”

Bakker, now 67, and living in Branson, Mo., eventually served five years in federal prison on fraud and conspiracy charges for overselling “lifetime memberships” to a luxury hotel at Heritage USA. Prosecutors charged that Bakker bilked members out of thousands of dollars. 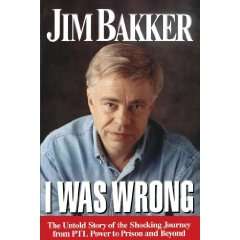 A lifetime member paid at least $1,000 for a three-night stay annually at the hotel. Tens of thousands of memberships were sold, raising more than twice the money to build the hotel. Only one 500-room hotel was completed at Heritage USA, although a larger hotel was under construction at the time of his resignation.

At its peak, the PTL Club television ministry drew 12 million viewers who contributed $1 million annually to the ministry. Between 1984 and 1987, Jim and Tammy Faye Bakker received annual salaries of $200,000 each, plus a $4 million bonus.

In 1989, when Bakker went to prison, he claimed he was penniless.

The year he was forced out of Heritage USA, it drew six million visitors, making it the third largest theme park in the country, trailing only Disney World and Disneyland in numbers. The Christian retreat center hosted 86 religious services each week.

For all of his problems, Bakker is credited with revolutionizing Christian television — with the help of his former co-host and wife, Tammy Faye, whose gospel music and over-the-top personality offset his quiet, almost shy ways.

“There’s a lot more to church than one hour on Sunday,” he said.

Bakker was called to the ministry before he’d even graduated from Muskegon High School in 1959. He had his sights set on being a disc jockey, which was close to being a sin in the church where he grew up — Central Assembly of God — where dancing, drinking and rock-and-roll were forbidden.

One Sunday night, Bakker rushed out of church services to make it to a dance, or some other ungodly occasion, and in his haste, thought he had run over a child in the church parking lot.

It was a moment of conversion for the grandson of the church founder.

He switched his goals, but not the medium with which to spread his message. As a young man, he dreamed of hosting a Christian talk show and “making Jesus real.”

In the 1960s, Bakker hosted the first Christian talk show for Pat Robertson on a fledgling network called the Christian Broadcasting Corp. He hosted “The 700 Club” for eight years, then helped start Trinity Broadcasting Network before moving to Charlotte in 1974.

That was the mountain top.

He crash landed into the valley in 1987.

“I lost everything — friends, my reputation, my ministry,” he said.

Since his release from prison in 1993, Bakker has preached a message of restoration and healing. And hope.

“I’m not back for the perfect people, the people who have it all together,” he said. “I’m here for the broken and the bruised and the hurt. I’m here to say we have a God of second and third chances.”

He uses his own life as example.

“What you see is who I am today with all my scars and disappointments. I have received grace for myself, grace and restoration,” he said.

Dr. Corwin Smidt, professor of the Paul Henry Institute for the Study of Christianity and Politics at Calvin College in Grand Rapids, said Bakker “will always be remembered more for the scandal than his contribution to televangelism.”

“He brought public recognition to the Pentecostal wing of evangelism,” Smidt said, “but his ascendancy was checked.”

After being off the air for 16 years, in 2003, Bakker and his second wife, Lori Bakker, launched a new television ministry — “The Jim Bakker Show” — from Branson, Mo.

Set in a converted restaurant he renamed Studio City Cafe, Bakker hosts an hour-long show Monday through Friday on a set far less lavish and with a budget that is a mere fraction of the former PTL Club. There’s none of the 24-hour broadcasting capabilities or satellite dishes of yesteryear when he and Tammy Faye ruled the air waves.

Tops, there are 30 employees on The Jim Bakker Show — a far cry from the 3,000 workers at PTL Club and Heritage USA.

But none of that fazes Bakker. He’s just glad to be back on television.

His journey to Branson started soon after his release from prison. In 1998, he was volunteering in an inner-city ministry of the Dream Center in Los Angeles where he was introduced to a youth minister named Lori Graham. He likes to say it was love at first sight. They married within the year and moved to Lynn Haven, Fla., where they started a camp for inner-city children — and he yearned to preach again on television.

There were changes on the horizon. In 2002, he and his wife, Lori, adopted five children, all siblings — Maricella, now 17; Lori, 16; Clarrisa, 15; Marie, 11; and Ricky, 9 — whom Lori Bakker had befriended when she worked in an inner-city ministry in Phoenix.

“They are the most wonderful children,” he said. “They make life worth living.”

About that same time, he was invited to speak in Branson, Mo., by a former PTL Club “partner,” Jerry Crawford, who credits Bakker’s ministry for patching up his marriage during a difficult time. Bakker said he almost didn’t accept the invitation.

“I was in a fearful time,” Bakker said. “I didn’t think people would want to hear me speak.”

Much to his surprise, he was not only welcomed, he was embraced by the people of Branson — a city that calls itself “The Live Music Capital of the World.”

“Everywhere we went, people were so kind,” he said.

Almost immediately, Crawford started talking to Bakker about moving his ministry to Branson and promised to help him get back on television.

“I thought: That’s all I need for people to hear (that) Jim Bakker’s going into show business,” he said.

But Branson — with its 40 theaters and 100 shows — is a perfect fit for the televangelist, he said.

“Show business people have had their ups and downs, too. They’ve been broken and disappointed and don’t judge,” Bakker said. “Like the Bible says, love covers you.”

Once a man in exile, Bakker is once again in a building phase.

This year, he and Crawford have started building Morningside Church: A Place of Refuge — a Christian retreat center and retirement community being built on 600 acres of land owned by Crawford just outside of Branson, Mo. The main building will serve as world headquarters for the Jim Bakker Show and its related ministries.

“One of my dreams is to have a live network again,” he said.

The current show will move out of Studio City Cafe and into Grace Chapel, where Bakker will conduct Sunday services, as well as the TV show. Anyone who’s seen his new show sees a different Jim Bakker today than the guy who preached “the gospel of prosperity” 20 and 30 years ago.

There is a familiar feel to his show, whether he’s teaching from the Bible or hosting a roundtable discussion with his wife, Lori. At the end of his hour-long program, Bakker asks for $1,000 “Builders’ Club” donations to help make the down payment on Grace Chapel and promises a Builders Bible sent as “a love gift.” A $5,000 gift will get a donor’s name placed on an “Amazing Grace” plaque. He also asks people to send in donations to help keep the program on the air.

“We need to preach the Gospel now,” he told an audience during an April 10 broadcast. “These are the times of the Bible.”