Sacking a Muslim teaching assistant for refusing to remove her veil is akin to firing a Roman Catholic for going to Mass on a Sunday, a hearing was told yesterday.

Aishah Azmi, 24, is appealing against a tribunal ruling that she could not wear a full-face veil in the classroom.

The test case is estimated to be costing taxpayers up to ?250,000 in legal aid. 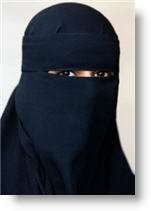 Mrs Azmi was suspended then sacked last year after her pupils at Headfield Church of England Junior School in Dewsbury, West Yorkshire, had complained they found it hard to understand her because they could not see her lips move.

At the London Employment Appeal Tribunal, Mrs Azmi’s counsel, Declan O’Dempsey, compared his client’s dismissal to stopping a Christian from wearing a cross or attending Mass.

He said: “We say the (previous) tribunal should have constituted this as discrimination on the grounds of religious belief.”

The tribunal is expected to rule on the appeal in a written judgment later this year.