You are here: Home | Americans get an F in religion

Stephen Prothero, chairman of the religion department at Boston University, isn’t laughing. Americans’ deep ignorance of world religions — their own, their neighbors’ or the combatants in Iraq, Darfur or Kashmir — is dangerous, he says.

His new book, Religious Literacy: What Every American Needs to Know — and Doesn’t, argues that everyone needs to grasp Bible basics, as well as the core beliefs, stories, symbols and heroes of other faiths. 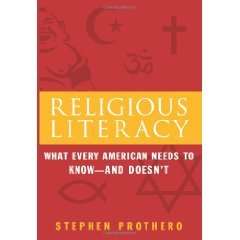 Belief is not his business, says Prothero, who grew up Episcopalian and now says he’s a spiritually “confused Christian.” He says his argument is for empowered citizenship.

“More and more of our national and international questions are religiously inflected,” he says, citing President Bush’s speeches laden with biblical references and the furor when the first Muslim member of Congress chose to be sworn in with his right hand on Thomas Jefferson’s Quran.

“If you think Sunni and Shia are the same because they’re both Muslim, and you’ve been told Islam is about peace, you won’t understand what’s happening in Iraq. If you get into an argument about gay rights or capital punishment and someone claims to quote the Bible or the Quran, do you know it’s so?

“If you want to be involved, you need to know what they’re saying. We’re doomed if we don’t understand what motivates the beliefs and behaviors of the rest of the world. We can’t outsource this to demagogues, pundits and preachers with a political agenda.”

Scholars and theologians who agree with him say Americans’ woeful level of religious illiteracy damages more than democracy.

Goff cites a widely circulated claim on the Internet that the Quran foretold American intervention in the Middle East, based on a supposed passage “that simply isn’t there. It’s an entire argument for war based on religious ignorance.”

“We’re impoverished by ignorance,” says the Rev. Joan Brown Campbell, former general secretary of the National Council of Churches. “You can’t draw on the resources of faith if you only have an emotional understanding, not a sense of the texts and teachings.”

But if people don’t know Sodom and Gomorrah were two cities destroyed for their sinful ways, Campbell blames Sunday schools that “trivialized religious education. If we want people to have serious knowledge, we have to get serious about teaching our own faith.”

Prothero’s solution is to require middle-schoolers to take a course in world religions and high schoolers to take one on the Bible. Biblical knowledge also should be melded into history and literature courses where relevant. He wants all college undergrads to take at least one course in religious studies.

He calls for time-pressed adults to sample holy books and history texts. His book includes a 90-page dictionary of key words and concepts from Abraham to Zen. There’s also a 15-question quiz — which his students fail every year.

But it’s the controversial, though constitutional, push into schools that draws the most attention.

Only 8% of public high schools offer an elective Bible course, according to a study in 2005 by the Bible Literacy Project, which promotes academic Bible study in public schools. The project is supported by Freedom Forum’s First Amendment Center, a Washington, D.C., non-profit that promotes free speech.

The study surveyed 1,000 high schoolers and found that just 36% know Ramadan is the Islamic holy month; 17% said it was the Jewish day of atonement.

Goff says schools are not wholly to blame for religious illiteracy. “There are simply more groups, more players. Students didn’t know Ramadan any better in 1965, but now there are as many Muslims as Jews in America. It’s more important to know who’s who.”

Also today, “there is more emphasis on religious experience as a mark of true religion and less emphasis on doctrine and knowledge of the faith.”

Still, it’s the widely misunderstood 1963 decision by the U.S. Supreme Court that may have been the tipping point: It removed devotional Bible reading from the schools but spelled out that it should not have been removed from literature and history.

“The decision clearly states you can’t be educated without it, but it scared schools so much they dropped it all,” Goff says.

“Schools are terrified of this,” says Joy Hakim, author of several U.S. history textbooks. She’s in her 70s but remembers well as a Jewish child how she felt like an outsider in schools that pushed Christianity in the curriculum.

But she says the backlash went too far. “Now, you can’t use biblical characters or narrative in anything. We’ve stopped teaching stories. We teach facts, and the characters are lost.”

Religion, like the arts, has become an afterthought in an education climate driven by “the fixation on literacy and numeracy — math and reading,” says Bob Schaeffer of the National Center for Fair & Open Testing, a group critical of the standards-based education movement. “If the ways schools, teachers, principals and superintendents are judged all depend on math and reading scores, that’s what you’re going to teach,” he says.

Still, it’s a tough tightrope to walk between those who say the Bible can be just another book, albeit a valuable one, and those who say it is inherently devotional.

The First Amendment Center also published a guide to “The Bible and the Public Schools,” which praised a ninth-grade world religions course in Modesto, Calif., and cited a study finding students were able to learn about other faiths without altering their own beliefs. But it also said the class may not be easily replicated and required knowledgeable, unbiased teachers.

Leland Ryken, an English professor at evangelical Wheaton College in Wheaton, Ill., tested a 2006 textbook, The Bible and Its Influence, underwritten by the Bible Literacy Project. Ryken favors adding classes in the Bible and literature and social studies. But he cautions, “Religious literacy and world religions are not the same as the Bible as literature. It’s a much more loaded subject, and I really question if high school students can get much knowledge beyond a sense of the importance of religion.”

The Bible and Its Influence has been blasted by conservative Christians such as the Rev. John Hagee, pastor of the 18,000-member Cornerstone Church in San Antonio. Hagee calls it “a masterful work of deception, distortion and outright falsehoods” planting “concepts in the minds of children which are contrary to biblical teaching.”

Hagee wrote to the Alabama legislature opposing adoption of the text, citing points such as discussion questions that could lead children away from a belief in God. Example: Asking students to ponder if Adam and Eve got “a fair deal as described in Genesis” would plant the seed that “since God is the author of the deal, God is unfair.”

Hagee prefers the Bible itself as a textbook for Bible classes, used with a curriculum created by a group of conservative evangelicals, the National Council on Bible Curriculum in Public Schools, based in Greensboro, N.C. The council says its curriculum is being offered in more than 300 schools.

“And 22 of them, including several using the Greensboro group’s curriculum, were clearly over the line,” teaching Christianity as the norm, and the Bible as inspired by God, says Chancey. One teacher even showed students a proselytizing Power Point titled, “God’s road map for your life” that was clearly unconstitutional, he says.

The controversies, costs and competing demands in the schools have prompted many to turn instead to character education.

But classes promoting pluralism and tolerance fail on the religious literacy front because they “reduce religion to morality,” Prothero says, or they promote a call for universal compassion as if it were the only value that matters.

“We are not all on the same one path to the same one God,” he says. “Religions aren’t all saying the same thing. That’s presumptuous and wrong. They start with different problems, solve the problems in different ways, and they have different goals.”

(Listed if other than Religion News Blog, or if not shown above)
Cathy Lynn Grossman, USA TODAY, Mar. 7, 2007, http://www.usatoday.com