You are here: Home | Jonestown revisited

It’s been 29 years, but the archival images of those hundreds of corpses, lying just as they fell, scattered across an eerily silent Jonestown compound, are no less shocking or horrific.

The tragic saga of Rev. Jim Jones and his followers still has something relevant to say about abused power, unconditional influence and extremist faith.

Particularly this week, when — quite coincidentally, it seems — not one but two TV-bound Jonestown documentaries are being screened at Toronto movie theatres.

The first, Jonestown: Paradise Lost, was presented Monday night as part of the Hot Docs Festival. Having already aired on the History Channel in the U.S., it will make its Canadian broadcast debut on VisionTV Tuesday at 9 p.m.

The other film, Jonestown, The Life and Death of Peoples Temple screens tonight at the Bloor Cinema and will then be broadcast Monday, April 9, as part of the PBS series American Experience.

The former, which is also part recreated docudrama, casts actor Rick Roberts (An American in Canada) as a somewhat unlikely Jim Jones (certainly no Powers Boothe, so convincingly chilling in the 1980 teleflick, Guyana Tragedy), particularly when juxtaposed with the harrowing images of the real Jones berating his worshipful, cowering flock.

The documentary gets its verisimilitude, beyond this limited news and home-movie-style footage, from interviews with former Jonestown residents — among them Stephan Jones, one of the three surviving sons of Jim Jones from an extended family of nine biological and adopted children.

One of the adoptees, the African-American Jim Jones Jr., is a participant in the latter film Life and Death of Peoples Temple.

“For many years,” he says, “I went by James Jones, just as a disassociation. But in the last 15 years, I’ve gone by Jim Jones. That’s what I was called as a young man and that’s what I’m called now.

“A lot of times when I introduce myself, the first response I get is, `Oh, don’t serve me any Kool-Aid!’ But I don’t take it personally, because I know Jonestown and the Kool-Aid reference have just become a part of our society.” 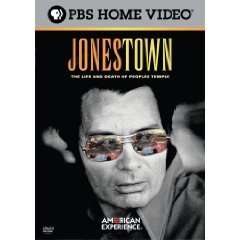 But Jonestown also continues to resonate in deeper, more subtle and insidious ways.

“Just look at our political system,” offers Stephan Jones, the biological Jones progeny, who was in town this week for the Hot Docs screening. “So much of how I see people get into office today are exactly the tactics my father used.

“I was just saying this the other day, I’m not here, nor am I qualified to judge George Bush’s credentials as a president, but it looks very much to me like the main if not the only reason that man is in office is fear. And the fact that he played on that fear. And that we let him play on that fear.

“I see a lot of parallels. It is really about bringing it to the present. Let’s stop talking about what a tragedy this was — it happened 30 years ago, there’s no taking it back. Maybe, if we’re open and honest about it, there’s some stuff that we can pull from it that we can use, so those people didn’t die in vain.”

To that end, he is most anxious this interview include a reference to the website, Alternative Considerations of Jonestown and Peoples Temple, jonestown.sdsu.edu.

“I’m one that believes there are many different perspectives, and that none of them is better than another,” he says.

Though allied each with competing documentaries, the Jones brothers remain close.

In fact, Stephan has just gotten off the phone with his brother Jim’s young son (he has three daughters of his own), who is following family tradition onto the basketball court. The Jones boys, 18 and 17 at the time, only managed to miss the mass suicide that night of Nov. 18 by refusing to return right away from a basketball tournament in Georgetown.

“I certainly rebelled against my father,” confirms Stephan, describing in particular one screaming argument, which ended with each of them, father and son, holding a cocked, loaded gun to his own head.

“I don’t think it was the best kind of rebellion. It certainly wasn’t effective. And I was complicit in many other ways …

“There were many times I was in the congregation, just waving my arms and praising Jim, and looking around seeing a bunch of other people doing it and thinking I was the only one who was faking it, wondering `What’s wrong with me? Why am I so selfish? Why can’t I see the greater good?’ But in retrospect, maybe 50 per cent of them were secretly doing the exact same thing.”

Jim Jones Jr. saw the greater good, and ultimately beyond it.

“It wasn’t blind faith,” Stephan later concurs. “There were other responsible adults in that community. They were some of the best people I ever met — and some of the worst.”

After a dark period of readjustment and self-recrimination, Stephan got his life together, married and went into the office furniture business.

He has contributed to other earlier Jonestown projects, but only selectively; for example, he was also asked to participate in the Life and Death film, but passed.

And he has not, nor does he plan to, see the film in which he is featured, Paradise Lost.

“The finished product wasn’t nearly as important to me as the process and the people that I was working with,” he insists.

“It was a long time ago for me. But I guess that the more I’m willing to talk about it, the more healing it is for me and the more helpful it is for others.”

(Listed if other than Religion News Blog, or if not shown above)
Rob Salem, The Toronto Star, Mar. 7, 2007, http://www.thestar.com