You are here: Home | Yearbook of Churches issues 75th edition

New York, March 5, 2006 — The National Council of Churches’ Yearbook of American and Canadian Churches issued its 75th edition this month.

Widely considered the nation’s oldest and most reliable sources of church membership and growth trends, the 2007 edition reports on a record number of 224 national church bodies. The reports include brief histories, leadership and headquarters information, and ranks the 25 largest churches by membership.

The 439-page paperback Yearbook is also accessible on the Internet using a pass code printed on the inside back cover. The information in the yearbook will be updated on line twice during the year. In addition, a compact disc exists of data dating from 1916 through 2000. 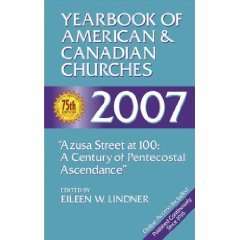 “We at the Yearbook are pleased to take out place in this important task of annually capturing a snapshot of American religious life,” says the Rev. Dr. Eileen W. Lindner, editor of the yearbook since 1998. Lindner is also Deputy General Secretary of the NCC for Research and Planning.

The statistics in the 2007 Yearbook, collected by the churches in 2005 and reported in 2006, “reflect the continued overall vitality of church participation, and account for the religious affiliation of almost 166 million Americans,” Lindner said.

Pentecostal churches have experienced “remarkable” growth, says Editor Lindner. For example, the Assemblies of God reported a membership of 50,386 in the 1925 edition of the Yearbook. This year, its reported membership is 2,830,861.

“Azusa Street … may have been the focal point of the emerging Pentecostal movement,” Rodgers writes in his carefully balanced essay. “However, recent scholarship has established the need to better understand the broader context before making such judgments.”

The 2007 Yearbook of American and Canadian Churches costs $50 and may be ordered at www.electronicchurch.org

The NCC is the ecumenical voice of America’s Orthodox, Protestant, Anglican, historic African American and traditional peace churches. These 35 communions have 45 million faithful members in 100,000 congregations in all 50 states.

(Listed if other than Religion News Blog, or if not shown above)
, National Council of Churches, Mar. 5, 2007, http://nccusa.org