In September, up to 150 students are expected to attend the Al-Kindi school outside the southeastern city of Lyon.

“This school is opening in a spirit of cultural freedom. Children can come with the clothes they want and the ideas they have,” said Hakim Cherqui, vice president of the Al-Kindi association, named after a 9th century Arab philosopher. 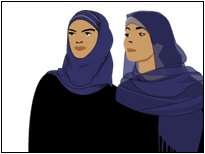 The school was given the green light to open on Friday after battling half a year with the Lyon Academy which oversees schools in the region.

Officials cited both security and administrative concerns in their refusal to approve the school. But on Friday the High Council on Education suddenly approved the school’s opening.

Closed on Fridays, the Muslim holy day, the Al-Kindi school is to teach a regular curriculum and include as options “the culture of Islam” and study help, school officials said. It is to teach some languages uncommon in most French schools from Arabic to Turkish and Chinese.

France has the largest Muslim community in Western Europe, estimated at 5 million, and Islam is the nation’s second religion, after Roman Catholicism.

Most private schools in France are Catholic but, until Monday, there were only two Muslim schools: the Averroes Lycee, or high school, opened in 2003 in a mosque in the northern city of Lille, and a Muslim junior high school was founded in 2001 in Aubervilliers, outside Paris.

There were predictions that a 2004 law banning Muslim head scarves and other “ostentatious” religious symbols from classrooms would lead to an increase in Muslims in Catholic schools to avoid the ban or new Muslim schools.

(Listed if other than Religion News Blog, or if not shown above)
, AP, via the International Herald Tribune, Mar. 5, 2007, http://www.iht.com/