You are here: Home | Scientology | A Legacy of Craziness

If you were to drive about two hours east of Santa Fe, watching from your car as the sagebrush desert rocked past and rose up into wooded hills, you might just find yourself near the tiny ranching community of Trementina, a town that—despite being home to more than two hundred people, its very own post office, and a gripping history loaded with pine oil harvests and the making of turpentine—really doesn’t seem to have a lot going on.

However, if you were to fly over that same area, you might just see something interesting—something like, according to some locals, men with guns staring up at your plane—or something like an enormous symbol bulldozed into the side of a desert mountain.  Two epic and overlapping circles, over a third of a mile long from end to end, seem to drape like Daliesque clocks over the bulging New Mexico landscape, each with a sizeable diamond shape cut into its middle. 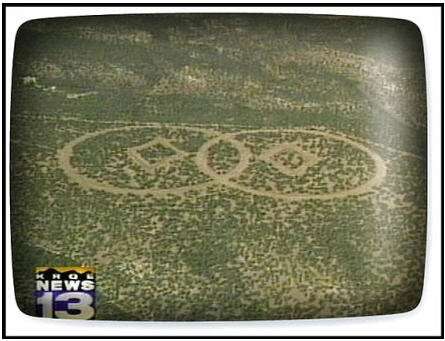 Just about a mile southwest of these symbols lies a private, concrete, mesa-top runway, and if you were to fly over with the right people, you might just be able to land there.  From there, after exiting your plane, you could move on to one of at least three multi-million-dollar homes in the surrounding hills—or you could make your way toward the circles, near which a vault-like steel door guards a network of subterranean, steel-lined tunnels.  These tunnels have been especially designed to withstand a nuclear blast, and if you happened to be allowed to enter them, as the news show “20/20” was in 1998, you would find hundreds of titanium boxes.  Inside those boxes you would find hundreds of thousands of stainless steel plates engraved with bizarre and jargon-filled writing, along with tens of thousands of playable records made of nickel—records containing the spoken words of a mediocre science fiction writer named L. Ron Hubbard.

Hubbard’s imaginative interest in science fiction, combined with his earnest involvement in certain occult groups in 1940s Los Angeles, led him to write the 1950 book Dianetics: The Modern Science of Mental Health.  The book suggested that almost all human problems—whether mental or physical—are caused by past traumas inflicted on people’s souls.  Such traumas, Hubbard claimed, can only be overcome with the help of an “auditor”—a highly paid spiritual counselor skilled in using an “E-meter,” a scientifically ridiculed device that gently shocks its users while measuring the extent of the negative energy in a person’s soul.  In 1952, Hubbard went on to develop the ideas of Dianetics into a complex philosophy he called Scientology, and in 1953 he reinvented this philosophy as a religion—the Church of Scientology.

Referred to by curiosity-seekers as Trementina Base, and by Scientologists as San Miguel Ranch or merely “The Ranch,” the Church of Scientology’s over-four-thousand- acre property in New Mexico’s San Miguel County was selected, according to a January 23, 1994 story in the Albuquerque Journal, in 1986 because of the low likelihood of its ever being nuked and because of its distance from the corrosive effects of big city pollution.

The sprawling design that marks the ranch is the official symbol of a Church of Scientology-owned corporation called the Church of Spiritual Technology and, according to a November 27, 2005 article in the Washington Post, marks the property as a place for Scientologists of the distant future to return to from other planets in the universe.

According to Jessica Weed, a one-time roommate of two New Mexican Scientologists, the mansions on the property also serve as a sort of retreat for many of the group’s members.

“During their stay with us, they would sometimes go get dinner and a movie without telling anyone from the Albuquerque chapter of Scientology where they were going,” Weed said.  “When they did this, the phone would ring off the hook for them with different people from The Ranch or people from the Albuquerque chapter.  They wanted to know where they were, what they were doing, who they were with, when they were going to be back, et cetera.  When our roommates came home and heard about the ten-plus phone calls in a four or five hour period, they always acted like, ‘What is wrong with us going somewhere without all of them for a few hours?  Can’t we have a life?’”

Such paranoia and invasiveness have become hallmarks of Scientology.  The group has become infamous for its eagerness to file lawsuits against anyone who speaks out against them, has encouraged its members to completely avoid all friends and family who are even slightly critical of the group, and has seen its top-ranking officials convicted of attempts to frame its critics for a wide range of serious crimes.

With such behavior, with the way the group aggressively solicits money from its followers, with the blind adoration its followers give the memory of L. Ron Hubbard, with its increasingly strange beliefs, and with the myriad times it’s been sued over the neglectful deaths of its followers—as result of the group’s notoriously strong disapproval of medicine and psychology—the Church of Scientology has made it very difficult for people to discuss them without the word “cult” coming screaming into mind.

About This Article
This article is posted to Religion News Blog with the kind permission of its author, Mike Smith.
The article was first published on his website, My Strange New Mexico — a unique column that features strange New Mexico history and lore.
Mike Smith is also the author of the book, Towns of the Sandia Mountains, and of the Amazon Guide to the Music of Soltero
See also: A Place in the Desert for New Mexico’s Most Exclusive Circles
Church of Scientology tries to stop TV report about compound
Research resources on Scientology

They may, however, have given us a legacy.

When archeologists of the distant future sift through the remains of what we are today, perhaps one of the only things they’ll find intact will be the nickel records of the San Miguel Ranch.  Perhaps they’ll pull a stack from a titanium case, set one on a solar-powered record player—beneath a large, engraved sign reading “Record Player”—and the voice of L. Ron Hubbard will begin to drone.

Seventy-five million years ago, his voice will say, Xenu, evil alien ruler of the universe, drugged and kidnapped billions of treasonous galactic citizens and brought them to Earth in spaceships—spaceships surprisingly similar to airplanes.  Xenu then had their paralyzed bodies piled all around the volcanoes of Hawaii, bombed the volcanoes until they erupted, and used the lava to massacre almost everyone.  The souls of these victims were then captured in the air, forced to watch confusing movies about such things as God and Catholicism, and eventually released to gather collectively inside the bodies of the few individuals not destroyed.  Eventually, all of humankind evolved from of these soul-choked final few, the voice will say, and the dead alien souls have remained trapped within us, troubling us to this day.

Perhaps they will think, “So this is what they all believed.”

And perhaps they will think, “So this is what they all were like.”