You are here: Home | Critic of Islam Finds New Home in U.S.

WASHINGTON, (AP) — As a child, Ayaan Hirsi Ali fled violence in Somalia with her family. As an adult she fled Kenya to escape an arranged marriage. She left her adopted Holland after she was caught up in political turmoil and had her life threatened.

Now Hirsi Ali — a brave critic of Islam to her supporters, a bigot to her critics — has found refuge in the intellectual bastion of leading U.S. conservatives.

Hirsi Ali joined the American Enterprise Institute last September, after a sometimes stormy 14 years in the Netherlands, where she was a member of parliament and became a central figure in two events that jolted the nation.

First, after she wrote a script for a film that depicted naked women with Quranic verses scrawled on their bodies, a Dutch-born Muslim gunned down the filmmaker, Theo van Gogh. A letter threatening Hirsi Ali was left on a knife plunged into van Gogh’s chest.

Next, a fight within Hirsi Ali’s political party over her Dutch citizenship brought down the government.

These days, Hirsi Ali is promoting her autobiography, “Infidel.” It gives a graphic account of how she rejected her faith and the violence she says was inflicted on her in the name of Islam.

“I’m an apostate. That’s why the book is called ‘Infidel,'” she said in a telephone interview from New York.

CAIR
Islam’s flawed spokesmen: “Some of the groups claiming to speak for American Muslims find it impossible to speak out against terrorist groups.” […]
Research resources on CAIR

“We believe that she will bring an increase to the level of anti-Muslim bias in this country that we saw her bring to the situation in Europe,” the council’s communications director, Ibrahim Hooper, said in an interview Saturday. “Unfortunately her message is one of bigotry, not one of mutual understanding.”

Her new colleagues at the American Enterprise Institute laud Ali Hirsi as a brave voice taking on a taboo subject.

“She’s very original, a very courageous thinker, and she has independence of mind,” said Christina Hoff Sommers, an institute fellow who specializes, among other things, in feminism.

At the institute, Hirsi Ali’s studies will involve Islam and women: the relationship between the West and Islam; women’s rights in Islam; violence against women propagated by religious and cultural arguments; and Islam in Europe.

Many institute scholars have had a close relationship with the Bush administration. Among its senior fellows are former House Speaker Newt Gingrich; John R. Bolton, former U.S. ambassador to the United Nations; and Lynne Cheney, wife of Vice President Dick Cheney. 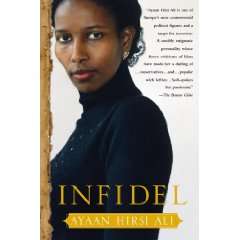 It may seem like odd company for a woman born in a Mogadishu hospital 37 years ago.

“I’ve been accused of selling out,” she said. “I’ve been told, ‘You’re hanging the dirty laundry outside.'”

Ali Hirsi’s book provides a graphic account of how her grandmother had her subjected to genital mutilation, sometimes called female circumcision, when she was 5 years old. The practice began in Africa, before Islam, but some African Muslim societies still see it as a requirement of religion.

She also describes a time when she was a teenager in Kenya, a majority Christian country with many Muslim Somali refugees, and a Quran teacher cracked her skull after she challenged his insistence that students write Quranic verses on wooden boards and memorize them.

“I started to call him uncivilized and backward and said he lived in the time of ignorance before Islam had come around and this was an outrageous system,” she said. The man bashed her head against the wall.

She lied to be accepted as a refugee in Holland, became a Dutch citizen, graduated from prestigious Leiden University and won a seat in the Dutch parliament for a party that was tough on immigration. She became known as a firebrand.

That led to her collaboration with van Gogh on the short television movie, “Submission.” In 2004, a man enraged by the movie shot van Gogh seven times and slit his throat on an Amsterdam street, leaving the note threatening Hirsi Ali.

Her lie when she entered the country — she used an assumed name — caught up with her last year. By that time her falsehood was widely known, even to her good friend Rita Verdonk, the immigration minister. Because of a notorious similar case in which Verdonk expelled a young woman, she came under pressure to cancel Hirsi Ali’s citizenship. She did, and the six members of the government’s smallest coalition party resigned in protest. The government fell, although Verdonk had used a technicality to restore Hirsi Ali’s Dutch citizenship.

Considering van Gogh’s death, and her continuing outspokenness about Islam, Hirsi Ali said she no longer can feel safe without bodyguards in the presence of even moderate Muslims.

Unlike many world leaders, including Bush, who say Muslim terrorists are distorting the peaceful Islamic religion, Hirsi Ali said the terrorists in large part have truth on their side: The violence is in the Quran and the hadith, the traditions of the Prophet Muhammad, she said.

Islam today, she said, “is not my grandmother’s amulet-wearing, superstitious sort of Islam that is just comforting for the believer.” Today’s Islam sees the world as its enemy, she said. “And you wage war against your enemies.”

The Council on American-Islamic Relations’ Hooper contends that she exaggerates to further her agenda.

“She is just one more Muslim-basher on the lecture circuit,” he said.