The Raelian movement, an atheistic cult that claims humans were created by aliens, has reverted to its original symbol: a swastika inside a Star of David. 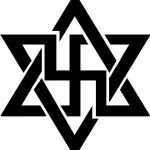 The symbol of the Raelian Movement
The movement, established by former French racing car driver Claude Vorhilon, says its swastikas are an ancient symbol of peace. The group stopped using the symbol in 1992, replacing the swastika with a cross, when it offended Jews they had approached for support.

Jews are important targets of the cult since Rael, Vorhilon’s adopted name, believes the ancient race of aliens he refers to as the Elohim created the human race in what is now Israel.

The group has been trying to establish an embassy in Jerusalem for years, claiming the Elohim will return once the embassy is built, but the Israeli government has rebuffed the group’s efforts.

The Raelian Web site, at raelianews.org, states that Raelians are “now joining with Hindus and Buddhists to educate the rest of the population about the true history of the swastika and to make sure their symbol is forever respected.”

(Listed if other than Religion News Blog, or if not shown above)
, Jewish Telegraph Agency, Feb. 9, 2007, http://jta.org