You are here: Home | muhammad cartoons | French Court to Rule on Whether Cartoons Insulted Muslims

Charlie Hebdo, a weekly, defends its publication of the cartoons about the prophet Muhammad under freedom of expression laws. A Paris court will hear the case tomorrow and on Feb. 8. Witnesses will include politicians, a presidential candidate, and writers.

The hearing will go over many of the same issues debated throughout the world after the Danish newspaper Jyllands Posten a year ago printed 12 cartoons about the prophet Muhammad, sparking riots and anti-Danish boycotts in parts of the Muslim world. It will also set out jurisprudence on how officially secular France deals with criticism of Islam, which, thanks to immigration, has become the country’s second-largest religion.

What Muslims Should Protest
In the civilized world people value freedom of speech. Also, in the civilized world, kidnappings, beheadings, bombings, death threats, destruction of property, and other acts of terrorism are unacceptable responses to insults (real or perceived). Stop protesting free speech. Stop protesting cartoons. Stop being hypocritical. Protest despicable behavior instead:

“This is a case that goes way beyond just freedom of expression,” Richard Malka, Charlie Hebdo’s lawyer, said in an interview. “It puts into question the Republic and the whole notion of secular society.”

The cartoons aren’t covered by freedom of speech, says Francis Szpiner, a lawyer for the Paris Mosque. “Racism is not an opinion,” he said in an interview. “It’s abuse and it’s a crime.”

Inciting racial hatred is punishable by six months in jail and 22,500-euro ($29,000) fine in France. Szpiner says his clients aren’t seeking any penalties.

The Paris Mosque and the Union of Islamic Organizations of France (UOIF) are suing Charlie Hebdo over cartoons published on Feb. 8, 2006. Two of them were reprinted from Jyllands Posten at the height of the controversy. They show Muhammad’s turban as a bomb and Muhammad telling suicide bombers they should stop coming to heaven because he’s run out of virgins.

The third cartoon was Charlie Hebdo’s own and was the edition’s cover. It shows Muhammad holding his head and saying: “It’s hard to be loved by so many idiots.” 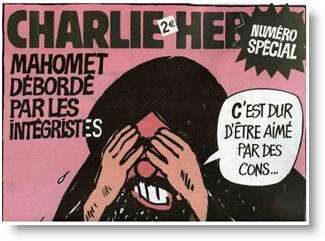 “It’s hard to be loved by so many idiots.”

“It’s not admissible to make an amalgam between Islam and terrorism,” says Szpiner. “They say they are just poking fun at fundamentalists. But what’s a fundamentalist? I’m not aware of any definition. It’s an insult to all Muslims.”

Muslims make up between 3 percent and 10 percent of France’s 61 million inhabitants, according to various studies. France doesn’t allow official statistics on race and religion. Catholics make up 60 to 80 percent of the population, although only a minority practices the religion, polls show.

Jyllands-Posten, Page 3 of culture section, Sept., 2005.
The cartoons can be viewed here.

“Mr. Bayrou is appearing at the request of Mr. Val to defend the principle of freedom of speech,” said Bayrou’s spokeswoman Ophelie Rota, referring to Charlie Hebdo’s publisher Philippe Val.

Malka says he’ll also call two French Muslim writers, Mohammed Sifaoui and Abdelwahab Meddeb, who have supported Charlie Hebdo, to show “this is not about anyone against Islam, but enlightened Islam against obscurantist Islam.”

Szpiner says Malka is turning the trial into a media circus. “Mr. Val is trying to sell a trial that isn’t going to happen,” Szpiner said. “He wants you to think that you have to be on his side to defend liberty of expression, which isn’t under threat, and defend secularism, which isn’t threatened either. The Muslims of France aren’t trying to call for a return of blasphemy laws.”

French blasphemy laws were abolished in the Revolution in 1789, reinstated in 1815, and then definitely abolished in an 1881 law on press freedom.

Malka and Szpiner say there is little jurisprudence in this case because almost all similar suits have been brought by Catholics, where there’s not the question of ethnic slurs.

In 2005, the French Catholic Church successfully sued jeans maker Marithe et Francois Girbaud over an advertisement showing a group of androgynous, sparsely-clad young people lounging along a table. The scene was too reminiscent of the Last Supper and therefore an affront to believers, the court ruled.

Charlie Hebdo was founded in 1960 and was first called Hara-Kiri. Authorities banned it several times, including in 1970 when it published a cover deemed to make light of Charles de Gaulle’s death. To keep publishing, the same team started a new magazine called Charlie Hebdo, named after the Peanuts character, published in France by one of the same publishers.

It went bankrupt in 1981 and was reborn in 1992. The magazine makes crude fun of all political, cultural and religious leaders. It usually sells up to 100,000 copies a week, said spokeswoman Liliane Roudiere. The Muhammad cartoons issue went through two extra printings and sold 500,000, she said.

Another French newspaper, France Soir, also printed the cartoons out of solidarity with Jyllands Posten. Its editor, Jacques Lefranc, was then fired by Raymond Lakah, the newspaper’s French-Egyptian owner.

(Listed if other than Religion News Blog, or if not shown above)
Gregory Viscusi, Bloomberg, Feb. 6, 2007, http://www.bloomberg.com