You are here: Home | Hymns replaced by U2 lyrics at church

John Lennon once enraged Christians by claiming that the Beatles were bigger than Jesus. The Church of England is now recognising the pulling power of rock stars by recruiting Bono, the singer and lyricist of U2, in its bid to boost congregations.

A Church of England bishop is to preside at this country’s first “U2-charist“, an adapted Holy Communion service that uses the Irish supergroup’s best-selling songs in place of hymns.

In what is more rock concert than Book of Common Prayer, a live band will belt out U2 classics such as Mysterious Ways and Beautiful Day as worshippers sing along with the lyrics, which will appear on screens. The atmosphere will be further enhanced by a sophisticated lighting system that will pulse with the beat, and striking visual images of poverty and drought.

Despite his rock star antics, including swearing on live television, Bono is regarded as a Christian icon by many who point to the spiritual content of his music.

His high-profile anti-poverty campaigns with fellow Irish musician Bob Geldof have elevated him to saintly status in some circles.

See Also
Lure of U2 draws churchgoers to special services
Tucson church rises on the rock of U2
Episcopal ‘U2-charist’ uses songs in service
One Step Closer: Why U2 Matters to Those Seeking God
Get Up Off Your Knees: Preaching the U2 Catalog
Walk On: The Spiritual Journey Of U2

But while Bono is open about his Christian influences, he has also clashed with Church leaders over issues such as Aids.

Traditionalists who fear the Church is diluting its message to attract the young will be dismayed at its willingness to embrace Bono.

Such doubts are not shared by the Bishop of Grantham, the Rt Rev Timothy Ellis, who is organising the U2-charist in St Swithin’s church in Lincoln in May.

“Bono and Bob Geldof are very human, but they have demonstrated that they believe there is sanctity to life that has to be protected,” he said. “If that makes them saints, then I would go along with that.”

Bishop Ellis said that the eve-of-Pentecost service in the city centre church would be a traditional one, but stripped down to basics.

“We are hoping the service will be a fresh way to look at worship, less formal, and less rigid,” he said.

“People will be able to express themselves in any way they wish.

“This is not designed to replace traditional services but to enhance the worship provision of the Church.

“We need to try new expressions. If we don’t try to update and refresh our thinking we will die.”

Seating will be moved so that the 500-strong congregation can dance or wave their arms.

The bishop, who will be chief celebrant, said he had yet to decide whether to swap vestments for jeans.

The Lincoln U2-charist is adapted from an American phenomenon that has swept across the US and even reached Hong Kong.

It will be recorded by the BBC for a programme to be broadcast later in the year, and the bishop hopes it will be replicated across Britain. 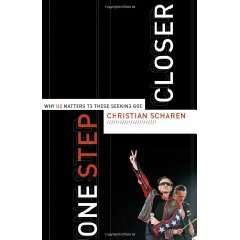 The service will focus on the Millennium Development Goals to reduce world poverty, a cause close to Bono’s heart.

The Bishop said that he did not expect the Irish singer to attend the U2-charist in person, though he was hoping he might send a message. The £10,000 cost of equipment will be partly funded by the diocese of Lincoln, and the Archbishop of Canterbury, Dr Rowan Williams, will also be kept informed.

The idea was devised by the Rev Paige Blair, an American Episcopal priest in York Harbor, Maine, who held the first service in 2005. Since then, she has advised about 150 churches on U2 Eucharists in 15 states and seven countries.

“Bach and Handel were the popular music of their day, and they had trouble getting played in church,” she has said.

“The Methodist hymn writers once wrote contemporary music. Are we worshipping Bono? Absolutely not. No more so than we worship Martin Luther when we sing A Mighty Fortress Is Our God.”

When Love Comes To Town
I was there when they crucified my Lord,
I held the scabbard when the soldier drew his sword,
I threw the dice when they pierced his side,
But I’ve seen love conquer the great divide

Elevation
Explain all these controls,
Can’t sing but I’ve got soul,
The goal is elevation,
A mole,
Digging in a hole,
Digging up my soul now,
Going down, excavation

(Listed if other than Religion News Blog, or if not shown above)
Jonathan Petre, Religion Correspondent, Telegraph, Jan. 30, 2007, http://www.telegraph.co.uk