You are here: Home | After being gang raped by her village elders, Mukhtar fought back…

Isambard Wilkinson in Multan, Pakistan, hears the extraordinary story of an illiterate peasant woman who took on her village as well as the state.

Mukhtar Mai’s story is as horrific as it is simple, and it is quickly told. On June 22, 2002, the council of her tiny village, on the southern fringes of the Punjab in Pakistan, ordered that she be gang raped as a punishment for an offence supposedly committed by her 12-year-old brother.

At gunpoint she was taken into a stable. Her clothes were ripped off and she was violated by four village elders. The ordeal lasted about half an hour and, when it was over, she was dragged out, semi-naked, in front of all the village men. Her father covered her with a shawl and carried her home.

Mukhtar, who is also known as Mukhtaran Bibi, should then have killed herself. That was the custom. But such was her sense of outrage and injustice that she refused to commit suicide; and that act of defiance started a sequence of events that turned her into an international cause ce’le`bre, who was first praised and then condemned by Pakistan’s president, Gen Pervez Musharraf. 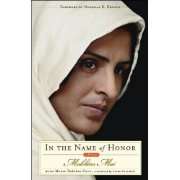 Mukhtar, an illiterate peasant, is an unlikely heroine. The crime committed against her is not uncommon in an area benighted by poverty, acts of brutality against women and the rule of thuggish overlords.

But she has refused to be cowed by the pressure put upon her, by local officials right up to the president, to end her campaign against the men who raped her. She wants them to be hanged. “I will never forgive them,” she said yesterday. “They must be punished according to the law.”

This week, she publishes the autobiography she dictated, In the Name of Honour, which will again stir up the controversy over all that has happened to her. It took some persuading to get her to tell her story, and for the slight, shy 35-year-old with a lazy eye and a rare but wheezy laugh, recounting the events of that night, five years ago, is still painful.

The first time Mukhtar realised that something was wrong was when her father asked her to go with him to the village mosque. Her 12-year-old brother, Shakur, had been accused of committing a “crime” – she didn’t know what – against a 20-year-old woman belonging to the local dominant caste, the Mastoi.

Mukhtar and her family are from the lowly Gujar caste and are expected to be subservient to the Mastoi. She thought that she was being asked, as a respectable woman, to speak to the village elders on behalf of her brother.

As Mukhtar, accompanied by her father, Ghulam Farid Jat, an uncle and a family friend, approached the mosque, she could see a large gathering of men outside. This was the panchayat, the village council.

What she didn’t know was that it had been taken over by the Mastoi men, who had resolved that to appease the honour of their caste, she must be raped in revenge for what they claimed was the rape of one of their women by Shakur.

“I never thought that anything could happen,” says Mukhtar. “I went there to apologise and come back home.”

She spread a shawl at their feet as a sign of subservience. Five men armed with rifles and a pistol threatened the Gujars.

The Mastoi leader, Abdul Khaliq, grabbed her arm, others pulled her hair and clothes and she was dragged into an empty stable.

On the beaten earth of the stable floor, Mukhtar was raped by four men: Abdul Khaliq, Gulam Farid, Allah Dita and Mohammed Faiz.

“It is not an incident that gives you any relief,” she said. “I still have pain.”

After the rape, she ignored death threats and pressed charges. A local imam denounced the attack at Friday prayers and the crime became national news, after the local newspaper reported his sermon.

In September 2002, the case was tried in a special anti-terrorism court. “I begged and pleaded with the rapists, but they were like animals,” Mukhtar told the court.

“One of them put a gun on my head while the others tore up my clothes.”

The four men were sentenced to death, along with two members of the panchayat. It transpired that the allegation against Shakur, was made up in an attempt to hide the fact that it was her brother who had been raped by men from the Mastoi caste.

Three men were later sentenced to three years in prison for that crime.

Initially, the Pakistani government lauded Mukhtar as a heroine; President Musharraf even handed her a ?4,500 gift. But when the case received publicity abroad and Mukhtar was asked to visit America to talk about her ordeal, the government put her name on Pakistan’s “exit control list”, which blocked her from leaving the country.

They were afraid that the case would give the wrong impression of Pakistan.

According to Amna Buttar, one of Mukhtar’s close circle, a friend of Gen Musharraf threatened her, saying that Pakistan’s intelligence services can “do anything.

We can just pay a little money to some black guys in New York and get people killed there”.

Asked about the ban, President Musharraf said she was being exploited by “Westernised fringe elements” who wanted her to “bad-mouth” Pakistan. He later said that the rape had become a money-making concern.”

“He is a great sardar [chief] and I am a peasant,” said Mukhtar. “But when they talk of me shaming the country, he should be careful, as he is also the son of a woman.”

In 2005, thousands of her supporters took to the streets to protest, after the death sentences against the rapists were overturned. However, that decision was quickly revoked by the Supreme Court, although it has still to issue a final judgment.

“Fate is in the hands of Allah,” says Mukhtar simply. Her own global fame is at odds with her modesty, and her ambition and affection remains focused on her village, despite all that has happened there.

“I have a routine of dealing with people continually. I don’t have a life of my own, as groups always come to the village.”

She has used her compensation money, along with international donations, to start two schools in her village and to run a charity to promote women’s development.

Mukhtar, who had been married at 16, divorced her husband after three years of unsatisfactory marriage. Now, since she attained fame (and a reasonable amount of money), she has received a dozen marriage proposals.

“I haven’t found a good person yet,” she laughed. “But I trust men. I am not against them.”

She may have achieved fame and more money than she could have dreamed of a few years ago, but her life is still in danger.

Just a few hundred yards from her family’s home is the large compound of the Mastoi. They have neither forgotten nor forgiven, and have threatened to kill her and her brother.

Chris Cork, an English development agency consultant who helps Mukhtar with her village projects, is convinced that the Mastoi will get their revenge. “They have said they will kill her one day. And they will. She has great courage and dignity. She never asked for fame.”

“What if you are killed?” I ask Mukhtar.

“I am just the first drop of water in the village,” she says quietly. “I believe it will rain after me.”

(Listed if other than Religion News Blog, or if not shown above)
Isambard Wilkinson, Telegraph, Jan. 29, 2007, http://www.telegraph.co.uk