You are here: Home | Cars defaced with religious-themed messages

Susan Heying, owner of Primitiva Gallery, says the religious-themed graffiti is strange. “It doesn’t seem like something normal that religious people would do.”

Declarations such as “Jesus died for sinners,” “Jesus loves you!” and “Jesus saves! Are you saved?” were sprayed in red and gold all over a pair of panel trucks behind the building at Jefferson Avenue and Fig Street, which is occupied by furniture and home decor stores. A white van out front also was hit. 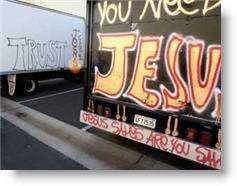 At Primitiva Gallery on Wednesday, the owner of the trucks, Susan Heying, announced, with a broad grin, “Jesus loves me!”

“It really is weird,” Heying said, explaining that she didn’t know what to make of the Christian-themed vandalism. “It doesn’t seem like something normal that religious people would do.”

Then again, she said, “They did a good job. It took them a long time to do that. They were really artistic.”

She said she isn’t taking the attack personally.

Heying said at least one Christian woman who came into the store since it opened in October objected to the merchandise — which includes bamboo, Buddhas, wicker, masks and tortoises among its conventional-style furniture and accessories. But it’s not as if she’s worshipping the accessories, Heying joked.

“I don’t consider them anything but beautiful pieces of art,” she said.

Most likely, the vandal didn’t know her store owned the trucks, which were unmarked, Heying said.

Kim Barriga, an interior designer at the neighboring Design House Furniture, said the complex has been hit with fire from paintball and BB guns in the past week.

Barriga said that as a Christian, she finds the graffiti disturbing. Even if the vandal was a youngster, it’s hard to believe that anyone who considered himself a Christian would choose vandalism as a way to spread the word, she said.

“They’re going to go to hell,” Barriga said under her breath, her eyes widening. “But I’m not judging.”