Their prophet, Warren Jeffs, is awaiting a criminal trial next April.

A court-appointed fiduciary is combing through the polygamist sect’s assets.

It might lead one to assume that the Fundamentalist Church of Latter Day Saints is on the verge of breaking apart.

But with this secretive group, the truth is often a mystery.

What is clear is that the sect’s 1,691-acre West Texas outpost near Eldorado appears to be thriving. 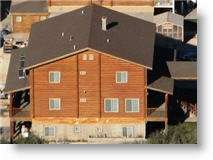 Homes on the FLDS Eldorado property. Photo from Eldorado FLDS

Buildings continue to be constructed.

Roads are being laid.

The county taxes were even paid early to get a discount.

It’s enough to convince some Eldorado residents that their town is going to be the church’s new home.

“I’ve never been convinced it was simply going to be a retreat like his followers said when they first came here,” said Randy Mankin, editor of the Eldorado Success.

“I think it’s going to be the new headquarters of the church for the simple reason that we’ve got the temple down here; the other places don’t.”

The sect’s historic base in Arizona and Utah is under intense scrutiny. A 2005 court order appointed Salt Lake City accountant Bruce Wisan as the special fiduciary of the United Effort Plan Trust that controlled the FLDS holdings in the twin cities of Colorado City, Ariz., and Hildale, Utah.

In the past month, seven homes have been abruptly abandoned, suggesting that more members have moved to FLDS outposts or have been excommunicated from the church.

“In the first year and a half of overseeing this trust, we were able to take control of six houses in the Colorado City/Hildale area,” Wisan said. “In the last two weeks, we have seen seven abandoned. We really don’t know what it means. This is a secretive group where even [Jeffs’] followers don’t know what’s going on.”

The investigation of the church trust, which didn’t even have a checking account until Wisan’s appointment, is unlikely to affect three outposts in Eldorado, Colorado and South Dakota.

“The funding for these outposts seems to be coming from in the FLDS church,” Wisan said. “These are very secretive people even among themselves. Warren has counseled them not even to tell their families when they go to places like Texas.”

Before his arrest in August during a routine traffic stop, Jeffs was on the FBI’s Ten Most Wanted Fugitives list. He is accused of arranging a marriage between a 14-year-old Utah girl and her 19-year-old cousin that took place in Las Vegas. He also faces criminal charges in Arizona, accused of arranging marriages between men and underage girls.

“Prior to Jeffs being arrested there was some tension,” Doran said. “Once he was arrested, the communications with them out there at the ranch improved.

That sum makes the FLDS one of the top 10 taxpayers in the county, where oil and gas revenue has historically been the top moneymaker, Sutton said.

“I think Jeffs is probably more effective in jail than he was on the run,” said Mohave County, Ariz., investigator Gary Engles, who works from an office in Colorado City.

At one time there were believed to be close to 10,000 followers in the group, and the population of Colorado City/Hildale was estimated at around 8,000. Now it’s far less, Engles said.

“I don’t think Warren has any intention of moving a lot of people to these other compounds,” Engles said. “I think he’s only going to keep 1,000 or 2,000 as members and probably excommunicate or leave everybody else behind. I think he’s done with Colorado City and Hildale.”

For Eldorado, that means an uncertain future.

The dire projections of the compound becoming another Waco have faded, only to be replaced with the sober realization that this polygamist group may become a permanent fixture in the sparsely populated county.

“I think the attitudes are mixed,” Mankin said. “Some people want them gone; some people want them left alone. Others are actually benefiting from trading with them. It’s not nearly as hysterical as it was when they first came here. It certainly looks like they’re here to stay.”

1890 – After the Church of Jesus Christ of Latter-day Saints rejects polygamy, some followers defy the church’s edict and continue to practice plural marriage.

1914 – Settlement begins in Short Creek, an Arizona town that becomes a home to polygamists.

1953 – Arizona officials raid Short Creek in an attempt to prosecute polygamy, but the move is criticized.

1961 – Short Creek is renamed Colorado City and grows across the border to include what is now Hildale, Utah.

1986 – Rulon Jeffs becomes the prophet of the fundamentalist sect.

2003 – David Allred, a member of the sect, purchases 1,691 acres of land in Schleicher County near Eldorado.

2005 – A Utah judge appoints Salt Lake City accountant Bruce Wisan as the special fiduciary of the United Effort Plan Trust that controls the church’s holdings in the Colorado City and Hildale area.

2006 – In June, Warren Jeffs is placed on the FBI’s 10 Most Wanted Fugitives list. He is arrested in August during a routine traffic stop outside Las Vegas.

(Listed if other than Religion News Blog, or if not shown above)
Bill Hanna, Star-Telegram, Jan. 1, 2007, http://www.dfw.com