Jay Bakker, Jim and Tammy Faye’s prodigal son, has come into his own as an alternative preacher, a pilgrimage chronicled in a Sundance Channel reality-TV series.

He has his mother’s eyes and his father’s chin, this son of America’s most infamous televangelists. Now Jay Bakker, 31, the pierced and tattooed progeny of Jim Bakker and Tammy Faye Bakker Messner, is making his own mark in the evangelical world with a streetwise ministry called Revolution that’s being chronicled in a Sundance Channel series.

“One Punk Under God” follows the younger Bakker’s personal and spiritual pilgrimage, which has more universality than one might expect given his one-of-a-kind childhood.

He has been deeply affected by his parents’ misfortunes and divorce and by the strange upbringing he shared with his sister, Tammy Sue Bakker Chapman, who also works in ministry. His father, brought down by a sex and fraud scandal, served time in federal prison in Rochester, then made something of a comeback with a humbler ministry with his second wife. His mother, who also remarried and had a second wind as a writer and pop-culture figure, is dying of cancer.

After a rough youth marked by rebellion and addiction, Jay got clean. His ministry style could not be more different from his parents’. They were shiny; he is rough. They were excessive; he is a minimalist.

Bakker, who is friendly and thoughtful, sprinkles his conversations with “Neat!” which, one suspects, he picked up from his mother, but otherwise his voice is his own. By phone from New York City, where he lives with his wife, Amanda, and preaches at a Brooklyn bar called Pete’s Candy Store, he talked about his faith, his parents and the show.

Q First things first: How is your mom doing?

A Not well. She started hospice care a couple months ago. The cancer is at Stage 4; it’s spread to her lungs. I’ve been spending a lot of time with her. We’re very close.

Q What’s your relationship with your dad like now?

A It’s gone through a big transition, part of which the show records. When one of your parents is dying, you tend to reprioritize. I hadn’t been seeing my dad much — it was one of those things where you slowly drift apart — but I recently reached out to him, and it’s really been neat. We relate now as grown men, even though we may not see eye to eye on everything.

Q What kind of guy is he?

A Everything that’s happened has been hard on him, but he’s doing better. He’s very forgiving, very quiet, sensitive and kind, but also a man who has some fears because he’s been so hurt. He’s very, very shy of the media. But he’s a seeker of truth, a man who truly wants to understand the word of God.

Q Your mom grew up in International Falls, and she and your dad met at North Central University in Minneapolis. Do you have Minnesota connections?

A Some aunts and uncles still live there, but I don’t see them often. But I love Minneapolis, I love the skyways. And the Mall of America! It’s the greatest place on Earth.

Q Tell us about your high school years.

A They were hard. My dad, of course, went to prison, and later my parents got divorced. The media were all over us. Kids picked on me. I got into fistfights in school [in Florida and Georgia]. I dropped out of high school. A few years ago I went back and got my high-school equivalency degree, which is neat, because now I can take college Bible courses. 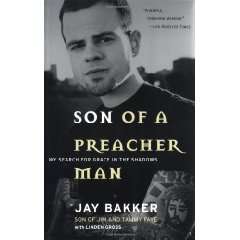 And yeah, I battled with drugs and alcohol, mostly alcohol. It was a very hard time. I got real disillusioned with the church. There’s nothing like going to church and hearing jokes about your parents. It was plain-out cruelty. Then the punk kids embraced me. I found a place with them.

Q How did you come to the ministry?

A Some friends were starting a church for punk rockers, skateboarders, that crowd, and they wanted me to be a part of it. The more I got into it, the more deeply I reflected on God’s message of grace. I realized that he loves us unconditionally. That changed my life.

Q How would you describe Revolution? Does it fall into the category of “emergent” church?

A Yes, it’s very close to that — a postmodern church, for sure. [Emergent-church pioneer] Brian McLaren is one of my heroes. I definitely consider myself part of that movement. I’m a great admirer of [Sojourners leader] Jim Wallis’ “red-letter Christians” [who emphasize a social-justice message derived from the words of Jesus, which in many Bibles are printed in red], of Tony Campolo and others of that ilk.

Q One of the major plot threads in “One Punk Under God” is your realization that you can no longer support exclusion of gay people from a full church welcome. How did that come about?

A I’d see how the church was treating gay and lesbian friends, and it broke my heart. I’ve studied the scriptures on this topic, and I don’t think it’s God’s intention to punish people for being gay. I just don’t see two people in a committed relationship as sinning.

Q “One Punk Under God” is marked by a lot of suspense. Will you follow your wife’s career from your Atlanta Revolution church to New York? [Amanda, his co-star in “Punk,” was accepted as a medical student at New York University.] Will Stu [Damron, a Revolution leader who is a conservative Baptist] keep supporting your ministry even though you preach that God loves gays just as they are?

A Well, I’m ministering in New York now, and Revolution is still going with me and Stu and the others, so I guess you know how some things come out. As for Stu and me, we’ve just agreed to disagree on the gay thing.

Q What’s been the reaction to the show?

A It’s been mostly positive. I think it’s really neat, if the show touches people in a positive way.

Q Did you come up with the show’s title?

A No way; Sundance did. I don’t know if a guy who’s 31 can be a punk. Revolution meets in a bar; I guess there’s a punk ethic there. But I don’t listen to punk music.

Q What do you listen to?

Q When you’re by yourself with a Bible, what passages do you often turn to?

A There are two staples. One is the part where Jesus is sitting at Matthew the tax collector’s house and his followers are asked, Why does your teacher eat with such scum? and Jesus stands up and says, Healthy people don’t need a doctor; sick people do, and rebukes the religious teachers for being so exclusive. And the other is 1 Corinthians 13, about love. That’s the core of it all.

Q What do you most want to say to people?

A I’d like to encourage Christians who disagree to talk to each other respectfully. When we get angry and yell, we lose ground and we fail to grow. The church should be a place where people can respectfully disagree, a place of love and forgiveness.