You are here: Home | Evangelical Christians make up nearly a quarter of the U.S. population

Evangelical Christians make up nearly a quarter of the U.S. population. But who are they, and what do they want?

In his new book Believers: A Journey Into Evangelical America, Jeffery L. Sheler tries to dispel stereotypes and paint a nuanced portrait of a faith group that, he says, is more diverse than one might think.

A former evangelical himself, Sheler, 57, seeks answers in American megachurches, on the campus of Wheaton College, in a Guatemalan village and in Washington, D.C. In the end, he discovers what he expected all along: Evangelicals are “extraordinarily normal.”

Sheler, a longtime religion writer and editor for U.S. News & World Report, lives in Portsmouth, Va. Here are excerpts of our phone conversation: 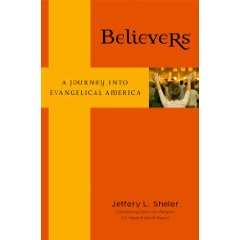 Question: What must one believe to be an evangelical?

Answer: The Bible is God’s word, completely reliable, without error. Jesus is the only savior, and one has to have a personal relationship with him. And because Jesus is the only way, evangelicals feel very strongly that they are commissioned by Christ to share their faith with others, to evangelize.

Q: You say evangelicals face “unfair and inaccurate stereotypes.” What are some of those stereotypes?

A: Evangelicals are perceived to be motivated by a primarily political agenda, which is not the case. Another stereotype is that all evangelicals think alike, act alike, vote alike. Another is that they are obedient followers of a handful of headline-grabbing preachers and broadcast personalities.

Q: Who are they really?

A: We’re talking about 60 million people. They are diverse. Evangelicals are not weirdos. They’re your next-door neighbor, the person who checks you out at the grocery store, your insurance salesman, a bank teller. They’re ordinary people.

Q: If evangelicals are just like you and me, why do some people fear them?

A: Because they hear and read the accounts of evangelicals in the media. I’m not faulting the media. You have a handful of evangelicals who are intemperate in their remarks. They have tremendous access to the airwaves. Reporters like to quote them, because they’re very quotable.

When people hear Pat Robertson say some of the things he says, or D. James Kennedy talk about “taking back America for Christ,” that sounds threatening.

Q: Do non-evangelicals have reason to worry?

A: I put this question to some highly influential evangelical leaders — James Dobson [founder of Focus on the Family], for one. I said, “People are suspicious of your motives. They wonder what you’re trying to do, what happens if evangelicals get their way?” He said, “Do we aim to turn this country into a theocracy? Absolutely not.”

Almost no one is serious about turning this into an official “Christian nation.” The best most of them hope for is that they’ll be so successful at converting people that someday the country will be Christian in its ethos and spirit, not in how laws are established.

Q: Traditionally, evangelicals weren’t active in politics. How did they become such a force?

A: Someone who votes every two years is not a political activist. That’s just being a good citizen. Evangelicals vote, and they vote predominantly Republican. But that’s not volunteering in campaigns or sending money to candidates.

But there are evangelicals in positions of power, starting with the president. They are a force to be reckoned with.

Evangelicals have come out of the woodwork in Washington. They have recognized that it does not serve them well to sit on the sidelines and bemoan the fact that in their view, the country’s morals are going down the drain.

Q: How influential are they?

A: All you have to do is look at where we are midway through the second term of an evangelical president. How many laws have been passed on the religious right’s agenda?

Abortion is still legal. Prayer in public schools is still not legal. Pornography is as ubiquitous as ever.

Certainly, evangelicals have influence, but the perception is far greater than the actuality.

Q: Then why should non-evangelicals care what evangelicals think? Why does your book matter?

A: A lot of people worry about this group. They wonder what they’re after, how powerful they are, what their designs are on this country.

I hope the portrait I’ve presented will cut through that fear, which is based, really, on caricature.

I’m not trying to polish the image of evangelical Christianity. I’m just trying to do what I’ve always attempted to do as a journalist: turn a light on in a dark corner, expose life for what it is.

(Listed if other than Religion News Blog, or if not shown above)
Sarah Price Brown, The Dallas Morning News, via Kentucky.com, Dec. 30, 2006, http://www.kentucky.com