You are here: Home | Jew, turned Muslim, and then Christian, offers knowledge of Al Qaeda

Many college students go through a spiritual crisis but rarely does it turn out as it did for Daveed Gartenstein-Ross, a Jew who converted to Islam and went to work in a small town in Oregon for a charity that has since been linked to Al Qaeda.

Gartenstein-Ross, 30, has now changed tacks again, converting to Christianity and using his background as a former Islamist insider to help the Federal Bureau of Investigation crack down on Islamist terror networks in the United States.

A rising star in the counterterrorism community, he testified before Congress in September about the dangers of radical Islamist indoctrination in U.S. prisons and the recruitment of potential terrorists among inmates. Senator Joseph Lieberman of Connecticut praised him as a key player in the government’s efforts against the U.S. arm of the Haramain Islamic Foundation, a large Saudi charity, that was shut down in 2004 by the U.S. authorities after the U.S. Treasury Department designated it a terrorist-supporting entity with ties to Al Qaeda.

Gartenstein-Ross describes his unusual journey in “My Year Inside Radical Islam,” a memoir of the nine months he spent with Al Haramain to be published in February. 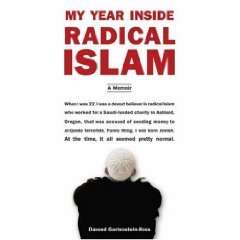 While a growing number of former terrorist operatives and counterterrorism officials are publishing insider accounts of their shadowy battles, Ross offers a troubling testimony on the lure of radical Islam for Westerners. This is not merely an academic proposition, since Western converts like him pose a major challenge to law-enforcement officials in their fight radical Islamist networks.

“I thought it was significant to tell people how a reasonably intelligent Westerner would work for a radical Islamic charity,” Gartenstein-Ross said in an interview, “and end up not being disgusted by it but actually feeling, ‘Wow! There is something to these guys’ ideas.'”

He said he had initially embraced a moderate version of Islam before being drawn to his job with radical Islamists in Ashland, Oregon, his hometown, seduced by the appeal of belonging to a close-knit community and the “ready answers” provided by his superiors.

Adopting Wahhabism, the Saudi rigorist interpretation of Islam, he stopped shaking hands with women, listening to music, wearing shorts, and playing computer games. He grew a full beard, endorsed the gay-bashing and conspiracy theories of his mentors, and found himself praying for the victory of mujahedeen, or Muslim holy warriors, around the world.

From that point, Gartenstein-Ross might well have followed the path taken by two other West Coast teenagers drawn to radical Islam: Adam Yahiye Gadahn, 28, who last month became the first American to be charged with treason in more than half a century for his role as a propagandist for Al Qaeda, and John Walker Lindh, now 25, who was sentenced in 2002 to 20 years in jail for fighting alongside the Taliban in Afghanistan.

“We all grew up in homes where answers were not given to us, and we were looking for a sense of direction that we initially found within Islam,” said Gartenstein-Ross.

Raised by “New Age Jewish” parents in Ashland, a small southern Oregon town infused with hippie culture and boasting a well-regarded Shakespeare theater festival, Gartenstein-Ross went to college at Wake Forest University, a conservative campus in North Carolina. He felt out of a place there until he bonded with a Kenyan-born Muslim leftist activist who inspired him with his moderate religious beliefs. He converted to Islam in 1997 during a semester abroad in Venice after meeting local Muslims whose free-flowing manner appealed to him.

The following year, just before graduating in communications, he was on a family visit home when he was recruited by a Muslim activist named Pete Seda to work for a local Islamic not-for- profit organization that had just received significant funding from Al Haramain and went on to become its American head office.

Gartenstein-Ross started work for the office in December 1998, running day-to-day operations and overseeing special projects. In one, a prison outreach program, Al Haramain handed out Wahhabist-annotated Korans to prisoners and maintained a database with the names and whereabouts of inmates who received the foundation’s material.

Islam / Islamism
Islamism is a totalitarian ideology adhered to by Muslim extremists (e.g. the Taliban, Wahhabis, Hamas and Osama bin Laden). It is considered to be a distortion of Islam. Many Islamists engage in terrorism in pursuit of their goals.
Adherents of Islam are called “Muslims.” The term “Arab” describes an ethnic or cultural identity. Not all Arabs are Muslims, and not all Muslims are Arabs. The terms are not interchangeable.
Understanding Islamic Terrorism: Muhammad, Islam and Terrorism
Read up on Islam
Read up on Islamism
Research resources on islam
Research resources on islamism

He was a true believer when he left Al Haramain amicably in the summer of 1999 to pursue a law degree at New York University. The change of setting and the lifting of the peer pressure helped him realize he had gone astray, he said. Resuming a relationship with a Christian girlfriend, who became his wife, helped prompt him to convert to Protestantism. The attacks of Sept. 11, 2001, then hastened his estrangement from leftist ideals.

After graduation in 2002, he clerked for Judge Harry Edwards at the U.S. Court of Appeals for the District of Columbia and worked briefly as a lawyer before deciding to work as a counterterrorism consultant.

He is now advising police departments and writing academic papers about Islamist terrorism. He has also become a regular commentator on Islamic and security affairs in conservative U.S. media, notably the Weekly Standard.

When Gartenstein-Ross testified before the Senate committee on homeland security and governmental affairs on Sept. 19, Lieberman told the panel that Al Haramain had been closed “in large part due to Mr. Gartenstein-Ross’s cooperation with the FBI.”

However, a law-enforcement source familiar with the case countered that he had been merely a “piece” of the puzzle and “definitely not some kind of star witness.”

Gartenstein-Ross declined to characterize his role but said that he had cooperated with law-enforcement officials in 2002, and then again after the charity was raided and its assets frozen in February 2004.

Al Haramain, which denies the allegations, was designated by Treasury as a terrorism-supporting organization in September 2004. Two of its officials – Seda, also known as Pirouz Sedaghaty, and Soliman Hamd al-Buthe of Saudi Arabia – were indicted in February 2005 for illegally funneling $150,000 to Islamic combatants in Chechnya. Both men are abroad and are challenging the charges in court.

Gartenstein-Ross insists that his latest conversion – religious and political – did not turn him into an enemy of Islam. One of his projects, he says, is to write a book about moderate Islam, the kind he initially embraced.

(Listed if other than Religion News Blog, or if not shown above)
Marc Perelman, International Herald Tribune, Nov. 27, 2006, http://www.iht.com