You are here: Home | How much fun can sex be before it’s a sin?

TORONTO, Nov 7 (Reuters Life!) – The United Church of Canada hopes an ad featuring a can of whipped cream and the question, “How much fun can sex be before it’s a sin?” will fill its pews as Christmas nears.

The country’s biggest Protestant denomination launched an advertising campaign on Tuesday meant to provoke debate on the “deep and persistent attitudes and images of organized religion.”

“In order to get past those stereotypes, we thought we needed an ad campaign that was different, had a head-snap to it, that people would have a second look,” Keith Howard, executive director of the campaign, said in an interview. 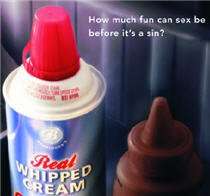 The C$10.5 million ($9.3 million) campaign targets 30- to 45-year-olds and rotates six images though December issues of Canadian magazines and newspapers as well as Web sites.

One asks, “Does anyone object?” to an image of two plastic toy grooms on a wedding cake. Another features a child sitting on Jesus’s knee in the traditional Santa’s village of a shopping mall, and asks, “Would you still take your kids?”

“We’ve had a long tradition of engaging the issues and concerns of the society that we are a part of,” Howard said.

The United Church of Canada has a declining active membership of about 573,000, although almost 3 million people have some sort of affiliation with the church. Between 1994 and 2004, membership dropped about 20 percent, according to church statistics.

• Press Release regarding the ad campaign