You are here: Home | UK: Passport photo of girl, 5, banned in case it offends Muslims

Hannah Edwards: This is the picture the local post office rejected.

A five-year-old girl’s passport application was rejected because it shows her bare shoulders and might offend Muslims.

Hannah Edwards’s mother Jane, a Sheffield GP, was told that her daughter’s exposed skin may be considered offensive in a Muslim country.

The photograph was taken in a booth at a local post office for a family trip to the south of France.

However, when the family presented it at the post office with the completed form, they were told it would not be accepted by the Passport Office. 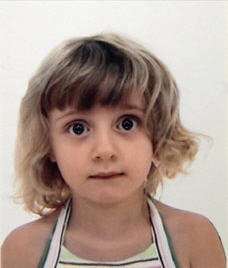 Hannah Edwards: This is the picture
the local post office rejected

Mrs Edwards said she was furious when a woman behind the counter said she was aware of at least two other applications that had been rejected because a person’s shoulders were not covered.

Mrs Edwards said: “I was incensed. I went back home and checked the form. Nowhere did it say anything about covering up shoulders. If it had, I would have done so, but it all seems so unnecessary.

“It is a total over-reaction. How can the shoulders of a five-year-old girl offend anyone? It’s not as if anything else was showing, the dress she wore was sleeveless, but it has a high neck,” she told the Daily Telegraph.

As a result, Mrs Edwards spent two hours taking Hannah for new pictures, filling in a new form and finding the necessary “responsible citizens” to endorse the photos.

“The people who had signed the original application were not available,” Mrs Edwards said.

“I had to chase around and eventually found a neighbour who was a teacher to sign the pictures.

“The passport office should set this sort of thing out in its forms if it is going to be so pedantic.”

A spokesman for the Identity and Passport Service said it was not its policy to reject applications with bare shoulders.

“Our offices have a Passport Office template which says what the photograph should and shouldn’t be. Bare shoulders don’t come into that at all.

“It is the first time we have heard of such a rejection and we will take it up with that particular office.”