You are here: Home | Dalai Lama honours Tintin the hero

Tintin will become the first comic strip hero to be honoured by a religious leader when the Dalai Lama presents the Truth of Light award to the Hergé Foundation, named after Tintin’s creator.

The award honours individuals and institutions that have made a significant contribution to the public’s understanding of Tibet. Hergé’s Tintin in Tibet, published in 1959, is the 20th in the classic series, and was said to be Hergé’s favourite.

“For many people around the world Tintin in Tibet was their first introduction to Tibet, the beauty of its landscape and its culture. And that is something that has passed down the generations,” said Simon van Melick, of the International Campaign for Tibet.

In the story, the young intrepid reporter Tintin and his companions, the blustering Captain Haddock and faithful dog, Snowy, go in search of Tintin’s Chinese friend, Chang, in the Tibetan mountains. “When I read it as a boy, I failed to appreciate the irony of Tintin desperately searching for his Chinese friend,” van Melick said.

Chinese forces invaded Tibet in 1959, forcing Tibet’s spiritual leader, the Dalai Lama, to flee to safety in India, where he set up a Government in exile in Dharamshala.

The Hergé Foundation was created in 1986 to guarantee the aesthetic quality of the works. In 2001, when Tintin in Tibet was published in China as Tintin in Chinese Tibet, it led to protests by the foundation and the Chinese withdrew the book from sale.

“It’s very effective and accessible for young people. It’s a wonderful vehicle for making them conscious of Tibet,” said Tempa Tsering, a spokesman for the Dalai Lama.

Hergé, whose real name was Georges Rémi, wrote the book when his marriage was collapsing. A psychoanalyst advised him to give up working on Tintin. Instead, he launched into Tintin in Tibet.

The Dalai Lama will present the award today in Brussels during a nine-day visit. Also being honoured is South African Archbishop Desmond Tutu for his work against apartheid. 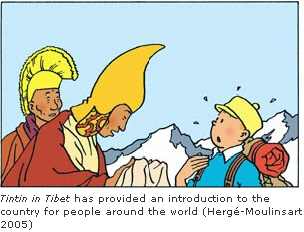 • The Belgian artist Georges Rémi created Tintin in 1929, writing under the name Hergé

• At least 120 million books have been sold in 45 languages

• Tintin has also appeared in a cartoon series and a radio serial. Last Christmas Tintin in Tibet was staged at the Young Vic Theatre in London

• Rémi continued to produce the comic while Belgium was under Nazi occupation. After the war he was repeatedly accused of collaboration

• Tintin himself was based on Hergé’s younger brother Paul. After they became estranged, Rémi drew the dastardly Colonel Sponz to resemble an older Paul

(Listed if other than Religion News Blog, or if not shown above)
Times Online, UK
June 1, 2006
Amrit Dhillon
www.timesonline.co.uk
, , ,