You are here: Home | Police use new Jeffs photo

State authorities are circulating a newer photo of Warren Steed Jeffs in hopes it may help lead to his capture.

Jeffs, president of the Fundamentalist Church of Jesus Christ of Latter Day Saints, is wanted by the FBI on an Arizona charge of arranging an underage marriage and unlawful flight to avoid prosecution. A flier issued by the FBI last August used a photo of Jeffs taken four or more years ago.

The new image is from Jeffs’ drivers license, which he renewed in 2004. He is wearing glasses and looks heavier. 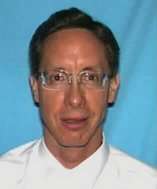 His last sighting is believed to have been in January 2005, when FLDS members in Eldorado, Texas, consecrated ground for a new temple. Prior to succeeding his father as FLDS prophet, Jeffs worked as an accountant and principal over the church’s private school in Sandy, Utah.

He has an estimated 10,000 followers in outposts in Utah, Arizona, Nevada, Idaho, Texas, South Dakota, British Columbia and other locales. The FLDS church adheres to the early teachings of LDS Church founder Joseph Smith, included the tenet of plural marriage. The LDS Church suspended polygamy in 1890.

There is a $60,000 reward for information leading to his arrest.