HACKENSACK, N.J. — Unlike a certain other religion in the news, the First United Church of the Flying Spaghetti Monster doesn’t object to cartoon depictions of the supreme being.

For one thing, He’s easy to draw — a tangle of pasta strands with a meatball body.

In some pictures, He is shown reaching out to confer the blessings of life and happiness with what church members like to refer to as His ‘noodly appendage.’

Flying Spaghetti Monster could be the next big thing on the pop culture menu. 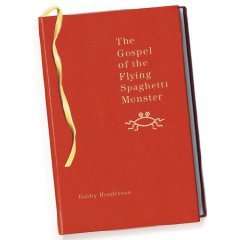 Read More About:
The Gospel of the Flying Spaghetti Monster
Buy From:
(Amazon.com USA)
(Amazon.co.uk UK)

His al dente visage can be seen on T-shirts, coffee mugs, magnets, flags, computer games. His Buitoni No. 10 tentacles can be seen reaching out to Adam in a photo-shop version of Michelangelo’s ‘Creation,’ and to the disciples in Da Vinci’s ‘Last Supper.’ ‘Flying Spaghetti Monster Bless America’ appears on bumper stickers.

He’s even getting his own Bible: The Gospel of the Flying Spaghetti Monster, coming from Random House. It’s written by his foremost prophet, Bobby Henderson, who launched this satiric dig at so-called intelligent design about a year ago, and lived to see it take on a life of its own.

“It’s amazing that a satirical monster could get this big, but then He did create the universe,” says Dee Dee McKinney, content administrator for the FSM online discussion forum and the reclusive Henderson’s primary mouthpiece.

Henderson, a 25-year-old physicist and graduate of Oregon State University, conceived of the Flying Spaghetti Monster last year as a reductio ad absurdum of the intelligent design argument for inclusion in curriculums.

According to intelligent design boosters, since evolution is only a ‘theory’ and not provable, an alternative — that the universe was created by an intelligent designer – should be given equal time in science classes.

The ‘alternative’ they presumably had in mind was Christianity.

But, said Henderson to some chums over beers, by the same logic the ‘intelligent designer’ could just as easily be, say, a Flying Spaghetti Monster.

It was only a short step to what happened next.

Last summer, as the Kansas School Board was having a heated debate over whether information about intelligent design should be required in public school curriculums (in November, the board voted 6-4 in favor), board members received an odd letter:

“Let us remember that there are multiple theories of intelligent design,” it read in part. “I and many others around the world are of the strong belief that the universe was created by a Flying Spaghetti Monster. It was He who created all that we see and all that we feel. … It is for this reason that I’m writing you today, to formally request that this alternative theory be taught in your schools, along with the other two theories.”

Members of the Dover, Pa., school board, voted out of office in November for supporting a measure similar to Kansas, also heard from the Spaghetti Monster.

But Henderson didn’t stop with letters. He also created a Web site, venganza.org, as a rallying place for what were quickly dubbed ‘Pastafarians.’ While there are officially 3,332 ‘church’ members worldwide, based on online response, the real number is doubtless much higher, McKinney says.

“We got one e-mail from a guy from Italy, who speaks almost no English, who wants to start a European seminary to train priests for the Church of the Flying Spaghetti Monster,” McKinney says. “The fact is, we don’t have a priesthood. Our church is a very bottom-up structure.”

Some Pastafarians are just people looking for the Next Big Quirky Thing — the kind of free spirits who gravitate to things like the Church of the Subgenius or the Church of Stop Shopping.

Others are students — sincerely troubled by the rise of fundamentalism and its impact on education.

“I think it’s a brilliant concept, and I’ve been trying to promote the idea,’ says David Linley, a 15-year-old high school student who discovered the Web site in October.

“I’ve just been disgusted by some of the pseudo-science I’ve seen,” Linley says. Finding the site, he says, was a “wake-up call.”

In addition to keeping tabs on the anti-science right and hawking various Flying Spaghetti Monster paraphernalia, the site also lampoons the kind of pseudo-science, bolstered by dubious charts and graphs, favored by creationists in books like Of Pandas and People.

One favorite chart purports to link the rise of global warming with the decline of pirates. Which explains the ‘pirate’ iconography — eye patches and cutlasses — that goes hand-in-noodle with the church’s spaghetti-and-meatball motif.

Naturally, the Web site gets plenty of hate mail from the devout. “You’re an idiot. I’ll pray for you,” one message read.

“They send Bobby threatening letters, they curse him, they call him a blankety-blankety-blank-blank,” McKinney says. “And at the end, they say God loves him.”

Most people – pro and con – assume that the Flying Spaghetti Monster is the creation of atheists, or at the very least agnostics.

Actually, McKinney is a Christian, and Henderson won’t say one way or the other.

“It’s appalling what has been done and what has happened to my religion in the name of politics,” McKinney says.

With the money from the Spaghetti Monster book, McKinney says, the ‘church’ is planning its major investment — a pirate ship that can go from port to port, spreading the word about His Noodleness.

“It would go from place to place, so (church) members could come to visit,” McKinney says. “And they’re hoping to make cannons. Some say it should fire T-shirts. The other half say it should be meatballs.”

(Listed if other than Religion News Blog)
The Record, via KansasCity.com, USA
Mar. 18, 2006
Jim Beckerman
www.kansascity.com