Kiffany Griffin knows the feeling of standing terrified, confused and nervous in a busy courtroom, facing a judge and her abuser.

It is stories like Griffin’s that have prompted a group of volunteers from the National Council of Jewish Women to recommend — for the second time in a decade — the creation of a separate domestic violence district court that they say would increase offender accountability and produce better care for victims.

The volunteers have been monitoring domestic violence cases in Jefferson District Court for years, as part of a program called Court Watch. Their recommendation has the support of domestic violence outreach groups, Louisville Metro Police Chief Robert White and County Attorney Irv Maze.

Court watchers are “very concerned about victim safety and perpetrator accountability,” said Connie Fox, one of the founders of Court Watch. “We don’t think that either is being addressed by district court right now.”

About 5,000 domestic violence cases were heard in district court last year, mixed in with about 40,000 felony/misdemeanor cases, according to the county attorney’s office.

That often leaves victims and defendants sitting together in cramped quarters as they wait for their cases to be called. Sometimes the delays lead to one or more of the parties leaving before their case is called, according to studies done by Court Watch.

The Court Watch recommendation includes separate waiting rooms for each side, cases going before a single judge every time they are heard, and a staggered docket so victims do not have to wait so long.

Court Watch began in 1995 with about 75 volunteers who each went to court once a week for three hours. Information gathered by those volunteers was used for an initial report and proposal in 1999.

They got close to seeing establishment of a domestic violence court in 2000. But a pilot program never got started after Kentucky Chief Justice Joseph Lambert suggested to Jefferson District Court judges that they first start a center to help victims of domestic violence.

The center, which was opened in 2001 in the Hall of Justice to help victims start legal proceedings and refer them to social service agencies, helped 4,729 people last year.

Another group of volunteers, including new ones from the University of Louisville law school, began going to court regularly again in early 2004.

That prompted another National Council of Jewish Women study, released in October, that also calls for a separate court, which Fox and her co-founder, Diane Graeter, say would increase accountability.

They say judges would better be able to monitor defendants to make sure they have completed the punishments or treatment ordered by the court. 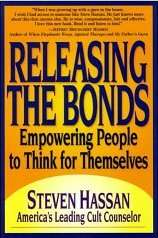 In addition to those seeking to rescue a loved one from a cult, Releasing The Bonds will help those who want to recognize the signs of a destructive relationship, and those who want to protect themselves and others from manipulation and abuse

“The time is ripe for all of us to look at how to best handle these cases,” Martin said. “It deserves a different focus … a different approach.”

And it frustrates her to watch.

“I don’t know how you throw all these cases in and you give the same importance to someone who has stolen a loaf of bread from Kroger … and someone who has been beaten up,” Shapiro said.

Chief District Judge Donald Armstrong said he’s in favor of a domestic violence court but isn’t sure if a totally separate docket is on the horizon yet.

“It’s logistically difficult to do because of the number of cases,” Armstrong said.

Judges also worry about burnout by the judges hearing the domestic violence cases, which are often emotional.

Separate domestic violence courts exist in many forms throughout the country.

The earliest were established in the early 1990s, said Sharon Denaro, who works in the Miami-Dade County system and has consulted with Louisville before.

“Those communities that have a domestic violence court … that just strengthens the community’s response,” Denaro said, adding that the courts provide consistency in response, better accountability and a better chance of getting help for victims and offenders.

One alternative suggested in Jefferson County would create a docket to monitor offenders after they have been found guilty to make sure they get treatment and fulfill their punishments.

One on One Cult
“The first time I saw the parallel between my own experiences in the cult of Scientology and battered women was when I was reading “Captive Hearts, Captive Minds,” which is an excellent book. It was in the Intro or maybe the first chapter that they cited and quoted the singer Tina Turner who had been in an abusive relationship for something like 10 or 15 years. She remarked how being with Ike Turner was like being in a small cult. The remark jumped off the page at me.” […more…]

“This … is a first step and sometimes we have to take small steps to enact change,” Armstrong said, although no decision has been made. It’s unclear what, if any, additional funding would be required to set up a domestic violence court.

There is no time frame for deciding on changes, but Court Watch members vow they will continue to push for them.

“We have such optimism for a better system,” Shapiro said. “I have to believe it’s going to happen. I would hate to think that we’ve wasted all these years.”

You may be in an abusive relationship if your partner:
• Tries to control what you do, who you see or talk with, or where you go.
• Takes your important documents or money, makes you ask for money or won’t give it to you.
• Slaps, pinches, shoves, hits, kicks, punches or restrains you against your will.
• Intimidates you with a weapon.
• Acts as if any abuse is not important, says it’s your fault or denies doing it.
• Says you are a bad parent, threatens to take away or harm your children.
• Threatens to kill you.
Source: Center for Women and Families

(Listed if other than Religion News Blog, or if not shown above)
The Courier-Journal, USA
Mar. 6, 2006
Jessie Halladay
www.courier-journal.com
, , ,