MEXICO, Maine –A Maine woman who discovered an image of the Virgin Mary on a blackened wall following a weekend house fire says she plans to rebuild the dwelling and cut out the image so she can put it on display.

The image was declared off-limits to visitors after Veronica Dennis followed her insurance company’s instruction to board up the house out of concern for the safety of people entering the fire-damaged structure.

Dennis’ home caught fire Sunday morning after a space heater in her daughter’s bedroom ignited a bed and a nearby dog bed. The image was revealed when she removed a framed painting from the kitchen wall, which was blackened by smoke and fire.

Dennis expressed concern that visitors looking to view the Virgin Mary image could turn her home “into a three-ring circus” and she was adamant that she has no intention of selling the property she has owned for 11 years.

“This is my house,” she said. “My neighbors wouldn’t appreciate it either if I sold the house and they turned it into a shrine. I will rebuild the interior, and, the image that’s on the wall is on paneling, so I will cut it out, and it will remain in the house,” she said. 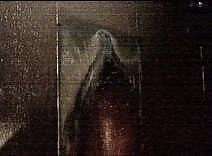 Police and neighbors who have been keeping watch on the Burton Street home said they saw no unusual activity after news of the image spread through the media, including The Associated Press, which transmitted a Sun Journal newspaper photo around the world.

“This neighborhood’s good at watching, and, I told (Dennis) I would keep an eye on the place,” said Marlene Gile, who lives next door.

Gile said viewing the image led her to believe that it could be message from a higher being.