You are here: Home | Witness to a ‘cult’

After keeping her journal hidden in the floor for years, Golden resident Brenda Lee said writing a book about a painful childhood in a religious “cult” was a harrowing but therapeutic process.

Lee, author of “Out of the Cocoon: a Young Woman’s Courageous Flight from the Grip of a Religious Cult,” has lived in Golden for 20 years.

She said when she was 9 years old, her mother joined the Watch Tower Bible and Tract Society, also known as the Jehovah’s Witnesses, in a small town in Pennsylvania and told her she was no longer allowed to associate with other members of her family.

“It really is a very destructive organization,” Lee said. “… As a 9-year-old I spent 40 hours a week in religious instruction. That was all I was allowed to do. When my mother decided to join, I was told I would never see my cousins again.”

Lee acknowledged the Watch Tower Society is not universally recognized as an organized cult but said her experience in the organization fits all the criteria of a “religious cult.”

“You’re taught to hate the world, to see everybody else as being led by Satan — that we are the one and only right religion and to question or defy that is turning your back on God,” she said.

Watch Tower representatives didn’t respond to allegations about the organization being a cult.

However, other former Jehovah’s Witnesses have written several books similar to Lee’s. Diane Wilson published “Awakening of a Jehovah’s Witness: Escape From the Watchtower Society“, in 2002, describing similar circumstances surrounding the difficulty of leaving the organization.

Lee said she was mentally abused by the organization and said the group preyed on her fears to keep her involved. 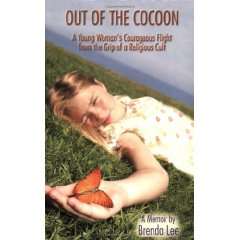 “They tell you that you will be ex-communicated if you ever decide to leave and that your family will not be able to talk to you — I haven’t spoken with my mother for over 25 years,” she said.

Lee’s book recalls the daunting environment in which she lived as a child and the disappointment she faced when she tried to reach out to a teacher for help to no avail.

“I started my book with a story I wrote when I was 12 years old about the frustrations I had when my mother joined the cult,” she said. “It was this short story. I was hoping someone would hear my pain and help me out. I wrote it for my teacher. It was a pretty brutal story that was pretty graphic about my distress and suicidal thoughts. My teacher gave me an ‘A’ rather than hearing I was trying to reach out for help.”

Finally, Lee said, she reached out to a friend at school.

“My aunt was visiting from Colorado Springs one day – my mother was tying to indoctrinate her into the cult – and she asked me how I felt about living there and I started to crying and told her I was suicidal,” she said. “… I would give letters to a girl at school and asked if she would send them (to my aunt) and we did that for the next nine years.”

Lee said when she turned 18 she moved to Colorado but still faced troubling times.

“I ate out of garbage cans for three months,” she said.

But after overcoming so much adversity, Lee put herself through college, was married and had a son. Though Lee is now divorced, she said her only regret is that she can no longer communicate with her mother, sister or nieces and nephews.