You are here: Home | When just one church isn’t enough

COLORADO SPRINGS, COLO. – At 11 a.m. on a recent Sunday, Emily Hoogenboom, 14, was at church, her second that morning.

First, she dutifully sat through a staid worship at Forest Ridge Community Church, which she attends with her family. Now she was with her 17-year-old friend and 4,000 other worshippers at an evangelical megachurch listening to six singers backed by a band and a swaying choir of 250 people.

Like Emily, a number of Christians are regularly attending different churches in the course of a week or a month, picking and choosing among programs and services, to satisfy social and spiritual needs. They are comfortable participating not only in multiple churches, but also occasionally in multiple faiths.

The practice is particularly pronounced among young people. Everyone in a family may attend one church for a service on Sunday, but the children then go their own way to youth groups, for example. In a survey of 13- to 17-year-olds conducted from 2002 through 2003, the National Study of Youth and Religion found that 16 percent of respondents attend more than one religious congregation. Four percent attend youth groups outside their congregations. 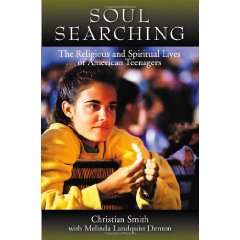 Some critics, particularly conservative evangelicals and the ministers of various denominations, decry such practices as a consumerist approach to faith. But sociologists of religion say it is a growing practice, a reflection of how Americans today are less attached to a historical, family denomination.

Parents also want their children to have an “authentic” relationship to faith, and “if you don’t choose it, it’s not authentic for you,” said Christian Smith, a professor of sociology at the University of North Carolina and director of the survey on youth and religion.

Emily and her parents, who are evangelical Christians, say her decision to attend the megachurch, New Life, reveals the strength of her faith and the profoundly individual spiritual course each believer follows.

It remains unclear how many Christians attend several churches regularly. Most youths who go outside their family church are Protestants, from mainline denominations and evangelical churches alike. Some are from mixed-religion marriages, Smith said, but many go simply because a second church appeals to them.

“We see it all the time, everywhere,” said Jose Zayas, director of teenage evangelism for Focus on the Family, a conservative Christian group based in Colorado Springs. “They gravitate to where they feel a connection. They’re more pragmatic than their parents’ generation. They look at what works for them. I think it’s healthy.”

At New Life, led by Ted Haggard, president of the National Association of Evangelicals, the youth-group sessions feel like rock concerts: T-shirts are on sale outside, and bands are onstage, grinding their way through screaming songs of praise for Christ while youths dance before them. Friends often lead other teenagers to new churches, said sociologists and adolescents themselves.

Though Emily’s family had attended New Life when she was in grade school, she visited the church again in junior high at the invitation of a friend, largely because Emily said she was unhappy with the popular but catty girl she had become. She stayed because the youth pastor’s sermons made sense to her.

“That was just the biggest thing for me: that you don’t have to be perfect, that God loves you not for what you do and for this body that we have only for a short time, but for your heart and soul and who you are inside,” Emily said of what she had heard.

“Every time I went to church,” she continued, “I felt God loved me, that I don’t have to worry about sin because he forgives me. So I looked forward to going back. I don’t really understand all of it. But I have the passion to learn more.”

Many children in evangelical families also see the example their parents have set, leaving the denominations they grew up in to embrace evangelical Christianity as young adults.

“I left the church of my upbringing to find Christ on my own,” said Chad Wight, whose 15-year-old daughter, Hannah, attends Pulpit Rock Church here with her family, but also goes to a youth group at Woodmen Valley Chapel, both nondenominational evangelical churches.

Wight said his family looked for a church that would nourish his children.

“Their spiritual health is really important right now,” Wight said, “and if they continue their walk with the Lord, that’s crucial.”

Parents largely accept their children’s choices, as long as the other churches espouse a similar theology, said Nancy L. Eiesland, associate professor of sociology of religion at Emory University’s Candler School of Theology. “Many of them are happy their kids will go to anything in their teenage years,” Eiesland said.

As a hub of evangelical Christianity, Colorado Springs offers many churches that preach similar doctrines, like the inerrancy of the Bible and the need for a personal relationship with Christ. But here and elsewhere, many devout Christians, especially clergy, take commitment to a particular church very seriously.

“If families spread their loyalties around, it’s been my experience that they don’t benefit as well as they could,” said Peter Beringer, a youth pastor at Pulpit Rock Church, which has about 1,000 adults in attendance every Sunday. “They don’t seem to have relationships in the church that are as deep. From what I have seen of students who have done this, they find it easier to disengage and be the kid on the fringes.”

Hannah Wight, a soft-spoken girl who deliberates over her words, stands by her choice. She said she felt more connected to Woodmen Valley after attending a series there that helped kids discern their “spiritual gifts,” like the desire to serve.

“The message spoke to me a lot,” Hannah said. As for attending two churches, she said, “It’s not hard for me at all because I feel like my needs are being fulfilled.”

Still, her parents said, people note Hannah’s less-than-regular appearances at the family’s primary church, Pulpit Rock. And her 13-year-old brother, Brian, does not understand her decision.

“I will defend her when necessary, but overall I’m on their side,” Brian said, referring to how others at Pulpit Rock have reacted to Hannah’s choice. “I don’t know why she has to make things inconvenient for the rest of us or why she picked that church when she has been going to Pulpit Rock as long as the rest of us.”

Emily Hoogenboom said she went to Forest Ridge largely out of respect for her parents, whose friends founded it about five years ago. But when Emily steps into New Life, she embraces a second family. Other youths come and hug her. They hug all the time, boys and girls showing affection for one another without risking trouble.

One Wednesday evening, boys in thrift-store jackets and porkpie hats, pale Goth devotees and petite girls with the same mascara, lip gloss and tight, flared jeans, about 250 teenagers in all, streamed into New Life for their youth group. By the hall entrance, Chad Fritzsche, 17, and Esther Saforo, 15, two of Emily’s friends who also attend New Life on their own, were playing guitar and singing songs they had written.

Youth pastor Brent Parsley entered on a sleigh dressed as a hip-hop Santa. “I’m going to break it down for you, Clarence,” Parsley told an actor in the Christmas play. “Christmas ain’t about presents, yo! The true meaning of Christmas is my main man: J.C.”

At this unbuttoned church, teenagers channel the roiling passions typical of their age into devotion. And Parsley egged them on. He told them in an overcaffeinated tempo that God has much in store for them. He reminded them that David was young when he slew Goliath and that Mary was probably quite young when she bore Jesus.

“God loves to use young people. I want all of us to live our lives as if God had something extraordinary planned for us,” he said. “Don’t dream small.”

(Listed if other than Religion News Blog, or if not shown above)
New York Times, via the Houston Chronicle, USA
Jan. 6, 2006
Neela Banerjee, New York Times
www.chron.com
, , ,