You are here: Home | Textbook aims to teach Bible with no religion

As lead attorney for the American Jewish Congress, Marc Stern has been at the forefront of keeping religious activities out of public classrooms. But now he is singing the praises of a new textbook to introduce public school students to the Bible and its influence on culture.

“I think they’ve done a very good job, and surprisingly so. It is very difficult to write a neutral textbook about something as freighted with meaning as the Bible,” he said.

If “The Bible and Its Influence” is used as recommended by its publisher, there will be no grounds to sue, said Mr. Stern, who critiqued early drafts.

“Unless you believe that the Constitution requires that school districts teach the Bible only from the viewpoint of the most extreme biblical criticism, I don’t see any plausible challenge to this textbook,” he said.

“The Bible and Its Influence” is intended to introduce high school students to the Bible and show its impact on literature, art and social movements. It delves into biblical references in Shakespeare and “promised land” imagery in the Rev. Martin Luther King Jr.’s “I Have a Dream” speech. It can be used for an elective course or to supplement English or social studies.

Its editors argue that it is impossible to understand Western culture without knowing the Bible. They cite a guide to the Advanced Placement literature exam in which 60 percent of allusions were biblical, including “cast the first stone” and “Lot’s wife.”

“This is not about religion. It’s about understanding a book that has influenced Western civilization more than any other book,” said Chuck Stetson, chairman of the Bible Literacy Project, which produced the book.

Although many people think the Supreme Court banned the Bible from public schools in 1963, it banned only classroom devotional reading, he said. The decision stated, “Nothing we have said here indicates that … study of the Bible or of religion, when presented objectively … may not be effected consistently with the First Amendment.”

Early drafts were critiqued by scholars across the breadth of Christian and Jewish traditions and by experts on church-state law. Its list of Hebrew Scriptures shows the Jewish, Catholic, Orthodox and Protestant canons. Miracles are neither affirmed nor denied, only described.

Where there are wide differences over interpretation, such as Isaiah 53 on the “suffering servant,” the text gives all sides:

“In general, Christians see in the servant songs a specific foreshadowing of Jesus and his sufferings,” the book says. 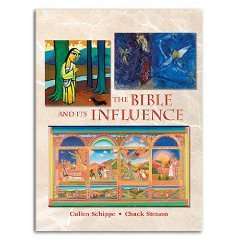 Revelation, the most difficult and disputed book of the New Testament, gets three chapters. One of many “cultural connections” boxes examines themes from Revelation in the “Battle Hymn of the Republic.”

Every chapter offers students a choice of projects. In Revelation, they can research its imagery in popular culture, including novels, movies or television, or collect artistic interpretations of images in the book.

Mr. Stetson, who founded the Bible Literacy Project, is counting on good sales of the book, which costs $67.95 for a single copy but less for schools. Inquiries are coming in, he said, although textbook approval procedures will delay purchases until 2006.

“We’ll be judged by the marketplace,” he said.

A venture capitalist by trade, he put his own money into the $2 million required to produce the book. It was self-published under the editorship of Cullen Schippe, a former vice president of Macmillan/McGraw-Hill.

Mr. Stetson, 59, an Episcopalian from New York City, started the project after his father urged him to use his skills to promote knowledge of the Bible. Surveys showed that 67 percent of Americans wanted students to gain a basic knowledge of the Bible and its impact on society, but fewer than 10 percent of public schools offered such teaching. In the business world, such disparity between demand and supply is almost unheard of, he said.

He had funding from the John Templeton Foundation, which promotes conversation between faith and science. But the book avoids the creation debate.

“This book is really focused on English and social studies. Science is different, and we stayed out of it,” Mr. Stetson said.

The text says: “Some read Genesis as a literal account of the mechanics of creation. Still others read it as a poem about God’s relationship with humans. Many read the book as both.”

The book gives little attention to scholarly debates over the authorship of the Bible, and it doesn’t delve into historical accuracy.

He likes the book.

“The main reservation I would have is that it probably spends more time on American literature and U.S. history than actually on the Bible,” he said.

It got rave reviews from teachers and students who participated in a pilot program for teacher training and classroom use last year in the Pacific Northwest.

The editors “really went out of their way to make connections to modern times through music and literature. The kids really liked seeing those connections,” said Stuart Rowe, an English teacher at Prairie High School in Brush Prairie, Wash. He was drafted for the pilot because he had taught a similar course. He found the new book a vast improvement over the text he had used, and has asked his school to buy it.

“They present the material in an unbiased way. It takes all of the pressure out. You don’t have to worry about what you are teaching. If a school is considering teaching a course [on the Bible], this is definitely the book to use,” he said.

There does not appear to be a push to use it locally. Some local teachers said they saw a need to teach students about the Bible, but feared lawsuits.

“I don’t think people are averse to having references to the Bible and including that in the curriculum, but they are wary about how exactly that would fit and the pressure that would come down on them if they were to teach it and a student complained,” said George Savarese, who teaches history at Mt. Lebanon High School.

Charles Haynes, senior scholar at the First Amendment Center in Arlington, Va., is often the first person school administrators call for advice on church-state dilemmas. In 2000, he brokered an agreement between groups as diverse as the National Association of Evangelicals, the American Jewish Congress, People for the American Way and the National Education Association on appropriate use of the Bible in public schools. “The Bible and Its Influence” was tailored to those guidelines.

“No textbook is perfect, and I’m sure there will be something that people will pick up that the rest of us missed. But whatever the motive of the Bible Literacy Project, their process has been absolutely to get this right,” Dr. Haynes said.

To help schools’ use of the book, the Bible Literacy Project has arranged online teacher training through Concordia University.

Dr. Leland Ryken, an English professor at evangelical Wheaton College, was one of the instructors for the pilot teacher instruction course last year.

“I haven’t taught such an enthusiastic class for a long time. It was very rewarding,” Dr. Ryken said of 30 public school teachers who tested the book. Most used it in English or social studies classes.

Biblical illiteracy isn’t confined to unbelievers, he said. When one of his Wheaton colleagues surveyed evangelical church youth groups, he found “a very low rate of biblical literacy.”

He found the book more respectful of the biblical text than many seminary textbooks.

(Listed if other than Religion News Blog, or if not shown above)
Pittsburgh Post-Gazette, USA
Oct. 24, 2005
Ann Rodgers
www.post-gazette.com
, , ,