The 81 ornately inscribed signatures he forged ranged from Abraham Lincoln to Billy the Kid, Emily Dickinson to George Washington.

But for Mark Hofmann, the real money was in Joseph Smith, Martin Harris and other figures from the history of The Church of Jesus Christ of Latter-day Saints.

In seven years, Hofmann went from a struggling Utah State University pre-med student in 1978 to a 30-year-old document dealer making millions of dollars traveling all over the country, meeting with renowned historians, even the leadership of the LDS Church — and selling them fakes.

His motives were twofold: money, and chipping away at the LDS Church he had lost faith in during his early teens.

He still went on a church mission, during which he spent some time playing at bomb-making.

But it all ended in 1985 when his bombs started going off in Salt Lake City.

Three exploded in total, set by Hofmann to thwart whistle-blowers about to cut him off before he could make his biggest score of all — forging the lost 116 pages of the LDS Church’s Book of Mormon.

“Hofmann decided as a young man he was going to destroy Mormonism,” said Gene Sessions, chairman of the Weber State University history department. “If he had come up with the lost 116 pages it would have sent shock waves through the church.”

Oct. 15 marks the 20th anniversary of Hofmann’s bombs. The third went off accidentally Oct. 16, critically injuring Hofmann before he could deliver it.

He is serving a life sentence in the Utah State Prison, and narrowly avoided the death penalty.

“He changed the entire profession of forgery,” said George Throckmorton, a Salt Lake forensic document detective who helped bring Hofmann to justice. “He’s still the best. I don’t like to use the word greatest because he’s a murderer. But twenty years later no one has passed him.”

Throckmorton and his contemporaries are still incredulous at Hofmann’s abilities, his diversity, his attention to detail:

• Hofmann spent two years studying the “linguistic syntax” of the Book of Mormon, numbering each word in a code to document speech patterns of every speaker in the Scripture.

• Hofmann would sell a forgery to Person A, then buy it back and sell it to Person B, saying he bought it from person A. The price had risen because the document had a pedigree.

• He would often take a legitimate historical find and tamper with it to increase its value. He bought a Jack London first-edition “Call of the Wild” for $1,000 and sold it for a quick $5,000 when he added London’s signature and a note to the book’s canine hero.

• When he turned to making bombs, he covered his tracks by purchasing his parts from electronics stores in four states.

Hofmann’s most famous forgery, the “white salamander letter” he claimed was by early church member Harris, described a threatening reptile guarding the Golden Plates church members believe were the source of the Book of Mormon. The letter was one of many Hofmann works the church had obtained.

It would have been used to authenticate Hofmann’s coming bestseller, a forgery of the lost 116 pages lost by Harris on a trip to verify the translated pages’ veracity. 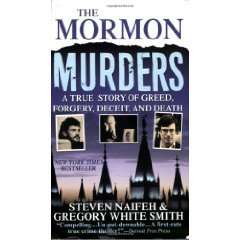 The salamander letter was particularly valued at the time because no other example of Harris’ handwriting exists, Sessions said.

“That’s called salting the mine,” Throckmorton said of the salamander letter. “Spreading nuggets in a played-out gold mine in order to sell the whole mine.”

The 20th anniversary of the bombings will be marked by a conference next weekend in the Red Lion Hotel in Salt Lake City, introducing a new generation of forensic document examiners to Hofmann’s forgeries.

Document examiners from 31 states are expected, with 112 preregistered as of Thursday, including the 50 members of the conference sponsors, the Southwest Association of Forensic Document Examiners.

The four-day conference, beginning Friday, with only one day open to the public, will include Hofmann’s prosecutors and many of the investigators.

Throckmorton is a headliner and will also be debuting his long-awaited book on Hofmann at the conference. The book will be released in the next few months.

Sessions will speak about the impact — both good and bad, nationally and internationally — Hofmann has had on history.

“The Hofmann scandal has caused us to be much more careful, much more skeptical of historical finds that seem to come out of nowhere,” Sessions said. “Historians tend to be anxious to be revisionists and Hofmann played right into that.”

But his machinations have also cast doubt on a lot of legitimate historical finds, even today, Sessions said. “There is no question that there are many people out there who won’t admit they have a document they bought from Mark Hofmann.”

Fakes still out there

As recently as February, Throckmorton said, he received a book autographed by LDS Church founder Joseph Smith. He had to inform the owner it was a Hofmann forgery.

A month earlier, he had the same bad news for the owner of a letter purporting to list what was taken out of church leader Smith’s and his brother Hyrum’s pockets after the two died in the Carthage, Ill., jail.

Twenty years, A.J. Simmonds, USU special collections archivist, recalled long conversations with the young Hofmann, then a pre-med student and document hobbyist, on church history and historical artifacts. Hofmann related to him his bomb-making experiments on California beaches while on his LDS mission.

Simmonds remembered Hofmann talked about what police later confirmed: At the time the bombs went off, Hofmann was in the middle of forging the lost 116 pages of the Book of Mormon in his basement laboratory. Simmonds has since died.

Simmonds came to learn he was one of many of Hofmann’s dupes. Hofmann would bring him a document for sale and he would point out the flaws that signaled forgery. Hofmann would fix it and sell it elsewhere.

Throckmorton said Simmonds was not alone — playing the same unwitting mentor role was Charles Hamilton, who wrote 24 books on forgeries and has since died.

“There are lots of people around with red faces,” Sessions said. “But there’s no need to be embarrassed. He buffaloed everyone.”

“He’s right up there with the five most discussed things about the LDS Church — Hofmann, polygamy, blacks and the priesthood, the Mountain Meadows massacre, and anything happening at BYU,” said Steve Mayfield, of Layton, a BYU grad who works with Throckmorton as a crime scene technician at the Salt Lake crime lab. He admits to being something of a Hofmann buff.

He owns 13 scrapbooks of Hofmann newspaper clips, plus tapes of TV, radio and seminar programs — even hard-to-get prison mug shots of Hofmann. His latest shows the formerly pudgy Hofmann now thin, with long hair and an earring.

Hofmann spends his time now in maximum security at the state prison.

“If he has natural life, that means death in prison,” said John Green, spokesman for the state Board of Pardons, which in 1988 voted for natural life, meaning that particular board would never consider parole for Hofmann.

In 2000, a Board of Pardons with entirely new members opted again for natural life. Hofmann has never granted a media interview, never detailed the location of his forgeries, even though he promised he would in plea bargaining his murder charge.

“He’s excited to have all these people thinking he may have forged something they have,” Sessions said. “So he’s sitting in prison laughing his head off, his final jab at the culture.”