You are here: Home | The Maker of US policy

Given our previous knowledge of President Bush, the suggestion that he believes that God is dictating American foreign policy should be no more surprising than a revelation of the Pope’s Roman Catholicism. And yet, surprisingly, the White House has been fiercely atheistic about such claims. A West Winger has rubbished suggestions by former Palestinian foreign minister Nabil Shaath (made in a new BBC2 series from the distinguished and highly reliable film-maker Norma Percy) that Bush had confided the Almighty’s role as a sort of super national security adviser, a secretary of higher state.

According to Shaath’s recall of Bush’s confession, God, apparently addressing the president each time as “George”, had told him, in three separate briefings: “Go and fight those terrorists in Afghanistan … go and end the tyranny in Iraq … go and get the Palestinians their state and get the Israelis their security.”

While it’s clearly not in a columnist’s interest to encourage other pundits, especially omniscient ones, it would also be fascinating to have the deity’s opinion on whether it should be Clarke or Cameron and just how worried to be about Asian bird flu. But, as a commentator on foreign policy, what’s perhaps most striking is the sudden shift from an Old Testament God (smiting terrorists and tyrants) to such a carefully nuanced position on the Middle East, respecting the key demand of each side.

It’s perhaps surprising that divine revelation should so precisely coincide with state department policy during the Bush administration. A fundamentalist believer would explain this overlap by saying that the president is simply being obedient to God, but it seems rather convenient to have a supreme overlord whose politics so closely mirror your own. The really interesting question for Bush would be whether God has ever told him he was wrong about anything, whether the Maker has broken administration policy as well as making it. 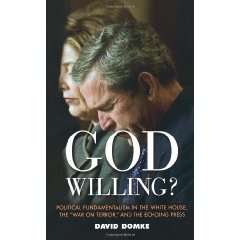 We’re unlikely to get clarification on this because the White House spokespeople seem to have decided, echoing Alastair Campbell’s public line on the possibility that Blair looks to a higher power than Jack Straw on foreign affairs, that “we don’t do God”.

Given British embarrassment about religion, Campbell’s judgment was probably correct, but Bush has spoken openly about his personal conversation with God in the past and in this very week could probably benefit from wearing his sacred heart on his sleeve, as his Christian-right supporters are upset by the nomination to the supreme court of White House counsel Harriet Miers, who is not thought by hardline believers to have put in enough knee-time in public.

But the likeliest reason for the White House’s panic is that they can see the trap set by the Shaath anecdote. Bush’s previous religious admissions have suggested that God was a kind of vice-president, whereas it now seems that George is the running mate.

The political risk of this is obvious. If God is directing American foreign policy, He is presumably also advising on domestic issues, such as supreme court nominations. If so, Bush would face the fascinating task of explaining to the Christian right why God advised against a supreme court justice who was too associated with Christian fundamentalists.

Bush and God
Bush puts God on his side
Bush’ religious language
Church leaders object to casting God on U.S. side
A president beyond the law sets a bad example
Pastor Bush
We Christians ought to be embarrassed
God Willing?
Political Fundamentalism in the White House, the ‘War on Terror’ and the Echoing Press

And, even before the Palestinian insight into his beliefs, we can guess that the president’s theology was in a mess. Throughout his five years in office, Bush has sustained a simple old Sunday-school world view in which external evil threatens American interests and is then met by force which believes it has God on its side. The fact that the perceived aggressors (Bin Laden, Saddam) also feel divinely justified is no more of an obstacle to this belief system than it has been for the religious throughout history.

Hurricane Katrina, though, severely challenges this exegesis. What can a president of such simple religious faith have made of the devastation of America by what insurance policies call an act of God? Whereas even an event as terrible as 9/11 could be sustaining and confirmational for someone of Bush’s apparent Manichean convictions, a sudden drowning of the chosen invites only agonised study of the Book of Job. This affront to Bush’s relationship with God may explain his public bewilderment during the weather crisis.

What we would give to know what Bush’s secretary of higher state said to him after those events. But the president is likely to be less confessional to foreign politicians about these matters from now on.

There’s nothing inherently dangerous about a leader having religious beliefs – politicians can be just as lethal if they believe too devoutly in themselves – but Bush’s alleged conversation with Shaath suggests that the president has kicked all decision-making upstairs. And, even though American politics is theistically inclined, this is understood as too steep a genuflection.